Besides the dust bunnies that reside there between cleanings is a glass topped iron sofa table. It was bought for the front porch but eventually found it's way inside when I decided that the makeshift sofa table that I had behind the sofa could serve a better purpose if I utilized it as intended.
In, therefore, came the porch table. (And I must admit that a glass top on a covered porch on a busy street mens that said tabletop is forever dusty!!!) 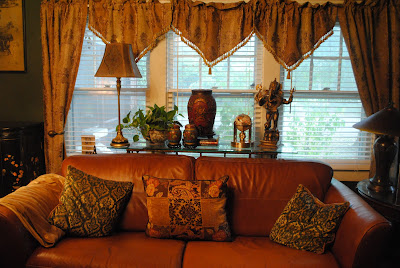 Which we placed behind the sofa. I like the line up of objects in front of the window and it is a great place to showcase favorite items. 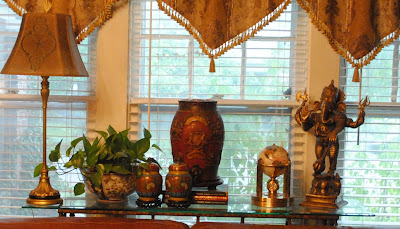 A lamp which casts a glow over the sofa and table and is our "night light" when we go out for an evening (I hate to come home to a dark house and so we always leave a light on in the living room).
An Asian bowl with a plant. It's our concession to fall -- it will reside here until spring when it goes back outside to the porch (the plant -- not the bowl!).
A pair of cloisonne ginger jars. (Husband Jim loves cloisonne and it was my gift to him for the nursing care I received after my first knee surgery). They have some age on them but aren't ancient. You find lots of cloisonne vases but ginger jars are more difficult to find.
A red pottery Royal Doulton "gin jar" from the early 1800's. It was used in pubs to serve spirits (I assume that there are also whisky jars). During the colonial revival of the 20's and 30's many of these were made into lamps. Luckily ours is still intact. A dear and beloved piece.
The globe was Husband Jim's mother's. One of the few things that he took after we lost her. It was a gift from him to her and she cherished it. We do now.
A bronze Asian figure. Husband Jim likes these and I think that the metal balances the lamp on the other end.
It's Tuesday which means that it's Tabletop Tuesday so please join Marty at A Stroll Thru Life to see other tabletops.
Posted by Martha at 5:00 PM

Wow...you do know how to decorate, and cook. (And your wonderful sense of aesthetics shows up wonderfully in the plating of the food in your recipe entries as well.) Being somewhat aesthetically challenged, I'm glad to have come across your site, Martha. :-) I look forward to seeing more!

It's a wonderful arrangement.
I, too, have a particular light that I leave on when we go out in the evening - I like the glow from the outside and the welcome it gives when we come in.

Martha,
How exquisite! I, too, use books to add height in my table displays. The balance and content of your tabletop are gorgeous. Thank you for another inspiring post.
Fondly,
Pat

Lovely tablescape, it looks so inviting and comfy.

Your table looks great behind the sofa! I love the items you have chosen to highlight.

Great tablescape...with a lot of history...that makes it so special!!!

I love putting a table behind a couch. Adding the lamp is wonderful. It creates a special ambiance and your vignette is perfect. Linda

The sofa table is such a fabulous addition to showcase such lovely accessories. I love the beautiful asian jars and the beautiful bowl. The globe is a precious keepsake. Beautiful items arranged in such a lovely vignette. Thanks so much for linking to TTT. Hugs, Marty

I so want one of those tall sofa tables for my family room! I love your arrangement!

What a pretty vignette!

What a warm and inviting space! Everything is arranged to beautifully.

Thanks for your visit today. I hope you are enjoying this beautiful season. Ginger

The bronze figure is the Hindu God Ganesha - he brings good luck!

What a great blog it is!!! You are in truth on your way to colossal success. Well done. top leather couch

Thanks for sharing this article. It helps me to explore new topics.
https://healthexpert.bcz.com/

If you have children you may be surprised at some of the new furniture designs created especially for children. Among these fun and imaginative creations you will find the bunk beds with slides. toddler bunk bed with slide