The frost is on the pumpkin on the prairie -- but not outside -- it has been chillier but we've yet to have a freeze or even just a frost.
But inside . . . the frost was definitely on the pumpkin! 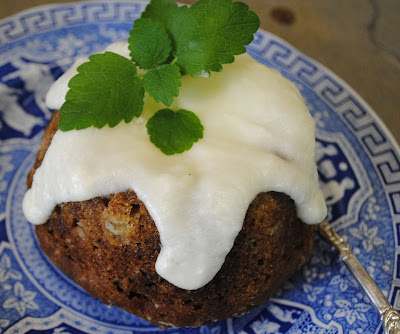 Or perhaps I should say that the frosting was on the pumpkin cake!!!
For the Lunch Bunch, I made pumpkin cakes in individual bundt molds and then frosted them by letting the frosting drip down over the cake. And to gild the lily, I added a sprig of lemon balm for green.
Shamelessly, it was not my idea for I had been to a dinner a couple of days before where the dessert had been a spice cake baked in individual bundt molds and then frosted with drippy frosting.
I thought it was so clever and cute that I made my own version! (Thank you Susie!) 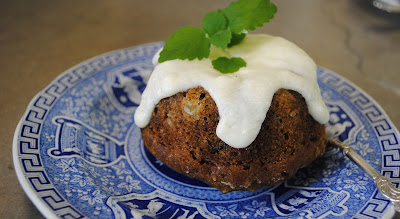 It makes for a great presentation (especially when placed upon a blue and white plate with one of Mrs. Boland's dessert forks to eat it with).
The recipe made 8 small cakes instead of one large one -- so I had some to either give away or tuck in the freezer for my afternoon tea nosh. Those extra 4 I did leave unfrosted!
I do think that you could make it big bundt size and frost in a similar way instead of doing the cakes individually. You'd just need to have a bit more green on top.
Either way -- big guy or little guy, it makes for a great dessert for October . . . or even for Thanksgiving if you're a family that is not overly fond of pumpkin pie.
The recipe I've had "forever" and is a simple recipe. I just made a simple buttercream frosting, thinning it until it was the consistency I wanted for it to drip over the side. I did add some orange liqueur to the frosting for I like to add a touch of booze to icings.
FROST ON THE PUMPKIN CAKE
1 cup vegetable oil
3 eggs
15 ounce can pumpkin puree
1 t. vanilla
2 1/2 c. sugar
2 1/2 c. flour
1 t. baking soda
1 t. ground nutmeg
1 t. ground allspice
1 t. ground cinnamon
1 t. ground cloves
1/4 t. salt
1/2 c. coarse chopped walnuts
Preheat oven to 350. Grease one 10 inch bundt pan or tube pan (or 8 individual bundt pans)
Cream oil, beaten eggs, pumpkin and vanilla together.
Sift the flour, sugar, baking soda, ground nutmeg, ground allspice, ground cinnamon, ground cloves and salt together. Add the flour mixture to the pumpkin mixture and mix until just combined. If desired, stir in some chopped nuts (I did use pecans -- the nut of the prairie). Pour batter into the prepared pan.
Bake at 350 for 1 hour or until a toothpick inserted in the middle comes out clean. Let cake cool in pan for 5 minutes then turn out onto a plate. NOTE: The little cakes took much less time -- probably about 30 minutes. I started watching at 20 and took them out when they were firm to the touch. I forgot to look at the time when I did!
You can sprinkle with powdered sugar (our normal way of serving it) or you can make your favorite buttercream frosting and frost the cake.
It's Friday which means that it is Foodie Friday and so it's time to join Michael at Designs by Gollum to see what everyone else is cooking this Friday!
Posted by Martha at 3:52 PM

The cake looks wonderful! I do love pumpkin and the idea of individual cakes makes it so very special.

The little cakes look so good and it sounds yummy. I would really like one. Hugs, Marty

I want one right now, Martha...they are sooo pretty. I will make mine big for the bunch at Thanksgiving...yummy

Oh my, this sounds REALLY good. I think I MUST try this recipe soon. Love the little individuals but unfortunately I don't have those (Will have to look for them.). I do, however, have two small bundt pans which is one recipe of a larger one. Will make one for now and have one to go in the freezer. Thanks Martha for sharing this recipe.

Oh, goody, I was hoping you'd post a pic and the recipe! I love everything pumpkin and will definitely try these!

They look great, Martha, and your tablescape was beautiful this week! I'm so glad to hear that you're feeling better and entertaining again. And your friends must be absolutely delighted!

I always love an individual serving dessert and these are very cute. Well done!

Love the title of these. So cute.

Martha I love this - especially on your gorgeous plate. So stunning. You're going to love this tour of homes project I'm doing in December. I'll be blogging about it late November. Lots of blue and white. Thanks for stopping by the blog and checking in. Love having you! :)

Your little cakes sound delicious and I love the name of them. We haven't had a frost yet either! I'm afraid our time is running out, though.

your pumpkin cakes look so yummy.
it's bed time in Italy but the sole sight of that delicious cake on thag wonderful white and blue plate has gotten me hungry.
have a great weekend
rita

You like to add a touch of booze to frosting? Sugar AND booze? I do indeed love you, Martha.

These little cakes are so cute!
Also -- I love the big bowl centerpiece on your table with the gourds and bittersweet -- If something similar shows up on my table can we call it inspiration and not copying?
OK, it would be copying ....
Cass

Found that I have pumpkin shaped bundt pans that I forgot I had???? They will be perfect and I hope to make these over the weekend.

Lordy, Lordy girl! You are a baking machine. If I keep trying all your recipes I won't be able to get through the door. Yep, I am trying this one also,
I did make the apple cake. The sheet cake was the test the real thing is going to Garden Club on Monday. I will do a post on it. Hugs, We will try pumpkin cake next week. Ginger

Thank you so much for stopping by my post and for the marvelous pumpkin cake recipe. I look forward to giving it a try. Cherry Kay

What a wonder presentation, Martha. The cake sounds delicious as well. Bob and I have begun our travels so my visits will be sporadic for some time to come. Know that I'll be thinking of you and will become a regular again on my return. Have a wonderful day. Blessings...Mary

Let me know when this is ready. I will be right over. How good this looks.