Pumpkin foods abound in October -- from pumpkin pies, tarts, cakes, coffeecakes, cookies to even soups. Not all are made with "real" pumpkin (pumpkin that I've roasted myself) but rather, alas, with the kind that comes in a can.
This is an early post -- done when I first started Lines from Linderhof. It's Sunday and it's time for Sunday Favorites. So please join Chari at Happy to Design to see other favorite posts this Sunday.
And yes, we will have the pumpkin soup next week! It's time for pumpkin! 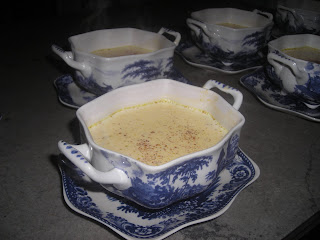 The first cool day in October, we crave pumpkin soup. An easy soup to make for it's not made with pie pumpkins but rather with a can of pumpkin. Pie spices and cream make for an unusual soup which is a great starter for a company Saturday meal. 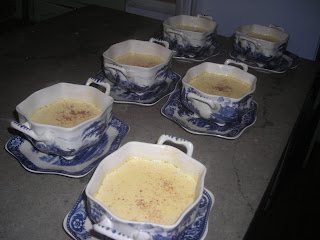 Saute onion in butter in a medium saucepan until tender. Add 1 can chicken broth; stir well. Bring to a boil; cover and reduce heat and simmer 15 minutes.

Stir in whipping cream and heat through. Sprinkle with cinnamon before serving.

Love the dishes and the pumpkin soup recipe sounds delish too.

I've never had pumpkin soup, but it sounds good! I love pumpkin pie, bread, etc! Monday I'm going to the Women's Club Luncheon and they are serving pumpkin soup! If it's like your recipe, I'm sure I will like it!

So nice to have you for Sunday Favorites this week, my friend!

I have never had pumpkin soup but it really does sound delicious. I'll have to give it a try! You mentioned in the recipe to sautee onion in the butter but you didn't list how much onion that you use? Thank you for sharing your pumpkin soup recipe with us for Sunday Favorites!

Have a super Sunday, my friend!

Martha,
I'm beginning to realize it's time for pumpkin recipes. . .pumpkin bread, for sure! Elegant blue soup bowls with their individual trays!
You've inspired me to change out my tablescape and put out my favorite dishes this week! Hm-m-m- or maybe this week we'll put out "Mr. Ed's" favorites? ? ?
Fondly,
Pat

Martha,
What a lovely reprise. I do love everything pumpkin, and pumpkin soup is definitely comfort food!

Oh, this sounds like a yummy recipe. I will have to give it a try!

When we lived in Oklahoma we were invited out for Pumpkin soup. What a surprise it was to find that one of the garnishes was popcorn.
I'm sure the soup is delicious, but anything would be wonderful in those bowls!

Lovely recipe and photos! I like it with apples in it too!