Reprise -- A Tale of Two Plates

A post from November 2008. Interesting that once I acquired all of those turkey plates, I've only used them in 2008. For in 2009, we celebrated Thanksgiving and our 40th Anniversary on a cruise and in 2010, we'll be having Thanksgiving with our son-in-law's parents.
But I do use them a lot in November -- whenever I have company for it is November and November is Thanksgiving. The plates, therefore, don't sit in the cabinet -- unused!
I still don't have the turkey platter or the gravy boat -- but since we weren't home for Thanksgiving in 2009 and won't be home for Thanksgiving for 2010, it doesn't really matter. However, I have moved those two items to the top of my want list! Perhaps if I get them, we will have Thanksgiving Dinner 2011 at Linderhof!
I'm joining Chari at Happy to Design for Sunday Favorites! 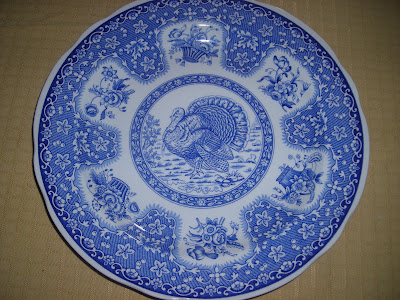 Thanksgiving plates came to Linderhof about 5 years ago when I found these Spode ones on ebay. I have Spode Blue Room and thuse my serving pieces would fit well with these plates so to have a Thanksgiving service, I reasoned, all I needed was the plates.

And . . . since the Blue Room were various patterns, I could use these turkey plates any time of the year if I needed more plates than the Blue Room provided.

There were 8 plates in the auction and once I had those 8 I was happy for I also reasoned that if I had more for Thanksgiving than 8 I could fill in with my Blue Room plates.

But 8 is not normal for Thanksgiving -- 10 or more is and I thought perhaps those NOT having a turkey plate would feel left out. 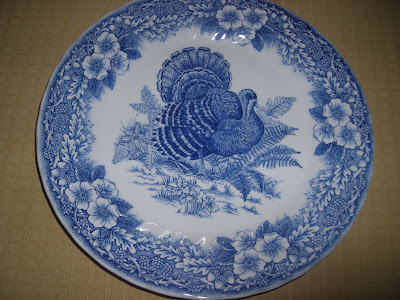 At TJ Maxx this fall, I found these plates by Myott. They're English made, they're blue and white and they were $15 for 4 of them -- so I bought two boxes!

Now I have 16 plates and if we have more than that for Thanksgiving, I still have my Blue Room Plates to fill in.

But like we do with the Christmas china, I have been using these turkey plates all of November -- instead of saving them ONLY for Thanksgiving Day. They have been setting a beautiful table for luncheons all month long. 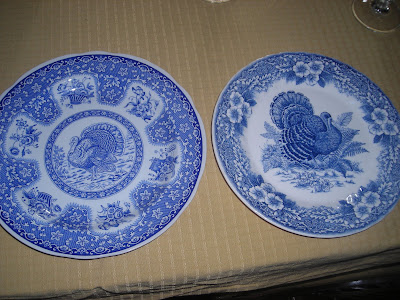 I am a firm believer that the blue and white English patterns are mix and match and I think these two fine turkey plates look well together on the same table.

Now, the Spode pattern (the one on the left) has a platter and a gravy boat . . . .which I think I NEED. I think, perhaps, that it will be a purchase for next year's Thanksgiving.

Today, all of our guests, will have a turkey plate on which to pile the turkey, the dressing, the cranberry sauce, mashed potatoes, gravy and green beans.

It shall be a day of true Thanksgiving at Linderhof as we are thankful for all that we have.
Posted by Martha at 11:45 PM

Both of those patterns are just beautiful. I have taken out my Spode Woodlands Turkey right after Halloween and we are now using them for everyday. Got to get some good use out of them. I loved your Reprise post.

What great plates! I live in the UK, and I've never seen either patterns here.
Out of interest - have you found the turkey platter and the gravy boat yet?

Love the turkey one! Happy PS!

Oh ... you had me at blue and white. LOVE the Spode turkey plates, but those Myott -- I think I like them even better! that turkey is so puffed up and proud.

Right now, Martha, I have finished all the priming of the cabinets, they've had a light sanding, and I'm beginning the first coat of the Biscuit color paint. I LOVE IT.

I can't believe how much better the kitchen looks even with just the white primer on the cupboards.

I've got tables with cabinet doors and drawer fronts all over the place, boxes of hardware, a diagram so I know where everything goes when it's time to put things back ... and I ordered new knobs off Ebay that should be here in a few days.

I think we may actually pull this off before Thanksgiving. Whew! Thanks for the encouragement, and the example of your own kitchen. Yes, old houses need painted cabinets!

Hi Martha
I've never come across a turkey plate before, but your description of dinner is making me very hungry!
Dan
-x-

Oooh...what beautiful dishes! The Spode turkey plate is gorgeous and I love the Myott plates as well! What a great bargain...4 plates for just $15? Fabulous!!! Thank you for sharing your pretty dishes with us for Sunday Favorites!