Growing up in Kansas City, a yearly tradition was the Christmas lights on the Country Club Plaza. We'd drive around the Plaza in awe of the lights -- often once or twice a week and when we visited Grandmother, the Plaza was between her house and ours, and it would be another opportunity to see the lights.
The lights on the Plaza are special -- perhaps because every building is outlined in lights or perhaps it's because of the Spanish architecture and towers that make this lighting display so spectacular.
What started in the 20's as a shopkeeper with a strand of lights over his store has turned into a beloved Christmas tradition in Kansas City as miles and miles and miles of lights are strung along the rooftops and towers of this shopping area.
After my father died when I was just turning 13, money was tight -- very tight. But mother tried to make things special for us and since my birthday was in December, my treat would be dinner out on the Plaza, a trip to Topsy's, and seeing those fantastic Christmas lights.
Dinner was at a drive in for she didn't have money for a fancy restaurant but it's windows overlooked the Plaza and she always managed to score a window seat so that we could see the lights as we "dined".
After we moved south, each December we would try to make a point to drive to the Plaza at least once to see the lights. It was, after all, a Christmas tradition. 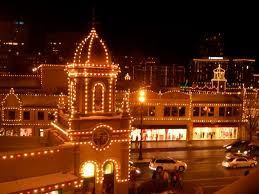 Sunday was my birthday and husband Jim treated me to a day in Kansas City -- we ended up at dusk on the Plaza, at McCormick and Schmick's whose bar has huge windows overlooking the Plaza. He, too, scored a window seat! It was wonderful and in honor of those teenage birthdays at the drive in, I ordered a hamburger!!!! (Of course, this year it came with a martini -- and a dessert called a chocolate bag!)
We drove around the Plaza after and then drove to the top of one of the parking garages and got out and looked at the lights. The first picture was similar to our view which is amazing!
Last year, daughter Sarah gifted me with a superb present. 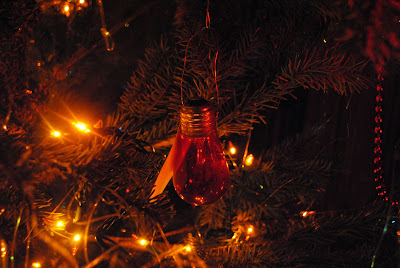 A light bulb from the Plaza lights -- it had been on one of the buildings until it burned out -- then they made it into an ornament. 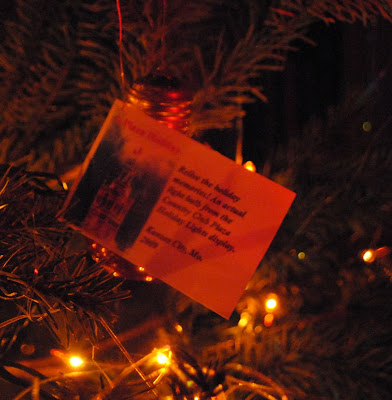 Which came attached with this tag.
What a special ornament for the tree at Linderhof. Memories abound in that light bulb and it has a special place on the tree.
The pictures of the Plaza were not taken by me, alas, because I forgot to take my camera Sunday -- so I "borrowed" them!!!
It's also Wednesday which means that it's Outdoor Wednesday, so please join Susan at A Southern Daydreamer to see what everyone is doing outdoors!
Posted by Martha at 4:47 PM

I love outdoor lights -- they make everything look so magical. The outlined building is great. Jane F

Martha,
Oh My Gosh. . .
we share the same birthday!
Happy Birthday, dear friend!
Thank you for the memory of the Lighting of the Plaza. . .part of my childhood, too!
Fondly,
Pat

Thank you for stopping by. Your home is so mejestic and beautiful. I loved your story of lights. Thank you again for visiting.

One Christmas my aunt who lived near Kansas City took me and the rest of the family to the Plaza to see the lights. As usually I was sick and we had to experience it by car. It was still magical.

Thank you for pleasant reminder of this childhood experience.

What a special gift from your daughter--- she knows you well.

I grew up in KC. The Plaza lights are my favorite KC tradition! I moved to Omaha 5 years ago and so miss the lights. I too have one of those ornaments, it's one of my favorites on the tree.

I love your memories from your childhood, those are the most special times!!

This post was so charming Martha. I loved you sharing the story of the lights in the City as a child and this past week. Oh, and I love Sarah's gift to you last year for your tree. So very appropriate. A truly wonderful Outdoor Wednesday post.

What a very sweet post. Everything looks so festive.

Such a lovely post Martha, it tugs at the heartstrings. Also a thoughtful gift from your daughter.

How sweet of your husband to continue the tradition of a birthday dinner and drive through the lights. Just beautiful!

Happy Outdoor Wednesday!
Love the lights, they are especially wonderful I agree. The ornament and the story behind it are so very special. What a thoughtful gift.

Hallo Martha, Thanks for visiting my blog. The Plaza, Kansas City, seems the place to be at Christmas. Sadly, I've never been to Kansas. But I'm wondering whether you have ever been to see the 'Illuminations' at Blackpool over on this side of the Pond. These are late summer lights rather than Christmas and the whole seaside town is lit with miles of coloured lights and displays of every kind. There's also a tower - a little like the Eiffel Tower - made of iron but not as big as the tower in Paris. Google Blackpool and you may be able to see something.

I share your lovely memory--just from a different place. The day after Thanksgiving, my parents would take my two sisters and me downtown to see the Christmas parade. The colorful lights would have just been turned on and we could stroll the streets viewing them. The stores would stay open after the parade for shoppers and, were newly decorated -- not before Halloween in those days! At that time, not many private homes decorated the outside. But the downtown was glorious! Thanks for the memories.

That's what holiday ornaments are to me- memories. Now you have a sweet reminder on the tree every year.

What wonderful memories. Thanks so much for sharing them with us!