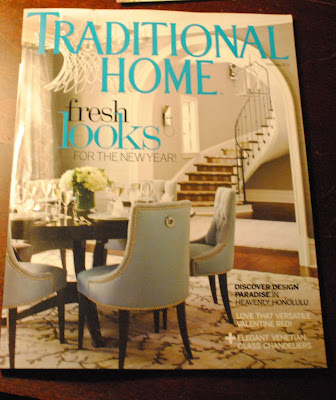 I've taken Traditional Homes for a long long time. And I eagerly await every issue. There always seems to be something of interesting in it's pages month after month. Something was definitely interesting in this month's issue . . . 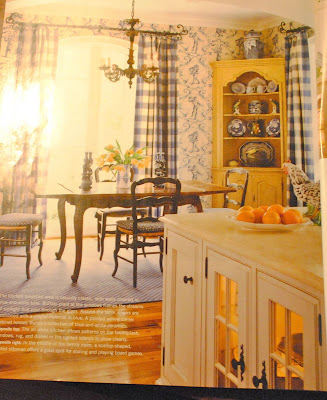 This breakfast room . . . but it's not really the room (although I do like it) that sparked my interest but rather the centerpiece on the dining room table . . . 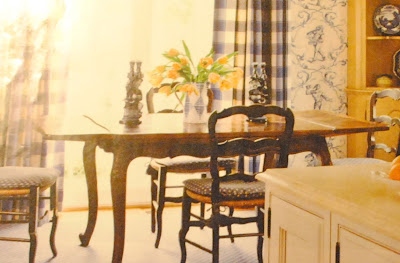 Specifically, the candlesticks on either side of the vase of flowers, because . . . 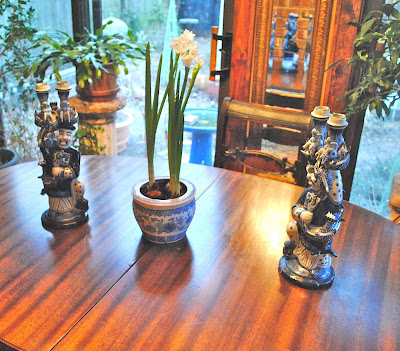 Those same candlesticks are at Linderhof!!!! 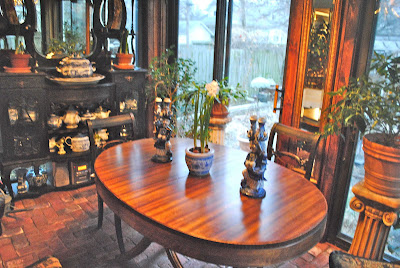 Although I've never had them on the breakfast room table before, I felt that (after seeing them in Traditional Home) they would look good in the breakfast room!
Unfortunately, the index in the back of the magazine showing where things came from did not list a source for the candlesticks.
But Linderhof's candlesticks do have a story. Firstly, we've had them a long long time -- at least five years! They are from Tuesday Morning. We waited a year and a half before we purchased them because they were pricey -- even pricey for Tuesday Morning -- $300 for the pair (original price $600) and so we watched and waited. They were marked down -- but not enough, then marked down once again -- but still not enough and finally, when Tuesday Morning was having one of their half off all marked down merchandise, we traveled to the city and to that Tuesday Morning and they were still there -- and so they came home to Linderhof!!! The price -- $100.
I wonder if those shown in the magazine have as interesting a story as the ones that reside at Linderhof? Or if it was something that the decorator found (for $600) and decided that they would be perfect on that table? Or if the owner has had them (like ours) -- "forever"! I'll never know!!! And if I was the owner of those candlesticks and did pay $600 for them, I wouldn't want to know that someone got the very same candlesticks for $100.
They've been moved around Linderhof a lot -- I think they were first on the living room mantle, they've been on the dining room table and on the dining room sideboard (a picture of them on the sideboard is on the sidebar). And, actually, until I put them on the table for this post, they've been in the corner cabinet in the living room! I think they'll stay (at least for a while) on the breakfast room table -- I like them there!
It's Monday and so I'm joining Blue Monday with Smiling Sally.
Posted by Martha at 6:36 PM

Well you have yourself a treasure there. and your paperwhites look great.
cathy

What a surprise that must have been to see them in the magazine - one of my favorite publications too. They are perfect for your house - of course you had to buy them!

Martha, that is such a cool story! I see Fiesta and Harlequin in magazines every once in a while, but not something unique like your candlesticks. It always gives me a little thrill to see "my" dishes, so it must be even more exciting to have seen your candlesticks.

Great story. I still have not been to Tuesday Morning and there is one not far from here. I think a retail field trip might be in order!

Have a great week.

How fun!! Doesn't that make you feel good.......and know you have EXCELLENT taste!!!

That's exciting to see the same candlesticks you have in a magazine.

Musical Snow Globe is my blue post this week.

It's always fun to sign on and see what you're up to!

What a fun thing! I bet you did a double-take, and looked even harder at that magazine photo! That has happened only twice to me over the years, with 2 antiques I have (one a print of a Victorian lady and one of an unusual table). It's really fun to see the way the magazine designers used them.

Have you ever thought of asking the magazine to do a photos spread/article on Linderhof? Your home is definitely magazine quality!

That's so exciting! Your blue candlesticks are FAMOUS!

They look very nice there and in the magazine too. You definitely got a bargain on them.

How cool to see your candlesticks in print! I like them even better knowing you got such a good deal on them. Tuesday Morning does have its plusses.

oh, boy....I'm soooo glad you got them for a song...well, compared to the original price! yikes!

always fun to know the story behind special items.... ....

I love Tuesday Morning! Your candlesticks are a treasure. I love getting a bargain and then seeing them in my favorite magazine! Bravo!!!
Thanks for sharing!

Love the story about the candlesticks!

Love the story about the candlesticks!