Winter 2010/2011 has had some cold but very little snow. Not enough snow in December to even track a cat!
But all of that changed early Monday morning when snow began falling . . . and falling. . . and falling.
It snowed most of the day and most of the day that snow was big flakes -- movie flakes I call them because they are almost perfect!
It was a good day to stay in (which I did for I'm still cleaning) and I did enjoy breakfast, lunch, tea and dinner in the breakfast room watching the snow. We had dinner there, after dark, but with the outside lights on you could still see the softly falling snow.
And so we awoke today 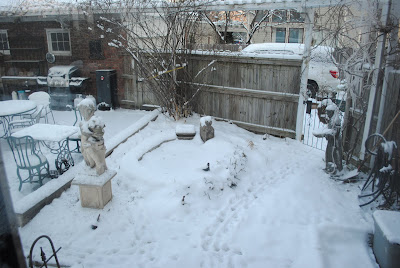 to a totally white world. The snow covered pond . . . 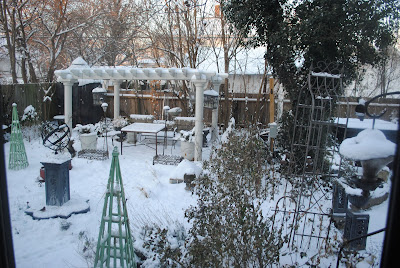 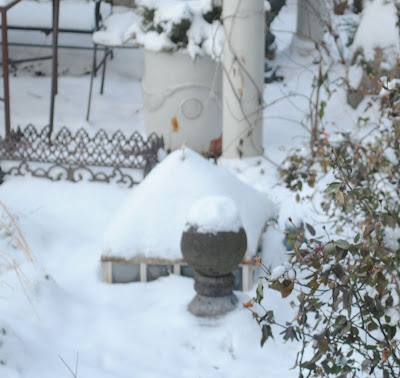 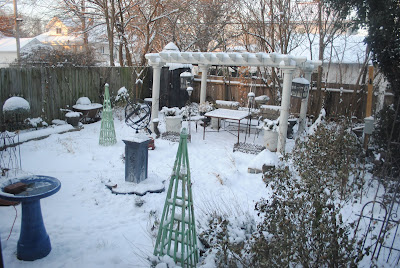 the bird bath (with heater -- daughter Sarah calls it the "bird spa") had a lot of activity this morning and husband Jim went out twice yesterday to fill feeders for the birds were active. He had to go out again this morning for they were once again empty!
I love the snow covered garden -- for whatever I haven't done in the fall is hidden under the white blanket. With my surgeries this year, Linderhof's January garden is much prettier covered with snow!!!
It's Wednesday so please join Susan at A Southern Daydreamer for Outdoor Wednesday -- I'm sure Linderhof is not the only snow covered garden this Wednesday!
Posted by Martha at 3:55 PM

thanks for the tour...my dog insisted I go for a stroll in the garden with her this morning. Winter gardens can be beautiful!

Martha,
So many people clean their gardens at the end of the season. I always tell them to leave something of interest just for this reason. Snow gardens are the purest and loveliest of all! And, Linderhof, once again glistens in the sunlight with it's winter hues! Thank you for sharing this lovely winter post!
Fondly,
Pat

Hi,
I enjoy your blog from time to time. But notice that there are no longer links to your many recipes.... am I just not looking in the right place?
Thanks for reply.
Eleanor
ellie990@optonline.net
(Cold Spring, NY)

Nothing is quiet as relaxing as watching the snow fall.If we continue to get snow we are going to need a "birdie spa" here in the south.
Thanks for sharing

I love a garden in winter - and with all the good 'bones' yours has, it is particularly pretty.
Best to stay inside, just as you're doing, until the ice and snow have passed.

Amazing winter garden. Thanks for sharing.

Your photos are lovely. Cold but lovely.

Snow has covered Toronto this morning. Like your backyard, it's a winter wonderland. A good day to stay in and bake!

Your garden is truly a "Winter Wonderland".