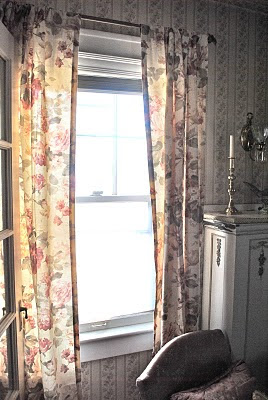 the pink rose curtains, alas, had to go 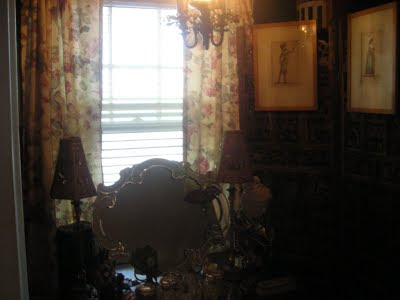 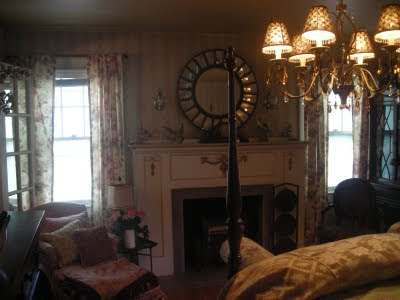 And although I did like them, they did make the master bedroom feel dark! So when I cleaned last week, down came the curtains.
And a trip south to Home Depot, resulted in the purchase of two new blinds.
And so, while watching (or listening to actually) the playoff game (the Chicago/Seattle one), 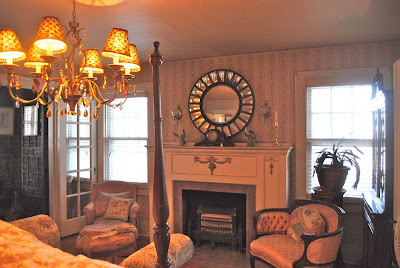 I installed them in the windows on either side of the fireplace. I can't believe how, like the living room, how large the room now feels (although the living room doesn't have quite that "wow, it seems so big" as it first did) 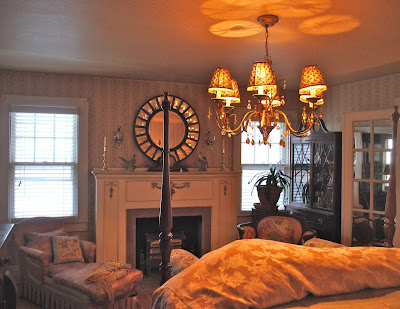 I like the light and the openness of the blinds. And . . . 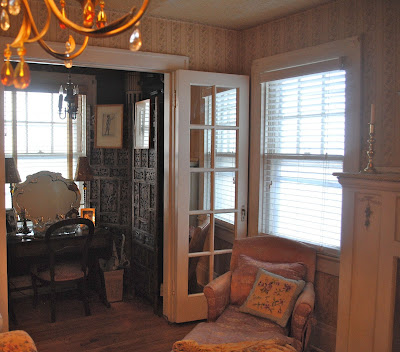 In the dressing room off the bedroom is an original metal blind -- with the big tape. I left it and although there is a bit of a difference between the two windows, I'm glad that I have at least one of the original blinds left!
I have a list of "to do's" which I realized when I did my January deep cleaning but that really won't be changes just touching up, so this is the last "project" of mine for a while at least!
Since it's Monday, I'm joining Susan at Between Naps on The Porch for Met Monday.
Posted by Martha at 4:45 PM

They look great Martha.. We did this across the front of our home last nov. and every time I look in those rooms, I smile..
Your bedroom is so pretty. I'll be happy when I can finally get mine like I want it..
Sonny

I agree - looks great - much more open and brighter!

It really did make a huge change! Really opened up the room.

Martha,
WoW factor, is right! Don't you adore how the "fruits of one's labors" make such a noticeable transformation? ? ? Your blinds are gorgeous and make the room appear luminious!
Are your draperies from the Cheri Blum collection? Mine are titled, Antique Rose from Croscill and purchased 14 years ago! I do believe we have the same one's in our master. . .and yes, I've been looking since Fall for new bedding and draperies! My heart leaps at floral prints, but trying to find something more gender neutral. Hopefully, Spring will bring some new fabric choices to the bedding market.
Fondly,
Pat

Love all the light!

We've tried several window treatments in our old house and I like the wide slate blinds the best. When they are open, the world is right outside our window!!

The blinds look great. I really like the feel they give your room.

Martha, Isn't it amazing what a difference freeing the windows makes? You will enjoy it even more this spring. Even in the photos you can tell a great difference. You have a lovely BR. It nice that you have a fireplace in the space. Your home is so beautiful.
Stay warm, Ginger

I like the airy look of the blinds - they definitely make the room seem bigger and brighter. Well done!

I'm in total agreement, it certainly lightens and brightens up your rooms.

It really DOES make a difference, doesn't it?! How fortunate you are to have a dressing room off your bedroom...

Photos of interiors are very interesting to me. Linderhof is lovely!

Martha...love your bedroom, it does make a big difference. Brighter and sunnier.

Nicely done, Martha. The room now looks quite bright but no less beautiful. I hope you have a great day. Blessings...Mary

The blinds really brighten up the room and are so versatile because you can darken it just as easily! I love my blinds.
Take Care There :0)
Rainey

Wow...taking the drapes down and putting the blinds up...really did lighten and open up your beautiful bedroom! It's hard to believe that doing just "one thing" can make such a difference! I love it!