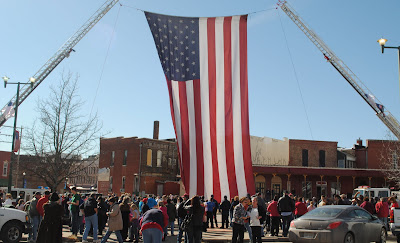 Proudly waiving over the Kansas prairie at Fort Scott, Kansas, the only Kansas stop on the 50 State, Iran and Afghanistan Tour for this flag of freedom.
How proud, we residents of Fort Scott were to be selected to display this historic flag for it serves not only as a reminder of all of those whose lives were lost on 9/11 but also as a tribute to those people who gave their lives to continue to make our country free! 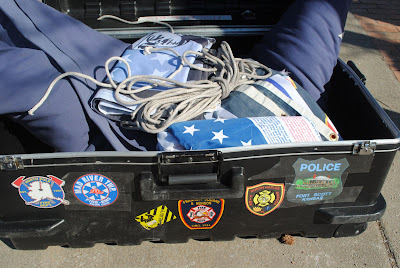 The flag arrived in Fort Scott in it's traveling case, and like any well seasoned traveler, there were souvenirs of its previous stops -- and, of course, Fort Scott, added their own! 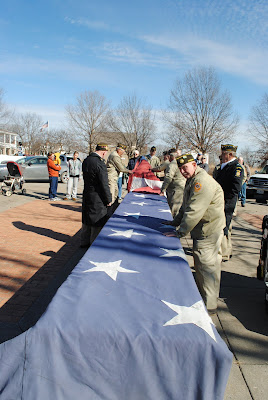 Our local VFW and American Legion helped prepare the flag for it's raising. These gentlemen continue to serve their country as they are called upon daily to do the ceremonies at our National Cemetery for the veteran's burials. Some are World War II vets and some are Korean vets and some are Vietnam vets! 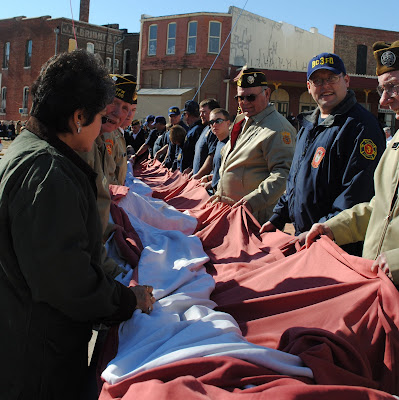 Many hands make light work as the flag is being prepared to be raised. Besides our local veterans, local first responders are assisting. 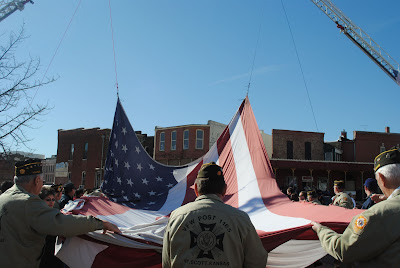 And as The Star Spangled Banner was being sung, 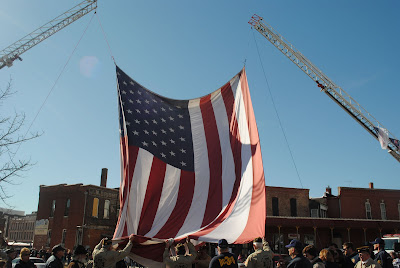 the flag, attached to a Fort Scott, Kansas fire truck and a Nevada, Missouri fire truck . . 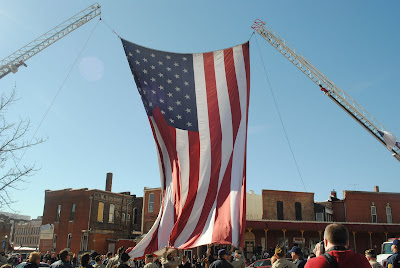 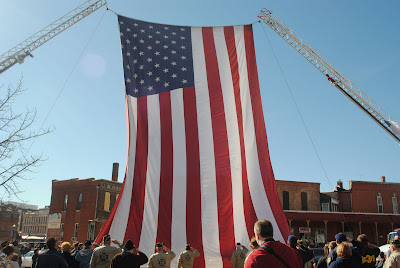 And the veterans and first responders, saluted the flag and all that it stands for.

This is so moving Martha. One of the many things I appreciate about your posts. Visually stirring.

How nice to have experienced that. It makes u have goosebumps!

I'm so glad your event was a success. Great post!
This flag was flown in a neighboring town last month, but the local media neglected give advance notice, so those of us who might have like to have gone to the ceremony were sadly, excluded. Our Portland media, reflecting the city/county government, is dominated by anti-military, anti-government types. They refused to allow the Portland Police Force cooperate with the FBI directly after 9/11. We had an incident of a terrorist bomber here last month, which was, thankfully, thwarted by the FBI and Oregon State Police without apprising the city.
The flag is returning to Eastern Oregon in July, so at least (given the different political climate over there) there will be a large appreciative crowd.

Martha,
This was a precious, moving post! All the men in my family served in the Armed Forces. . .my own "Mr. Ed" being a career man! All their names are on the Veteran's Monument at the Park by the Old Fort there! Thank you for posting this historic occasion in Fort Scott, Kansas!Being a retired military wife, I would have had tears, also!
Fondly,
Pat

Thank You for sharing this moving event. I had no idea it was coming to St. Louis and will now start searching to find the date and place of the event so I am positive to attend.

What a wonderful ceremony that must have been, Martha. I share your pride and tears. I hope you have a great weekend. Blessings...Mary

Oh, this post gave me goose bumps as I read it! What a moving experience and an honor for your town to be host to this event. We need more patriotism and gratitude for our soldiers and first responders. I hope events like this stir that kind of feeling in more Americans.

What a wonderful story! Thanks for sharing!