There are two wing chairs in the living room. One, I've had what seems like "forever" while the other we've had but five years. They're upholstered in the same fabric and even though they're not "twins" they are similar and both are antiques. 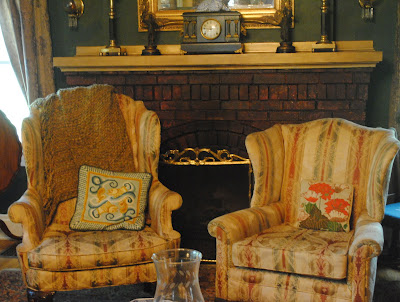 The one on the right is the one we've had "forever" -- it was bought at an auction for $1, reuphosltered in a nice fabric and then 9 years ago reupholstered again. It's got great "claw and ball feet" and is a comfortable chair.

The one on the left is the newer one -- bought five years ago it was upholstered in an awful red and blue fabric -- trendy, I am sure at one time but by the time we purchased it, it wasn't trendy -- it was awful!!! It was the second day of an estate sale and we were able to purchase it at half-price for $25. I am sure that the fabric had something to do with why it was still there for it is really a great chair -- and has some really great carved legs and claw and ball feet.

We were pleased that they still made the same fabric that the older chair was upholstered in and so, four years later we were able to upholster it so that the chairs were a pair. 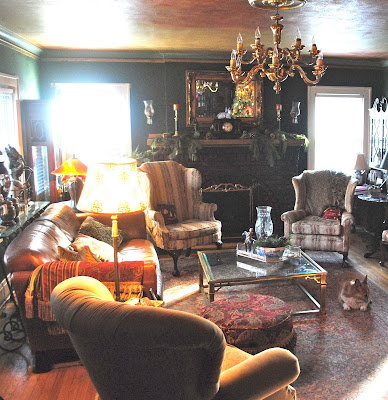 Situated on either side of the fireplace, they are a cozy sit in the winter. We do favor older pieces with good bones -- upholstery can be done over and over again, if you have a good frame and considering that the price of both chairs were only $26, they certainly were a bargain. Adding even the cost of upholstering the chairs and the cost of the fabric, they still were far cheaper than new chairs would have cost.

I'm joining Leigh at Tales from Bloggeritaville for Thrifty Thursday and the only thing thriftier than $26 wing chairs would be free wing chairs!!!
Posted by Martha at 9:17 PM

I love wing chairs and yours are beautiful! It's hard to find a really great chair and certainly worth reupholstering forever! Have not visited in a while--good to "see" you again :)

I adore wing chairs -- Love to look at them, love to sit in them! I had one I was SO fond of that was ruined in a flood some years back; I had just put it in the basement on its path toward reupholstering -- it's rusty red wide wale corduroy was showing its age!
Sadly, Hurricane Floyd had other plans.
And I spy OLIVER in your living room! Love your coffee table.
Cass

Wingback chairs are my favorites for cozy reading! I'm curious about your ceiling. It doesn't look like an ordinary ceiling. Have you done something different or is it the play of light?

Both chairs look as though they belong together. I love wing chairs and have several, my favorite being my mother's Queen Anne wing chair but unfortunately not the most comfortable but I LOVE it just the same. I noticed Ollie as well and he looks handsome.

They are gorgeous and I love the fabric. How wonderful the fabric is still available. Beautiful room. Hugs, Marty

Bonnie -- the ceiling is painted gold with copper highlights in the corners and around the light fixtures -- except for the kitchen, we consider the ceiling the 5th wall and most are painted.

your living room is so pretty. That is great you were able to still find the same material. I love to have things recovered...finding someone who can do it is hard.

Martha,
I'm all for comfort. . .especially at my age! Your chairs are lovely! Here on the prairie, today, we wouldn't need that fire going. Tonight might be a different story! Thank you for sharing!
Fondly,
Pat

Those look like very comfy chairs. How great that you were able to match the fabric years later for reupholstering! They look so perfect together.

The chairs look so comfy and like a set!