Monday, before the snow hit, friend Sally came over for we had to decide on next season's Opera tickets. The Opera's moving and so we had to decide on which tickets we wanted.
And, of course, at Linderhof, whenever anyone comes over, there's always a treat! 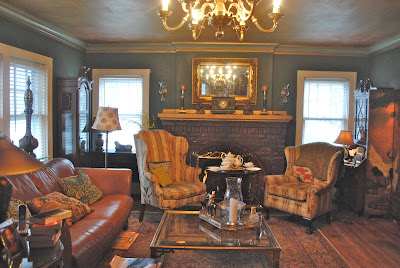 Even though the predicted ice had not started, it was cozier in front of the fire rather than in the breakfast room with its walls of glass and floor of brick.And so a tilt top tea table was moved between the wing chairs and the tea service laid upon it. 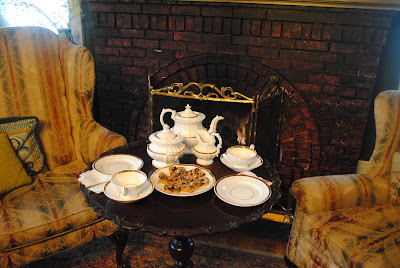 A new tea service!!!
My second love, behind blue and white transferware is white china with gold rims. Started, I think, when I inherited my grandmother's Noritake Marcasite china -- creamy white with a gold band. But it has to be special china -- not just any white and gold china comes home to Linderhof! 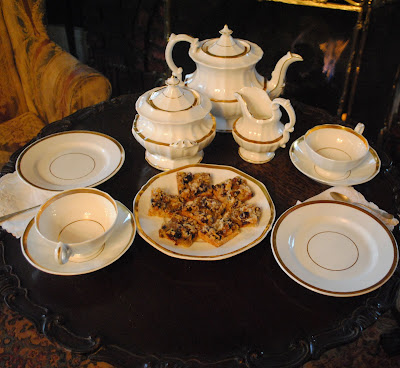 Friday, when I was out and about in our town, one of my stops was The Iron Star (a stop almost any time I go downtown). Many of Linderhof's treasures have come from there! And there . . . on a shelf in the back room was a whole tea set of wonderful white china with gold rims including a teapot, sugar, creamer, large cups and saucers, tea cups and saucers, a bowl and serving plate!!!!
And the price . . . was very affordable! 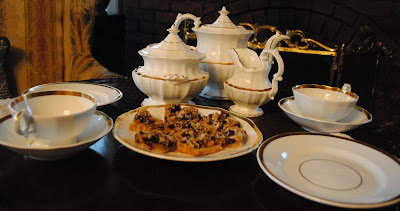 There were no markings on the underside -- which would indicate manufacturer and perhaps age but I felt it definitely had some age on it. Real age.
I emailed pictures to Reggie Darling for he is very knowledgeable about Old Paris Porcelain which I thought my new treasure might be.
He confirmed that it was, indeed, Old Paris and dated to probably 1850!
A true treasure, indeed!!! 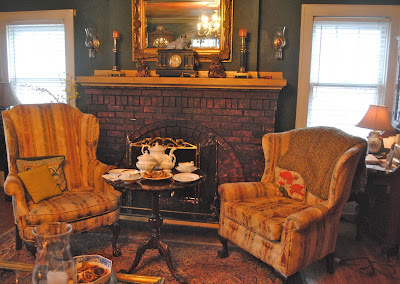 And with Italian Arias in the background, friend Sally and I sipped tea and feasted on these wonderful cranberry raisin bars. That went perfectly with the pot of Earl Grey tea. 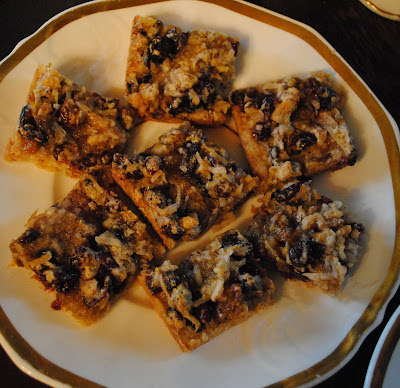 They go together quickly and usually I have everything on hand so it's easy to put together. Sally pronounced them wonderful and I sent a bag home for dessert for she and Bob that evening. For it's hard to eat just one!!!
CRANBERRY RAISIN BARS
1/4 c. butter, room temperature
1/4 c. brown sugar, packed
1/2 c. plus 2 T. flour
1 egg
1/2 c. sugar
1 1/4 cups mixed: dried cranberries, golden and dark raisins
1/2 c. walnuts, chopped
1/2 c. coconut
2 T. Grand Marnier (or orange juice)
1 T. orange zest
1 t. cinnamon
1/2 t. vanilla
1/4 t. salt
Cream the butter. Add the brown sugar and 1/2 c. of the flour. Mix until a soft dough is formed.
Pat the dough into the bottom of an 8 inch square baking pan. Bake for 5 minutes.
While the dough is baking, mix the remaining flour with all of the other ingredients.
Spread the mixture over the hot crust. Return to the oven for 25 minutes or until the edges are lightly browned. Allow to cool completely before cutting into bars.
It's Thursday and so it's time to join Susan at Between Naps on the Porch for Tablescape Thursday.

Martha, the tea service is beautiful! You really have an eye. I have several small plates that match it, given to me by my aunt. She believed they were quite old and may have come from The Hermitage. Yes, I've heard when they don't have markings on the back,that is a sign of age. Congratulations!

*sigh*
Another beautiful tea at Linderhof. I'll have tea with you someday, in cyber space! For now I'll enjoy it all vicariously.

I love tea by fire. I like that table you have to use for tea things. Now that everyone is buried in snow I hope you havemore cozy teas by the fire.

Wow! How wonderful to own an Old Paris set! They are gorgeous! Your setting is so cozy!...Christine

I would rather have a foot of snow than a 1/2 inch of ice any day. We are dug out. Looked like a lot more than a foot, when we saw it piled along our street!

What a gorgeous set! How lucky you were to find it..

Pretty tea scape ... and thanks for the recipe. Looks yummy! Thanks for sharing.

Tea in front of the fire....love it, and you can be sure I would stay there for hours.

A lovely tea set indeed! A great find and a lovely setting aftewards.

OH, looks good! Son's favorite China is the white with gold trim. Hmmm...I really should see what I can find in antique stores and save for him. And the sweets in front of the fire...perfect!

What a wonderful setting you have created by the cozy fireplace.
Your new china is stunning and the recipe looks yummy! I'd love a spot of Earl Grey!

Love your new tea service. You have a good eye for wonderful things.
Love reading the cozy details of your everyday life.

a lovely setting....except for poor Oliver up to his chest in snow...hahhaha..he is so cute.... love seeing his pics and your funny comments in the sidebar....

What a lovely find your pretty gold and white tea set was! I know your guest was delighted to join you by the fire for tea and those yummy-looking fruit bars!

What lovely tea by the fireside!

A fireside tea ... warm and cozy ... your friend is so lucky! Just beautiful and delicious!
xo
Jill

Beautiful china and a perfect setting. Those cookie bars look yummy, I'd love to sit down with you for a spell.

The Old Paris tea service is indeed a special treasure. Great find and perfect for a cozy fireside tea! Thank you for sharing the recipe for the Cranberry Raisin Bars. I'll make them for the Garden Friends for Bible study. They'll love them. Cherry Kay

This is such a delicious and cozy post. If I lived near you, I'd find an excuse to visit as often as possible.

That tea set is perfect--quite a find!

Martha, I just followed you...I do it when I love what I see! Your home is beautiful, I love your white china, yes, my favorites are white with gold, I have a Noritake like it too. The Old Paris set is stunning.
Beautiful tea at Linderhof, I wish I was there for tea by your fire place. Totaly gorgeous and cozy!
Hope you visit me when you have time, your most definetlly welcome.
XOXO
FABBY

Martha, your teas are always lovely. This service is gorgeous. I hope you have a great day. Blessings...Mary

What a cozy spot for tea with a friend. What a great find that pretty china was!

What a wonderful afternoon you planned!! I love the china. I have some pieces in white with gold to mix with my floral dishes.

So what operas did you choose? It sounds like you had a very pleasant task and a great tea time to do it!

We weren't choosing operas we were choosing seats -- the Lyric Opera is moving from it's old headquarters in Kansas City to the new Kaufman Performing Arts Center -- and being season subscribers we get our choice of seats in the new facility!

What a beautiful space and sweet tea set up! I'm off to check out your garden and other Linderhof posts!

Having a beautiful set like that is just the start. It's really the wonderful things you do with it that makes it special, Martha. Lovely as always!

Lovely tea set! What a marvelous find.
I can see it was a wonderful tea, too!

Martha
I'm not seeing a tempature on the recipe...am I missing it somewhere? I made the bars today. I started at 325,but decided to bump it up a little after the first bake took longer than 5 mins.
These are wonderderful! I had to make them when you said they were nice with Earl Grey. That is my favorite tea! I had a bar(or two..maybe!)with tea tonight while playing a board game with my family. Wonderful!


We bumped into your blog and we really liked it - great recipes YUM YUM.
We would like to add it to the Petitchef.com.

We would be delighted if you could add your blog to Petitchef so that our users can, as us,
enjoy your recipes.

Petitchef is a french based Cooking recipes Portal. Several hundred Blogs are already members
and benefit from their exposure on Petitchef.com.

To add your site to the Petitchef family you can use http://en.petitchef.com/?obj=front&action=site_ajout_form or just go to Petitchef.com and click on "Add your site"