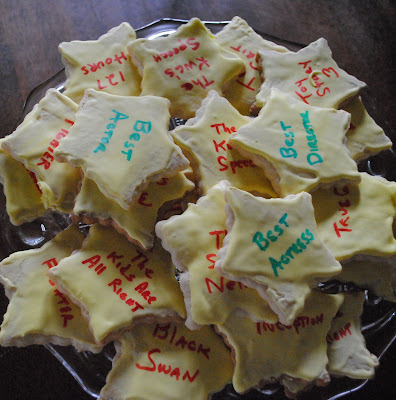 And we're having a "do" at the Liberty Theatre. The Jim's (who are not gems) and their wives are hosting and it was put together as a fundraiser for the Chamber of Commerce. Sixteen very lucky people will walk the red carpet to the theatre where there will be libations and food and fun and games as we watch the Oscars on the theatre screen.
The cookies are one of the desserts (as are moon pies and chocolate dipped strawberries) -- and we have an elaborate array of appetizers to be munched on during the ceremony.
The hosts will be in black tie and the gals will be dressed up as well -- this, after all, is the Oscars!
We've only seen True Grit and The King's Speech -- both Oscar worthy pictures. So we'll be rooting for those and the actors who were also in those movies. Amy Adams (who cut her acting chops at the theatre in the town where Daughter Sarah lives) is another favorite.
It will be a another Grand Evening in our little town on the prairie.
Posted by Martha at 10:45 AM

What a gala evening and moon pies to boot! It sounds like a lot of fun.

I'll try another comment! Your party sounds like a lot of fun - you get up to some serious antics in your prairie town. We'll be watching up here, too.

Sounds fabulous! Have a superb night out :o)

This sounds like so much fun! I'm ready to move to your town!

Oh sounds fun! Is that a old theater? the one in my hometown just was closed and a group is trying to buy it and decide how we can use it....Oscar party sounds fun!

sounds like a fun time I get to watch it on TV.
cathy

Hi Martha, I hope you enjoyed watching the Oscars. And the cookies ook delicious! Thanks for stopping by this evening.....Julian