Not all "Pheasants" are Alike!

One of the quintessential English Transferware patterns is Asiatic Pheasant. Not one, but many, manufacturers produce this pattern. And in my mind, they all go together well.
It is interesting to note, that not all blues are alike!!!! For the manufacturers and their blues differ substantially! 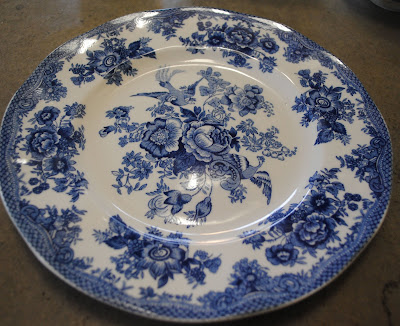 Dinner plates -- made by Johnson Brothers. They're new and they're the typical deep blue and white of so many of the transferware patterns. The "Blue Willow" blue so to speak. I've not had them long -- bought because I adore anything blue and white and I was afraid that I may be short a blue and white plate or two if I didn't get them!!!! They are new (because they're "dishwasher" safe!) 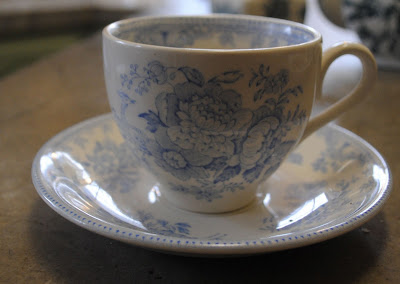 A teacup and saucer by Burleigh. It's a paler blue -- a soft blue. It has some age on it but not much. Asiatic Pheasant is still being produced today and still by many different manufacturers. I only have 3 and would love to have more -- I have my eye on a source or two so I may be able to fill any Burleigh Asiatic Pheasant cup and saucer voids in the near future! 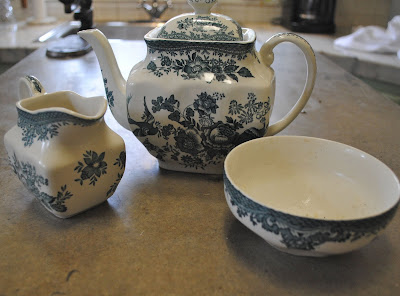 Wedgwood teapot, sugar and creamer. It's more of a teal and it came with tea plates and cups and saucers as well. It's older and I've had it a while. In fact, it was my first Asiatic Pheasant.
These pieces still hold a place in my heart! 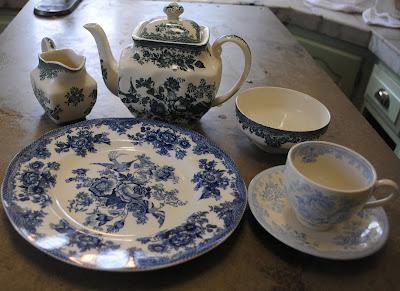 Here are all three manufactures and they go well together because they're all the same pattern even if different hues. I love to mix and match my blues and I also have my eye on some salad plates . . . .
It's Tuesday and I'm joining Tam at The Gypsy's Corner for Three or More Tuesday -- because I have three different varieties of Asiatic Pheasant!
Posted by Martha at 6:29 PM

I love Eng. transfer..wish I had a set, hope someday soon! Your pieces are so beautiful! " Blue Willow" is my very fav. The tea cup and saucer is so sweet and also the tea pots.
Yes, I would have tea in the afternoon with you too.
Meanwhile come and visit My 36th Anniversary China"...I'll be so thrilled to have you.
XOXO
FABBY

I firmly believe that blue and white go with any other blue and any other white - I love yours.

They are lovely, Martha. I am a bit confused though - are Asiatic pheasant and Blue Willow the same?
Blessings, Beth

Your post is most interesting ....learned about the different colors. As I was reading, I was thinking of my blue and white bedroom....the same is true for different blues in the fabrics, too. Ralph Lauren's blue is different from Waverly's blue. Although the patterns are very similar, the colors are different. I hope you find more teacups like the one you have pictured!

No they are not -- the coloring of the Johnson Brothers Asiatic Pheasant though is similar to the color of the Blue Willow -- that strong blue -- not a faded one!

Blue Willow probably has a lot more manufacturers than Asiatic Pheasant because there are a lot of Japanese and Chinese exported ones out there besides the ones made at the English potteries.

Love the Burleigh cup and saucer - think I prefer the lighter blue - more delicate, but they are all lovely.
Liz

So pretty! I love to mix and match! They all go so well together!
~Donna~

Martha,
I was smitten with the tea cup and saucer! Soft pastel hues of blue are exquisite! I don't believe I've seen any of this where we frequent Flea and Antique Markets. I'll be on the look~out next time I go, for sure!Oh, it's a lovely day on the prairie. I bought flower seeds today!Thank you for posting your gorgeous dinnerware, tea pot, and cup and saucer!
Fondly,
Pat

Love your blue and white transferware. Like you, I like to mix and match my blues and white.

So I bought a 3 pieces of asiatic pheasant chinain an antique shop in California awhile back - a dinner plate, creamer and sugar. They are green, a color which I never see online. Is this color rare for some reason? It is stamped Parliament by Premier