We booked a Normandy tour so dinner is chicken, apples, and cream a la normande!

Snow has come once again to the prairie -- it snowed a bit early then abated and in late afternoon it began to snow fiercely.
We always have dinner in the breakfast room -- it's the room of windows and in spring we can see what it starting to come up, in summer and fall, we can watch the birds as they dine, and in winter -- on days like today, we can watch the snow. I love to watch it snow! 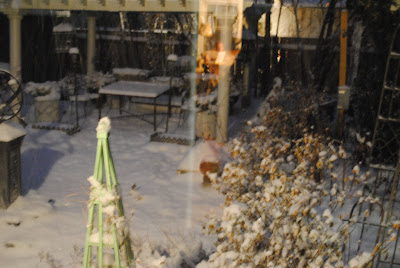 So tonight, when we had dinner, we turned on the outside lights so that we could watch the snow fall.
And dinner tonight, in honor of the tour of Normandy that we booked for April, was chicken, apples and cream a la normande. From Dorie Greenspan's newest book around my french table. 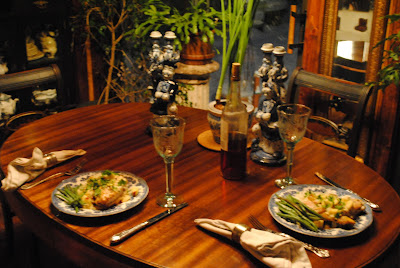 Dinner in the sunroom -- the chicken with rice and steamed haricot verts. With music softly playing in the background, snow falling gently outside, and talk of Normandy inside. 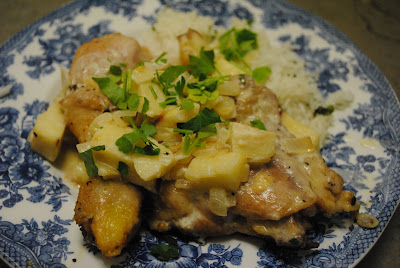 It's not a hard recipe -- it's full of onions, apples and cream. The recipe called for chicken breasts but I had a whole chicken and for the two of us used half of it. It was very good with dark meat as it was with the breast.
Normandy, as you may know, is famous for apples, cider, Calvados, cream, Camembert and butter. This recipe utilizes most of what Normandy is famous for!
CHICKEN, APPLES AND CREAM A LA NORMANDE
Flour, for dredging
Salt and freshly ground pepper
4 skinless, boneless chicken breast halves, without tenders
1 - 2 T. butter
1 - 2 T. olive oil
1 large apple, peeled, cored and cut into 1 inch chunks
1 medium onion, finely chopped
8 mushrooms, stemmed, wiped clean, thinly sliced and slices cut crosswise in half (I didn't have any mushrooms and didn't want to go to the store so my Chicken, Apples and Cream a la Normande was mushroomless!)
1/3 c. chicken broth
2 T. Calvados
2/3 c. heavy cream
Put some flour on a plate and season it with salt and pepper. Pat the chicken pieces dry and run them through the flour, coating both sides, lightly and tapping off the excess.
Put a large deep skillet over medium high heat and add 1 T. each butter and oil. When the butter is melted, slip the chicken into the pan. Cook for 3 minutes to brown the underside, then turn over and cook for 3 minutes more.
If you're low on butter and oil, add a little more now, then toss in the apple, onion, and mushrooms. Season with salt and pepper and turn the new additions around so that they're well mixed and glossy with butter and oil. Cook for 1 minute, then pour in the broth. When the broth bubbles, reduce the heat -- you want to keep it at a slow simmer -- and cook for about 10 minutes, or until the chicken is almost cooked through. (Cooking time will depend on the thickness of your chicken pieces, start checking at the 6 minute mark.)
Turn the heat up again, pour in the Calvados and boil until it's almost evaporated, about 1 minute. Add the cream and keeping the heat on high, cook until the cream reduces by about one quarter, a matter of a few minutes. (If you're concerned that your chicken will overcook, transfer it to a serving platter and keep it warm, covered lightly). Taste the sauce for salt and pepper. If you removed the chicken, pour the sauce over it, if the dish is still intact, arrange it on a platter.
It's Wednesday and time for Outdoor Wednesday -- I'm joining Susan at A Southern Daydreamer for once again, snow is falling outdoors on the prairie!
Posted by Martha at 6:44 PM

The recipe is a delight as will be the time you spend in Normandy. Enjoy your lovely dinner and the freshly fallen snow. Blessings...Mary

This looks delicious..what a wonderful meal to share while watching the snow fall. I'll have to try this recipe!

Martha,
What a lovely view from your breakfast room at Linderhof. I, too, loved watching the snow falling today on my side of the prairie! It was daylight here and it looked like a huge snowglobe most of the day! Breathtakingly serene! Tranquil. Yours with back lighting and background music. . .utterly romantic! Thank you for sharing this wonderful recipe!
Fondly,
Pat

You really know how to beat the winter doldrums--just plan a trip to Normandy and a meal over which to discuss the travel!! Excellent!

Dorie's recipe sounds wonderful and I am not surprised. I made the Leek and Potato Soup this evening from the same book and it was FABULOUS!!! Pared it with a Mixed Green Salad, dried cherries, blue cheese and croutons topped with a wonderful Walnut Champagne Vinaigrette (just found a vinegar-walnut champagne vinegar made by Sparrow Lane that is wonderful)...........I LOVE this book can you tell????

Will try this recipe soon. Thanks for the heads up and oh btw, Normandy????? what a wonderful trip.

Sounds lovely and yummy. I am sick of snow at this point but a lovely dinner is always welcomed.
Cathy

Lovely dinner and you will love Normandy.

Love to read your recipe, full of things I have never heard of before, LOL !
Hugs,
Kammy

What a wonderful meal and time just enjoying each other and your view.

Oh what a wonderful time of year to go. April in France! you will have a great trip and am already looking forward to hearing about it this spring!

Oh, how exciting! you are going to Normandy. Oh, I love it there. We have relatives in Rouen. My grandfather was from Avaranches (near to Mont-San-Michel)
It is my favorite area in France.
Don't forget to take us all along (through your blog).

What a wonderful holiday you have planned...and thanks for giving us all a taste of Normandy to share.

Have a beautiful trip..envious here:) Thank you for the recipe too..sounds delicious.

What a delicious-sounding dish! I know you enjoyed it while watching the snow fall. Sounds like a lovely evening!

You will love Normandy Martha!

This recipe looks wonderful! I'll have to give it to my cook! Ha! Glad you're staying cozy!

I'm so excited about your wonderful travel plans. Dinner at a table with a view of the snow sounds perfect. Thank you for sharing your recipe and for stopping by my post. Cherry Kay

If it has cream in it, I like it!! Your pictures are lovely.