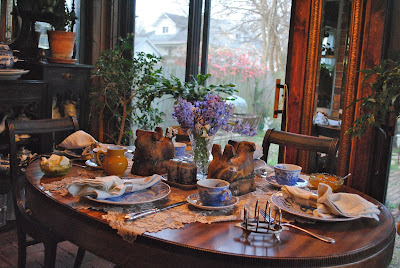 The table, set before we left for church with the Easter lambs, a bouquet of hyacinth, and, of course, the Spode blue and white china. 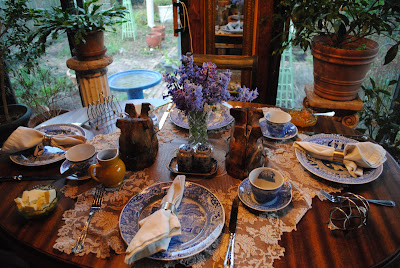 "Toast Coolers" as Husband Jim calls the toast racks (for they take hot toast and give them a chance to cool -- Husband Jim prefers hot toast), the perfect blue and white salt and pepper set (a gift from Pat from On Crooked Creek who visited on Friday), a bowl of butter, a bowl of orange marmalade and the yellow pitcher filled with cream for the coffee. 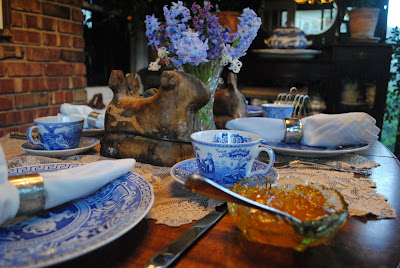 Napkins, of course, in the silver napkin rings, and the bowl of orange marmalade (the only jam served for breakfast. Real Crosse and Blackwell marmalade -- made with Seville oranges)
And the menu . . . the full English breakfast 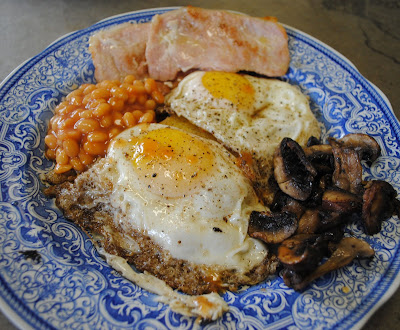 Rashers of bacon (real English bacon bought at a shop that specializes in food from the British Isles in Kansas City), beans (English Heinz beans -- not American pork and beans), sauteed mushrooms, grilled toast underneath the eggs which are cooked basted.
The toast "coolers" filled with halves of crisp English muffin bread toast. We were told that the toast under the eggs are eaten with the eggs and the "cooled" toast was eaten after, spread with butter and orange marmalade.
Normally, we would have a pot of P. G. Tipps with this breakfast but our guests were coffee drinkers -- and only coffee drinkers and so, instead of tea, we drank cups and cups of freshly brewed coffee.
We lingered over breakfast enjoying the antics of the birds in the garden and the company. It's a great way to spend a Sunday after church.
It's Thursday and time for Tablescape Thursday with Susan at Between Naps on the Porch. Join Susan to see what other tablescapes there are this Thursday!
Posted by Martha at 3:43 PM

This looks wonderful, Martha. The table is beautiful and the food looks delish!

Beautiful tablescape and the food looks yummy! Love the rich woods of the English table with the blue & white...stunning!

Except but the pepper on the eggs, it all looks delicious. I'm not a fan of black pepper on everything like most American cooks seem to do. I prefer to taste each individual flavor of the food.
I'd have added grilled tomato haves, which are very popular in the UK. I love orange marmalade, too.
PG Tips is good tea, often served in cafes and tea shops, chip shops and fast food shops. Some of the posh shops specialize in fine tea and it's fun to find the varieties that you like best. I don't like flavored or herbal infusions. Give me a cup of good strong tea and I'm good for the day! My daughter likes "nursery tea", but I like only a moderate amount of milk.
Isn't cool toast fantastic! I love the way butter doesn't melt away on as it does on hot toast. At first, when we lived in England, I thought the idea of leaving the toast to cool was strange, but I have become a fan.
I always know that I'm in for a treat when I see you have a new post.

Martha,
Lovely tablescape! The fresh flowers and all the food look divine. I agree, totally, with Jim...I like HOT toast, too! The salt & pepper shakers appear "right at home" in the Linderhof breakfast room! My journey @ Linderhof will always be a treasured keepsake!
Fondly,
Pat

This is absolutely magical! The lambs!!!!!! So beautiful and PERFECT! Thank you for sharing this and put me down as a "hot toast" girl. Again, the lambs!!!!

Oh, thank you for commenting on my rabbit and hen. They do bring me lovely memories.
This post gave me some wonderful memories of our days in England. I will always think of that time as one of the best times of my life. Your breakfast just brought it all back.
Again, thank you.

This is one of your prettiest tables, Martha! Your Spode always looks so pretty, but in this spring time decor, even lovelier. Your breakfast looks wonderful!

I love your Prairie-style English breakfast! In fact, I believe that you improved on it by serving coffee - tea is my drink, but not until I've had my first cup of coffee.
Beautiful table!

We recently visited England and our favorite part of our trip was the fabulous English breakfasts. The best sausage I've ever eaten, and I don't even like sausage! Oh, and I couldn't get enough mushrooms; hubby couldn't get enough of the bacon. Did you mention the grilled tomatoes - we saw them at every meal (breakfast, lunch, and dinner). My father grew up in Scotland and used to serve me cold toast - I still prefer it that way. Wonderful memories!!

Martha, this really looks delicious. I adore English breakfasts, and your lovely table and wonderful blue and white china and accoutrements are the perfect compliment for this wonderful fare!

What a beautiful setting for a lovely meal!

What a great English breakfast. This is such a beautiful table -- love the classic blue and white.

Wonderful tablescape Martha. I love your English breakfast. You have the luckiest friends!

My favorite "gift" from the "English"--the English breakfast. And, when it's served in such a beautiful setting to good friends, it's even more perfect.

What a beautiful table and a wonderful breakfast. Those S&P, I tried to get those at Amazon and they were sold out. LOVE them. Have been checking periodically to see if they have gotten them back but no such luck. What a thoughtful gift.

This looks wonderful Martha, what a treat! I love your Spode plates. I haven't had a 'full English' for a while, and yours looks very tempting indeed!
Dan
-x-

I am rather partial to an English breakfast myself. Yours looks delicious.

I looked at the Fort Scott blog as well. Very interesting. I don't know American history in detail, exceopt what we get from movies but I know AL was one guy you can all be proud of.Sounds like a great day out.
Thanks for visiting me.

With an English heritage on both sides, my husband and I grew up with eating what we call 'a big breakfast' every Sunday morning.
Sausages, peameal or Canadian bacon, eggs, toast and quite often fried green tomatoes.
Your breakfast looks yummy, hope your guests enjoyed it.

Okay your breakfast looks amazing. I love the wholeness of it. So complete. I bet your friends had the best time. Your table looks incredibly inviting.

Breakfast is my favorite meal and yours looks so fabulous! This makes me wish I had tasted the beans served with breakfast in London... but I thought they would taste like pork and beans. Was I wrong? What is the difference? By the way, what time is breakfast tomorrow. I'm in Mexico right now but I think I can get a flight out!
Karen
Ladybug Creek

The beans are similar to our pork and beans but I don't think they are as salty. I get mine either at a military commissary or at World Market.

Martha, Such a nice breakfast and opportunity to visit with friends. You table is so inviting and your friendship is evident.
Boy, that breakfast looks so good. It could also be a southern breakfast with grits as a substitute for beans. We don't often take the time for a hearty breakfast. When we do it's fun to make it special. Have a great weekend. Ginger

Hi Martha,
Hope this finds you well. This is pretty table and wow the food looks amazing. The born Brit in me would probably love that.
Hope you have a good weekend!
Linda

This blog is bookmarked! I really love the stuff you have put here.