The Garden is All Smiles!

The garden is smiling again! I love March for March means that it is pansy time and I can't wait for the pansies to arrive at the nurseries and garden centers. I'm always eager, probably, too eager. But I love pansies and they are faithful garden friends.
There are some of the winter pansies still in the garden and still blooming. But it is so good to clear out the winter from the boxes flanking the back door and the big window box in the back and put pansies in!!!
At lunch on Sunday someone told me that the garden center had pansies -- I couldn't leave quick enough . . . and came home with three flats! 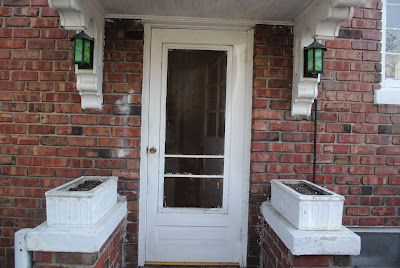 The boxes by the back door. It's a very dressy door considering that it leads to the basement! And via a short flight of steps up into the pantry and finally into the kitchen.
It was bare as I just had greens in the boxes this year. And they've been long gone! 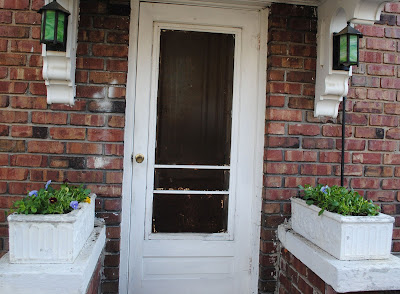 But filled with garden pansies -- they are a bright spot as we come and go (as we usually do) by this door. It's such a pretty door that occasionally, new company will think that this is the front door!!!! 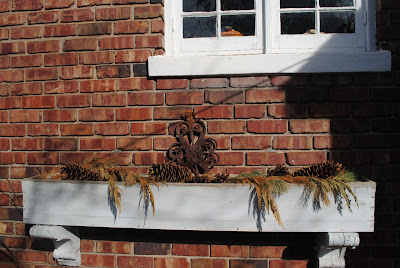 The window box in back -- the big window box that brings so much joy to us as it's seen from the breakfast room. Tired (very tired) evergreen boughs from Crhistmas and big pine cones. It was a great Christmas and January look but it's so sad in March.

But filled with multi-colored pansies, it's a great way to welcome spring!!!! It just makes spring seem all that much closer!
And the pansies -- they can stand a little cold (much better than they can stand a little heat!) and should be fine -- even if a little snow may fall on them (and last year it did!).
I still have the front planters to plant but the evergreens are still looking good and so I will wait a while. I need to replenish the soil in those planters before I plant . . . but I have the pansies . . . . sometimes this week I am sure the front will be as spring welcoming as the side and back!
What to do after a Sunday drive to pick up pansies, an afternoon spent planting them . . . . 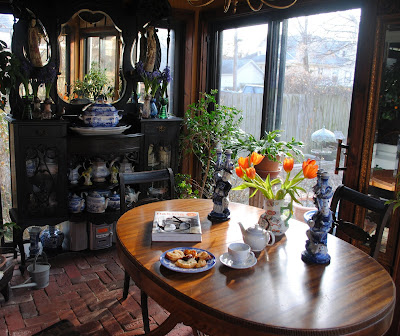 Why have a cup of tea, of course, and a nosh . . . while reading a cookbook, Dorie Greenspan's Baking, From My Home to Yours, in search of a new recipe for a cake for Tuesday when company's coming for dessert. 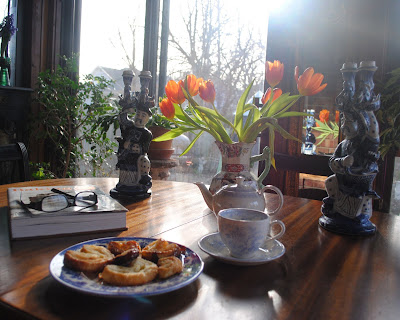 I always have palmiers in the freezer. Easy to bake off for an afternoon treat with a cup of tea. And a new tea plate -- another Asiatic Pheasant in blue. This one is by Royal Stafford and made in England "at the potteries" (or so it says on the back.
I've decided between two cakes but I'm not sure which I'll bake. I don't have to decide until tomorrow so I'll give it some thought.
From winter to spring in the flower boxes is my metamorphosis for this Monday and my tea is the blue for this Monday. I'm joining both Susan at Between Naps on the Porch for Met Monday and Smiling Sally for Blue Monday.
Posted by Martha at 5:10 PM

Your boxes look wonderful! Being that I am a Sales Manager in a Nursery I can fully appreciate your post. I will more than likely getting in some pansies late next week.. It can still dip below freezing here in NJ, but I need color... :)

Now you have me wanting to run out and find some pansies. I would love to have some early color on my deck.

It's a little too soon to find, and bring home, pretty pansies but I enjoyed hearing about yours!

We are expecting a few more frosts so I am hesitant to buy pansies yet, but they do make me smile. Do you have to replace them in the summer or will they be okay with the heat?

Those pansies really brighten up your boxes. Pansies are one flower I've never planted. That's odd isn't it. Hmm. Haven't seen any here yet but I may try them seeing what a difference they've made at your home.

You sound like me! I have already started thinking ..when are the pansies in? Not yet here but I will be like u buying several flats. However I did notice that on the ones I planted in the fall I have a little purple bloom today!

Pansies are so wonderful! Love them each year.
Exciting!

Lucky you! I am very envious... we woke up here in Ontario, Canada to another 3 inches of snow today. I'll just have to come and visit your blog again to get my pansy "fix"! :^)

My garden center has pansies too! I didn't stop this weekend but seeing your pics makes me wish I did-enjoy:@)

Your planter boxes look lovely! Can't wait till it's warm enough to start planting here...just a touch of color is so inviting!

Soooo pretty, Martha! Pansies have such happy little faces! I'm so anxious to get my hands in my pots, baskets, and flower beds. :) Happy MM to you!

Aren't pansies just the surest sign of spring? I have some by the door, and they had a hard time of it in the snow, but they're perking up again. Your window boxes are very pretty now.

I love pansies and they look so pretty in your boxes. Mine survived the winteroutside in hanging planters....Christine

This is gorgeous Martha. Perhaps I should plant some pansies. I am loving the color.

Look at all the green. I am so jealous, as we won't have green for weeks. It is snowing today !
Hugs and have a great week,
Kammy

Your boxes look terrific! We just got 14" last night, so it'll be a while yet before I can start doing any outdoor planting, but I'm living vicariously through yours. Thanks for sharing.

What a great metamorphosis! Well done.

I am having a hilarious Linky party with prizes this Wednesday. Details are on my blog today.
I hope you'll join in on the fun.

Wonderful the way a bit of color just brightens our days.

I love pansies too! Thanks for sharing.

What beautiful flowers! I hope to put some in my planters soon too!
Dee Dee

Oh you are so lucky to have flowers in your boxes! I all looks great.

You're so lucky to be able to plant pansies already! It will probably be the end of March or first part of April here. I love those cheery faces!

!Hope you can visit my My Blue Monday

Martha,
Lucky lady! Our garden centers only have seed potatoes and onion sets. . .not quite what I have envisioned on my front porch and deck! HA! Lovely post!
Fondly,
Pat