We haven't had as much company in the last six months and we felt that it was time for that to change and so last Thursday we had company for dinner . . . 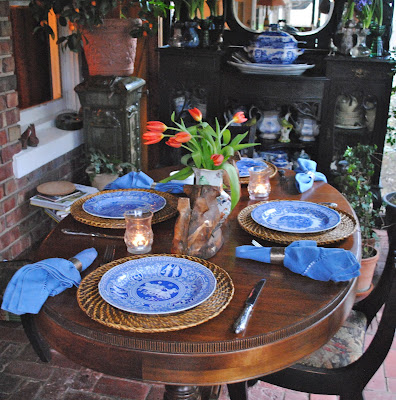 Just one other couple and so four fits perfectly in the breakfast room. 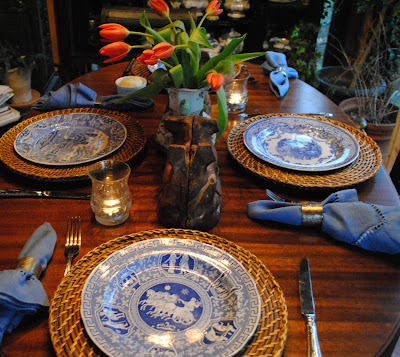 A blue and white dinner party -- the Spode, blue linen napkins in my silver napkin rings, the everyday cutlery. 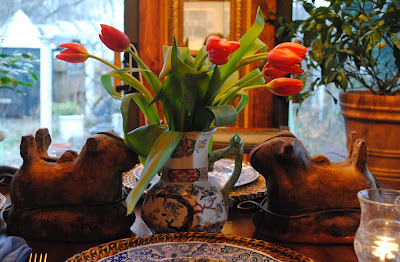 And for a centerpiece, the Easter lambs, the old Mason pitcher full of orange tulips. And candles, of course.
The purpose of the evening . . . 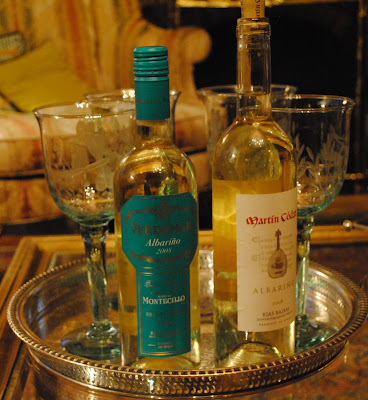 Was to taste two different kinds of Spanish Albarino wine. The other couple likes wine as much as we do and have both have a great pallet.
Our decision -- both were good. The green label tasted more like a sauvignon blanc -- lots of citrus undertones. The white label is made in a town that we'll be going to when we go to Spain later this year. The four of us really liked that one best.
And for dinner . . . 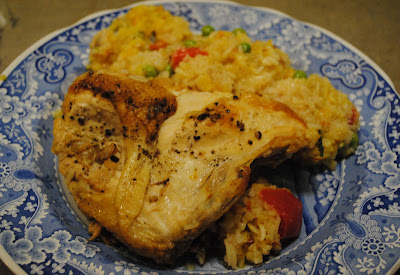 Chicken paella. I've never made it before and adpated a recipe that I found on-line. We all enjoyed it with another glass of the Spanish wine and some crusty bread.
Dessert was Crema Catalana. A Spanish version of Creme Brulee that was wonderful.
It's Thursday so please join Susan at Between Naps on the Porch for Tablescape Thursday -- I'm expecting a lot of leprechauns this Thursday for it's almost St. Patrick's Day!!!
CHICKEN PAELLA
1/2 pint oil
1 chicken, cut to 8 pieces (I used 4 bone in, skin on chicken breasts)
2 bowls of rice (1 pound 5 oz. approximately)(I used 2 cups raw)
5 bowls of meat broth (I used a quart of chicken stock)
1 green pepper
1 red pepper
1 small can of peas (I used a half package of frozen peas)
1 small onion
2 tomatoes
Saffron
1 clove of garlic
parsley
salt
I didn't have a paella pan and so made this dish in my Le Creuset Dutch Oven. It worked!
Heat half the oil and once warm, add the cut up chicken and let it cook for 15 minutes until nicely browned. Remove from the skillet and put aside. Add the chopped onion to the skillet and after 5 minutes, add the diced tomatoes.
Let it braise about 5 minutes more, mashing the tomatoes with a skimmer.
Put in the green pepper (cut to square pieces of half an inch). Add the chicken. Put in salt to taste and the chicken stock, hot but not boiling. Add the rice.
Mash the garlic, the parsley and the saffron with a little bit of salt so that it doesn't slip. Wet it with a couple of soup spoonfuls of temperate water. Put this mixture on the rice.
When the broth has reduced to half, let it rest for about 5 minutes before serving.

Wonderful! I love inviting people in and having dinner....especially tasting wine! Your table looks lovely! I am sure you all had a great time! You must do it again soon. Thank you for sharing your recipe....
Blessings My Friend,

The table the food and the wine....all wonderful!

So beautiful...and nice to see a non Irish tablescape (hey, I had an Irish one, I can say that!) My sons played football against Ft. Scott a time or two! (We use to live in Hiawatha). Your table was lovely. Lori L

I fixed Paella this weekend too. Yours looks very yummy! I so love your blue spode.. a perfect table for an intimate dinner with friends.

I am going to have to look for that wine - not familiar with it. Your version of Paella looks great. I really loved the food in Spain.

I've always loved the Spode Blue Room series...one time I saw a Spode greek plate with the blue and touches of coral...I've always looked for it, but to no effect...some day maybe. Thank you for sharing your charming design and the Paella recipe...and for stopping by my post. Cherry Kay

That looks so delicious and presentation on those plates was perfect.

I love paella! One of the very first gourmet group dinners we hosted I made paella with chicken, shrimp, sausage and clams. A fond memory of a trip to Spain.

What a beautiful table and wine selections!

Martha, your dinner party looks and sounds as if it were wonderful. How nice to get together with a couple of friends in a beautiful setting with good wind and good food!

We love to have paella with several types of seafood. I have a small paella pan for the two of us and a huge one for parties - it's great party food!

sounds lovely. and your table looks so pretty and cozy.
cathy

What a lovely way to enjoy the company of friends, I am your newest follower:)

Paella is on my list of dishes to make this year. Just haven't gotten around to it yet. I find having just
one other couple for dinner works best for us now. Larger crowds are difficult in my space.

Beautiful table! I love your Spode dishes! Dinner looks scrumptious. Thanks for including the recipe. Can't wait to try it.

It all looks wonderful--the setting, the paella and the wine.

Oh how I'd love to your house for that paella on those gorgeous plates!
I'm sure you all had a terrific time!
Thanks for the recipe and see you soon!
Happy St. Pat's Day.
FABBY

Very pretty table ... love the silver and spode with the chargers ... We enjoy wines from Spain ... and love to cook paella over a wood fire outside. Thanks for sharing your recipe. Happy St. Pat's Day!

Where in the world is Jefferson City, Missouri said...

I have to thank you so much for printing the Top of the Tower Irish Soda Bread. I had miss placed my cook book with this in it and I was desperate, since I had to have some by the next day. So thank you so much, your an angel to my day......It turned out great as it always does......I love Ft. Scott......Been there many times. Such a neat town.....Irish blessing to you and yours.

Hi
Your table is so elegant. I love the lambs. I'm looking for some at the thrift store, but nothing as beautiful as yours. Thank you for visiting My Cozy Corner.
xo
Betty

You always invite us with your wonderful pieces at your table. Loving it.

What a wonderful little "trip" to Spain. Everything looks wonderful. Enjoy your real trip later this year!

Delightful table and the food looks so delicious!

What a lovely table you set for this party. Martha. The food, company and wine all sound delightful. I hope you have a great day. Blessings...Mary

Your posts are consistently an encouragement and an inspiration.
Love that you are YOU.

Martha, there you go again with a great table and great food to go with, yum! And I see your old ebony finished piece that matches mine in the back ground, it is a beauty. Hugs, Linda