What a Difference a Year Makes -- Reprise -- Welcome Spring! 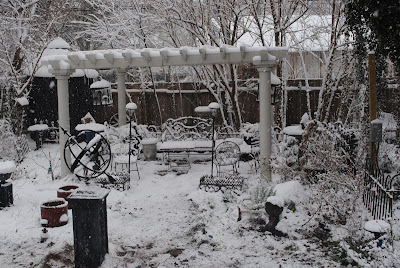 Sometimes in December, and mostly in January but sometimes in February we get snow on the prairie. A March snow is not unheard of but it doesn't happen very often. Saturday mid afternoon, we had quite an accumulation of snow (also a rarity on the prairie -- 3 inches or snow is a good snowfall for us) and the snow kept falling. 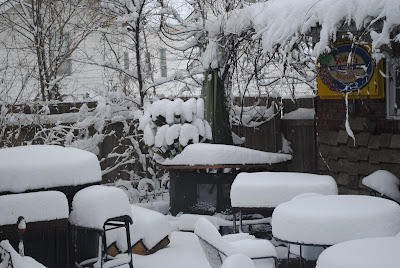 Sunday morning, it had finally stopped and we had at least a foot of snow in Linderhof's back garden. 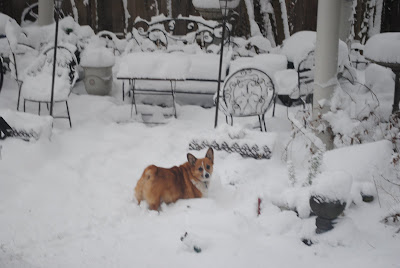 Oliver just had to go out Sunday morning -- and he was not impressed! His tummy was below the snow!!! That is no fun! 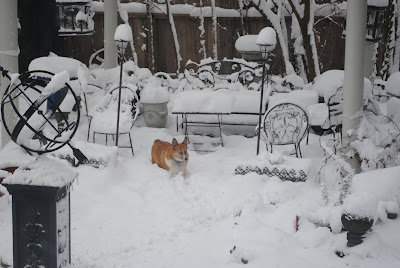 I remember that post, Martha. What a blow that was on the first day of Spring. I'm glad that this year is so much nicer. We are forecast good weather tomorrow, just in time!

I too remember this post. Glad you are seeing signs of spring, enjoy the "pretty" (as we say here in the south) weather!

So often here in NC we get one last blast of Winter and I love the snow but it ruins the Spring blooms! Things are blooming beautifully here! Thanks for again sharing your snowy post! Blessings,
Cindy

after the winter we endured here in the midwest we deserve sun and 70 degrees today! I can't wait!

Makes me so thankful I live in Florida! Happy spring :-)

It's gorgeous though, your garden looks so misterious with all that snow. I love it. Just the same I wish for spring soon for you. Meanwhile you can come visit me at sunny Florida.
XOXO
FABBY

Martha: We have had little snow are quite in need of wet! The little dogger loved that snowy day!

Being from New Jersey, my first reaction was to think that I've seen quite enough snow this year already. But yours is so beautiful, Martha!

Wow...you guys really did have the snow last year on the first day of spring. I don't remember whether we did or not...but suspect that we did! Like you...this year our first day of spring was gorgeous and 70 degrees! Can't beat that! Thank you for sharing this lovely post with us for the Sunday Favorites repost party this week, my friend!