Many years ago, a friend rehabbed the old railroad hotel, The Courtland, in our little town as a bed and breakfast. When it was up and running, she decided to turn the hotel dining room into a restaurant -- first serving lunch and then adding dinner.
She had a signature dessert -- Buttermilk Pecan Pie. It was not her recipe, but rather one that she found in Midwest Living magazine. It was a good pie -- tart and sweet with the crunch of pecans. And although her food were very good, the pie was the reason to lunch there!
And although it had appeared in the magazine, I couldn't find the recipe and I did beg for it but she would not part with it. It was their signature pie!!!
Several years later, she was forced to close the restaurant as well as the bed and breakfast. The day after she closed, she called and gave me the recipe for the pie. I renamed the pie The Courtland Buttermilk Pecan Pie in her honor. 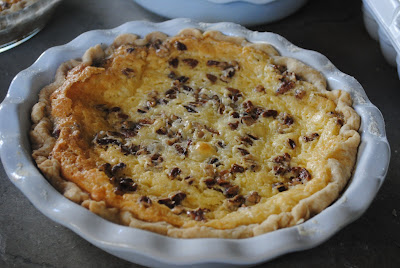 But there is more to the story.
The pie was not a Midwest Living invention. Rather, as legend has it, the pie was originally created for President Harry S. Truman. President Truman was scheduled to come aboard the USS Missouri. The visit also included lunch. The cook on the Missouri knew that President Truman liked chess pie and so he took the familiar pie, changed the milk to buttermilk and added pecans.
Rumor has it that Truman pronounced the pie "delicious"!!!! 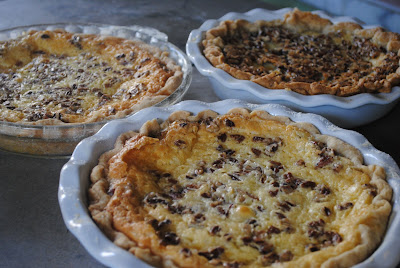 And it is!!! It is often served at Linderhof when we have guests for lunch. And in our little town on the prairie, oftentimes restaurants will have it on the menu. Always called The Courtland Buttermilk Pecan Pie. Paying homage to the woman who reopened The Courtland and made this pie the signature pie of her restaurant.
We make it so often at Linderhof, that often when asked to bring dessert for a crowd, it is our dessert of choice. Making three of them is as easy as making one!!!!
COURTLAND BUTTERMILK PECAN PIE
1/2 c. butter
2 c. sugar
2 t. vanilla
3 eggs
3 T. flour
1/4 t. salt
1 c. buttermilk
1/4 c. chopped pecans
1 9" unbaked pie shell
Preheat oven to 300
Cream butter and sugar. Blend in vanilla. Stir in eggs one at a time. Combine flour and salt and add. Stir in buttermilk. Pour mixture into unbaked pie shell. Sprinkle pecans on top. Bake 1 hour and 30 minutes until pie is set.
Posted by Martha at 6:23 AM

Like President Truman, I think I'd pronounce it delicious too! It combines two of my favorite pies--chess and pecan.

Interesting story, I love pecan pie...but I can't eat it! I am allergic and get deathly ill if I eat it ....DARN!

I'll have to try this. I love pecan pie!

Yum! My Other Mother makes a Buttermilk Pie that I love. I have never heard of one with pecans in it. That sounds like a great idea.

Sounds delicious.
Once, when I was a little girl, we lived in Kansas City. My grandmother came to visit. One day while she was there, Mama said we were going for a ride. She drove us the short distance to St. Joseph. She parked beside a nice old house. We all got out, not knowing what she had in mind. She walked over to a fence and told Grandma to touch that fence. She did. When she asked why, Mama said, "That's Harry Truman's house". Poor Grandma (a life-long Republican) looked like she was going to turn inside out! Then we all laughed (especially Grandma) all the way back to Kansas City. I'll remember that to the day I die.

I love the sweet story behind the pie. I know this must be a really, really good recipe since it has such a great reputation. I'm pleased you shared it with us. It's been awhile since we visited last. Nice to see you again. ;)

I love chess pie, so I will definitely be giving this a try!

I love a recipe with history!