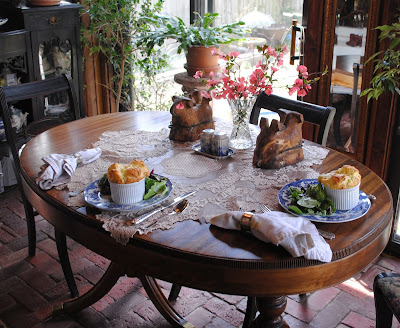 Most noontimes we have lunch at home -- in the breakfast room or in warm weather on the screened in front porch or even the back garden. A sitdown lunch -- not a hurry up and grab and go lunch.
Sometimes it is just a sandwich or soup but oftentimes, it's something I've fixed especially for lunch.
And we set the table with real dishes and cutlery.
For it's a relaxed meal with music wafting gently from the stereo. While we catch up with the mornings doings and share our plans for the afternoon.
I have been so hungry for a souffle. But, alas, a souffle is rather big and souffles do not make good leftovers (although Oliver thinks leftover souffles make good Oliver food!) so . . . I've been going "souffleless"!
Until I bought a new cookbook, The Pleasures of Cooking for One, by Judith Jones. (She, who made Julia Child famous) I bought the book not because I only cook for one but because the recipes were really very very good but the quantity was small and for the two of us I could just double her one.
And I bought the book because on the cover was a souffle!!!!!
On the way home from the city, we stopped by William-Sonoma to buy two required size souffle dishes.
And a couple of days later, for lunch we had . . . 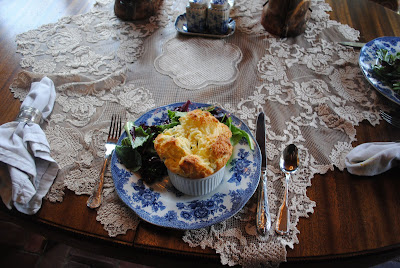 A blue cheese and chive souffle -- which was divine!!!! Blue cheese because it was the only cheese I had in the fridge (other than Parmesan) and I didn't want to go to the store -- the chive because I had a bunch from the garden and thought that they would go well with the blue cheese. 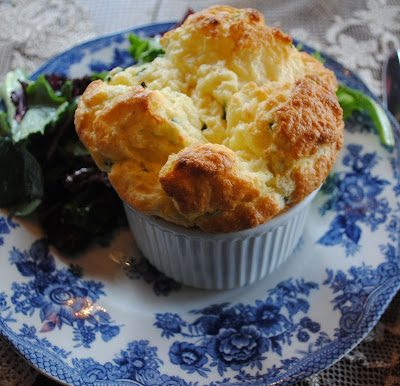 Husband Jim thought it fantastic and we lingered a bit over this lunch. I've loaned the cookbook to friend Sally and don't have the recipe to add to this post. But I will post it when she returns it.
It's Friday and so I'm visiting Michael at Designs by Gollum for Foodie Friday.
If you like souffles and don't have a large number to feed, this is a winner of a recipe and the $35 I spent on souffle dishes is $35 well spent! They make a great lunch (or a light supper) and it won't be the last time we'll have these souffles!
Thanks to Retabug for finding the recipe on-line!!! I've added it below!
CHEESE SOUFFLE FOR ONE
2 1/2 t. butter
1 T. grated Parmesan
1 T. flour
1/3 cup milk
large pinch of salt
small pinch of paprika
1 egg yolk
2 egg whites
1/3 c. grated cheese such as Cheddar or Swiss, tightly packed (I used bleu cheese)
Smear 1/2 t. softened butter around the inside of a souffle dish and sprinkle Parmesan over it. Preheat the oven to 425.
Melt 2 T. butter in a small pot and stir in flour. Let cook over low heat for a minute, then remove from heat. Pour in milk, whisking vigorously and return pot to medium-low heat to simmer for a minute, stirring constantly as the sauce thickens. Season with salt and paprika. Remove from heat and whisk in egg yolk.
Put egg whites in a clean bowl and beat until they form soft peaks. Add a dollop of egg whites to pot and mix in along with about half of the grated cheese. Fold in remaining egg whites and cheese; transfer everything to the prepared souffle dish. Place dish on a baking sheet and set it in the middle of the oven. Turn heat down to 375 and bake 18 minutes until souffle has risen and top is lightly browned.
NOTE: I also added a big tablespoon of chopped garden chives.
Adpated from The Pleasures of Cooking for One, by Judith Jones, copyright 2009.

Oh, I love cheese soufle, I just made one with broccoli too and my hubby loved it! I have a small enough soufle deep dish, just like your individual remekens you bough, only one, bigger. Your table looks wonderful, I love the tablecloth and the whole thing. really pretty. My hubby works at home now, so we have lunch like this everyday, with real everything! hahaha...thanks for sharing.

Do you know, I have NEVER tried souffle! These individual ones look lovely.
Dan
-x-

Martha: That souffle is beautiful--perfectly beautiful! I think taking the time to set a lovely table just for lunch is the ultimate good treatment for one--or two. And, I do hope you left a dreg or two for dear Oliver!!

Like Dan, I've never made a souffle either! They just seemed too complex.
I will be watching for the recipe, as I'm sure DH would love these. Oh & we, too, sit down together at the table for lunch just about every day. :D

I just googled the book & I think I may have found the recipe you used on Oprah's site:

They look delicious! I wish I could just dip my fork through that light crust.

What a great idea. I've never made a souffle, but I wouldn't mind trying a small one.
AT

I'm going to remember that I need to get two individual souffle dishes for this recipe the next time I am in a WS and I like the way that cookbook sounds too. We don't eat nearly as heavily as we use to and it is hard cooking for two. I haven't been able to manage that yet??? DS and DIL who live so very close by are the recipients of many of my cooking adventures. I use to have a cookbook called "Cooking for Two" and I gave it away long ago. BIGGGGGGGG mistake.

These souffles look so yummy! I love the sound of bleu cheese and chives, too.
Tammy

I want to live at YOUR house, especially at mealtimes. That souffle looks amazingly good, and bleu cheese is my fave.

ANd Martha -- you MUST visit Williamsburg. It's so much fun, there's always so much going on, and the atmosphere is fabulous. We went nearly every year when our girls were young, they loved it, and Alida decided in 4th grade to go to William & Mary -- she did get accepted there, but decided (wise child) to take the full ride scholarship she got closer to home.

I was a little disappointed because I wanted the excuse to visit Wmsbg a few times a year. Now my considerate brother has provided that for me!

I am going to try your souffle. I have never made one!
Cass

mmmmm sounds so good! Like the idea of individual ones since it is just the 2 of us here. Thanks!

This not only sounds delicious but looks beautiful! I love the way they are cooked in individual dishes. I'd love to try them!

Martha,
I've never been brave enough to try a souffle, but this recipe looks like I could do it! I'll archive this post for a try when my schedule allows! Thanks for posting..M~m~m~ this looks delicious!
Fondly,
Pat

They look delicious.
A lunch set out like that is normal for us. No grazing throughout the day.

What a lovely lunch you have made! I really appreciate you sharing a souffle for one and will make one in a day or so.
Thanks for sharing. I am a new follower.