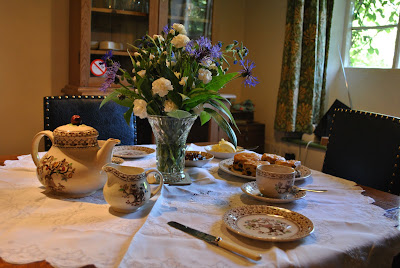 The quintessential British tea is the Cream Tea. Found in little tea rooms all over Britain. They are the simplest of the teas served in Britain and my favorite!!!! For you don't need to don white gloves and a hat to partake of an English Cream Tea in a wee village tea room!!!
We've stopped for tea almost every day while we're in Britain -- whether here at Blue Row or out and about. It's not always a Cream Tea (for we've not walked that far to burn off the calories) but the Cream Tea does remain our favorite.
One of the reasons for staying at least a month was so that we could live in Britain -- not just visit. Thus, we plan on spending at least one day a week at home at Blue Row -- doing chores, reading, needlepointing, enjoying the garden.
Last week found us at home and so for tea that afternoon, I fixed a cream tea. 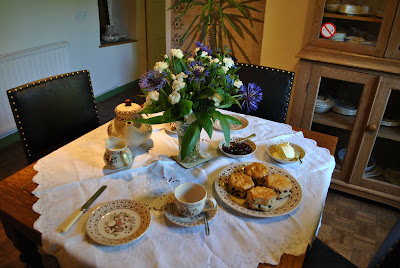 The table in the dining room set for a cream tea. The dishes came with Blue Row and are English, they're by Johnson Brothers, a pattern called Sugar and Spice -- made in Stoke-on-Trent! How I would have loved blue and white -- which would have been so appropriate for Blue Row!!!
The tablecloth is mine -- a lovely tea cloth, a remembrance of our trip and our time at Blue Row.
The white carnations, bought just before we moved into Blue Row have been added to with blue garden flowers. Flowers are meant to be enjoyed inside as well as outside!
An English cream tea is simple -- a pot of tea . . .
And . . . 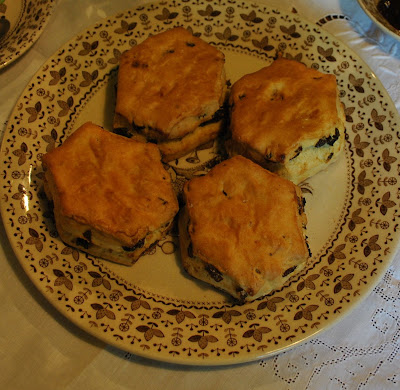 A plate of scones (and I like the fruit ones -- over here fruit means raisins or currants -- they don't put dried cranberries or blueberries in scones!) which are, alas, not mine but rather were picked up at Marks and Sparks (and were quite tasty!)
And . . . 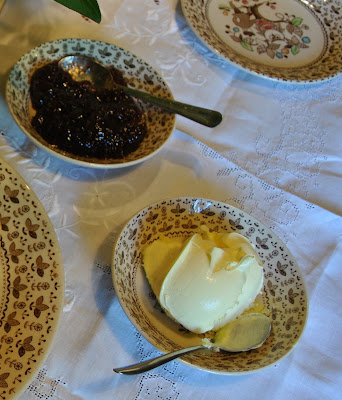 Bowls of strawberry jam (it has to be strawberry) and clotted cream (the real stuff which cost 50 p (75 cents) for a yogurt size container). If you've ever had real clotted cream the fake stuff (which I do serve at Linderhof when I have teas because the real clotted cream costs not 75 cents but $7.50 in America!) palls by comparison! 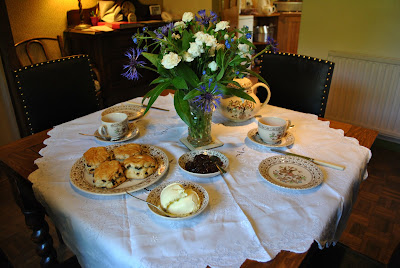 A wonderful respite to the day -- whether at home or at a tea room. Perhaps my next cream tea at Blue Row will be out in the garden!!!
I'm joining Bernideen at Bernideen's Tea Time Blog for her Saturday Tea in the Garden -- England still is a bit chilly to garden teas but at least while we sipped and nibbled we watched the antics of the birds in the garden at the feeder we had bought after we moved in.
Posted by Martha at 10:56 PM

Swooning. Really, Martha, you are livin' the dream. Now all you need to do is find a body in the library, and be off on a good ol' cozy mystery of your own ....

I have been sharing your stories with Howard, hoping to plant a seed for a future vacation, and he keeps reminding me that he can't TAKE a month off. But someday!

it's just outrageous the prices we pay in the U.S and Canada for fake stuff isn't it? ..and, not even good fake stuff at that. So disappointing really.....maybe there are a few things we could try to reproduce somehow that might at least be vaguely similar to the real thing that would taste better than the only fake stuff we are able to purchase.....

I hate to tell you but in my shop the small jar of clotted cream is $9.95 and people gladly pay it just the have the experience on their scones! I see you having this wonderful trip and "living" and visiting England - wonderful! Thank you for this lovely post!

Martha, I am mentally savoring the cream tea along with you and Jim!
Enjoy! And thanks so much for the vicarious enjoyment we are all having along with you!
Francie

How nice, your Cream Tea is just perfect. Thank you for "educating" us on high, low, and cream teas! Your tablecloth is lovely. I am enjoying your posts so much, and the pictures are wonderful. Thanks for sharing with us.

Mmmmm! Nothing better than a cream tea! Love your table cloth Martha.
Cass suggested about finding a body in the library...if you fancied it you may even find a murder mystery evening in your locale - some of the pubs do run them ;o)

You are so right-there is nothing like the REAL cream over there! The Devon cream I've found is $10 for a small jar in Denver! Bernideen's would be 5 cents less! ♥♫

I spent 3 weeks in England a few years back and cream tea was an absolute favorite. The clotted cream was very, very special. The tea rooms were all different and could have moved to the Cotswolds!

Glad you are having a lovely time.

How lovely! and delicious!

I'm taking notes, like so many others. TGD and I are planning our first big trip, with doctor's approval, to the UK sometime in the next year. I'll be calling you for tips!

Martha,
Lovely Tea Time! So great to see you and Husband Jim relaxing and enjoying life together on vacation! Keep the posts coming! Like a great novel...can't seem to put it down!
Fondly,
Pat