The indulgent thing to do in London is Afternoon Tea at one of the hotels -- The Ritz, The Grosvenor, or The Dorchester . . . 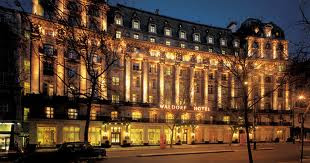 Or if you're staying at The Waldorf . . . . The Waldorf!!!
My Mother's Day present from Daughter Sarah -- A London Hotel Tea!!!!
After a day of sightseeing, we came back to the hotel, freshened up (but no fancy hat or gloves!) and down we went for tea. 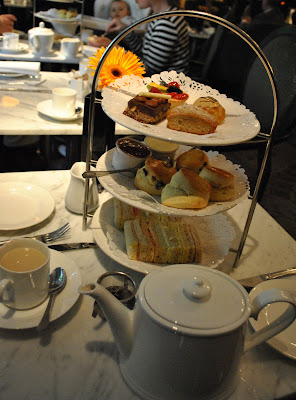 The Curate filled with tea treats . . . 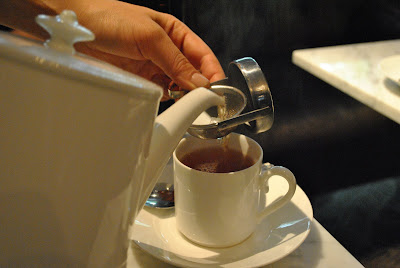 While our server poured our first cup -- no bags here -- it was loose leaf! Our choice for An Afternoon Tea -- Earl Grey, of course!
Once tea had been poured and a half cup drank, we started working our way up the curate -- 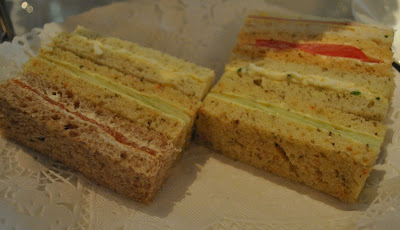 First the sandwiches -- cucumber, of course, tomato, smoked salmon, ham and egg mayonnaise -- all traditional sandwiches and all fixed the traditional tea time way. No crusts and most spread with a little butter to keep the sandwich moist. Which, in my opinion, is the perfect way to fix tea sandwiches! 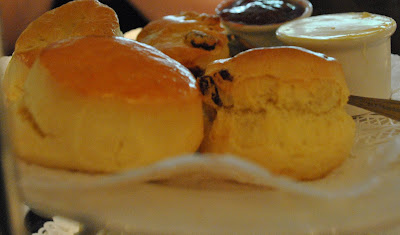 Next the scones, cream and jam. One fruit and one plain. These were the best scones of our visit and slathered with the cream and topped with jam -- pure ambrosia. 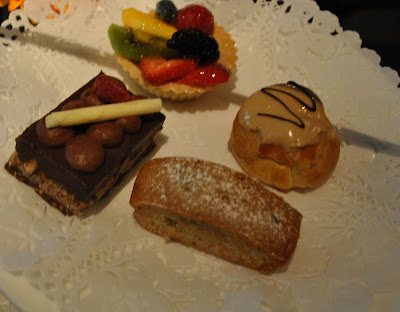 But we had the top layer -- the sweets -- banana bread, a chocolate/hazelnut confection, a fruit tart and an espresso cream filled profiterole. 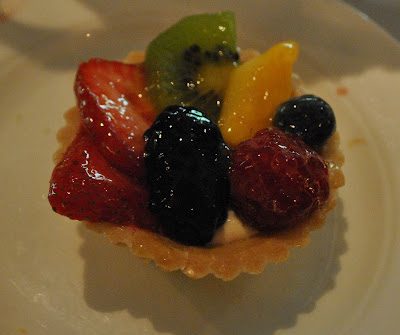 Fruit tarts are a favorite and this was one of the best -- it is perfection!!!
Daughter Sarah and I talked and laughed and enjoyed the afternoon while we drank cups and cups of tea.
After tea, we joined Husband Jim and wandered around Covent Garden -- watching the street performers, checking out all of the booths.
It was the perfect way to end a very busy day in London and I would recommend that if you're ever in London that you make a Hotel Tea part of your day!!!!
There was one souvenir that I wanted to take back with me -- a tea caddy preferably one from the mid 18th century.
I've been on the hunt for one at every antique shop or center that we stopped at. And then . . . the day before Daughter Sarah and Andy arrived, I found two that I liked.
After much consideration, I decided that one of those was the one! And so, after we said goodbye to Daughter Sarah and Andy, we went back to Stow (Stow-on-the Wold) to see if it was still there --
And it was!!! 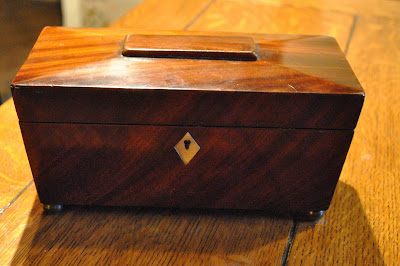 It's mahogany, mid 18th century and not large. It has the patina that 160 year old mahogany acquires. 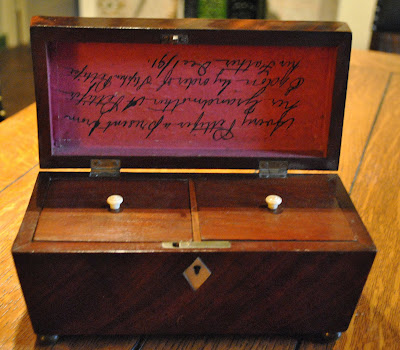 It has two compartments topped with what I think is an ivory rose.
But the real reason that I thought it was "the one" was the inscription in the lid . . .

"Avery Pettifer's present from her grandmother A. Pettifer Eydon by order of Stephen Pettifer her Father December 1/91".
I think that perhaps when A. Pettifer Eydon got married that her father, Stephen Pettifer gifted her with the tea caddy. And "ordered" A. Pettifer Eydon that it be passed to her granddaughter when her granddaughter married. And so Mrs. Eydon did so on December 1, 1891. It's a lovely story, methinks, and what happened to Mrs. Eydon's daughter and Avery's mother, I'll never know.
But that inscription makes the tea caddy ever so much more precious!!!
My most delightful memory of what is the vacation of a lifetime -- a dream come true!!!

Lovely post. And what an amazing find. It certainly is a great treasure.

Hi Martha,
What a lovely tea you enjoyed. The sandwiches are divine. I love the treasure you found. What a perfect treasure to mark your perfect tea.

Thank you for stopping by and your kind comment. It is so nice to meet you.
Have a great week.
Hugs from Texas, Celestina Marie

I would of chose that tea caddy too! Not only is it beautiful, but it has a story to tell...I love it!!

I was fortunate enough to have high tea at the Ritz with my Mom, and day I will never forget!

It is so wonderful that you are having all these fabulous experiences in England. I have never had tea at one of the London hotels...maybe next visit.
Your tea caddy is absolutely a treasure! I am glad that you have been able to fulfill a desire for one, and an amazing one at that! I too, love the inscription on the inside, it does make it extra special.
Hugs,
Terri

Your tea with daughter was lovely. Your tea caddy.....fabulous. Glad you are having a wonderful time.

I will be going for tea this year at Bettys in North Yorkshire I am very excited about it. Even more so looking at the lovely time you had. And your tea caddy is beautiful

Hi Martha,
What a wonderful holiday you are having! The sandwiches look delicious and I'm sure the tea was just as good as it looked. The tea caddy is lovely and what a find! Thank you for sharing your delightful outing with us and thank you for joining me for tea today.

Glad you enjoyed Burford & Stow. We stayed in Chipping Norton for 2 weeks last year on our annual shopping trip...woke up May 20th to 6 inches of snow! Hope the weather's better this year!
Love the tea caddy. I have an old battered one that needs some TLC. Yours is indeed a treasure!
Ruth

What a lovely old tea caddy. I have seen a few on those British antique treasure hunting shows on the tv, but never in person. Your hotel tea fare looks amazing... such dainty little tea sandwiches, tarts and assorted goodies. I love scones with clotted cream and fruit. My Canadian friend, who enjoys everything done the British way, will love seeing these pictures.

Taking your advice this summer, Martha. Had a few afternoon teas while we were in Vancouver and surrounds.

This is such an amazing treasure! My friend had one in Virginia but not with that lovely inscription!

Also...your tea was fabulous too!

Your new found tea caddy is awesome with the writing inside.
I felt like I was right with you to enjoy all the treats for your tea, glad you shared the day with us.
Judith

Your messages bring back lovely memories of our trips to England. The tea caddy inscription was intriguing.

Do you use ancestry.com or familysearch.org at all? There are several references to your (tea caddy) Pettifer family (Eydon is their early village) on both these sites. Thomas and Ann Pettifer had several children: Avery (1837/died at two months) George, William, Solomon, Stephen (1842), Avery (1844/second) Andrew, Elizabeth, Judith, Mary (I think),,,, There is some gender confusion with second Avery whose birth record says “male” but a census six years later describes as a “daughter.” I image this shows that British census reports are as fully reliable as American census reports.

The family is first recorded in Eydon and then in Crudwell at Mayfield House ( now a Best Western Hotel). The family manufactured and sold veterinary medicines--first Thomas Pettifer and Sons and then Stephen Pettifer and Sons. They held the royal warrant for Santovin—a worm drench for sheep. (Now that’s a neat fact that one does not see every day.)

(Tea caddy) Stephen married Mercy and their daughter Avery was born in 1876. The inscription is a little confusing because grandmother Ann would have been dead for decades before tea caddy “order” and presentation were made ( I think—only had time for a quick review of records). Avery married in 1907 but groom’s name not recorded on record I found.

Do not know if you are near Crudwell and Mayfield House and would have time or want to see where your tea caddy had lived before your purchase.

I wonder of course how this caddy with its inscription left the family. That’s the intriguing mystery of historical research.

Thank your for the descriptions of homes, hotels and gardens. Such a beautiful country. Hope you enjoy the rest of your trip—and perhaps can fit in a side visit to Mayfield House. Carol

What a wonderful gift from you daughter. A tea to remember for sure.

We would have bought the one with the inscription also. It somehow makes it so much better.
AT

A yummy tea and a take home tea caddy are the perfect way to celebrate tea time ! I love the tea caddy especially because of the inscription .