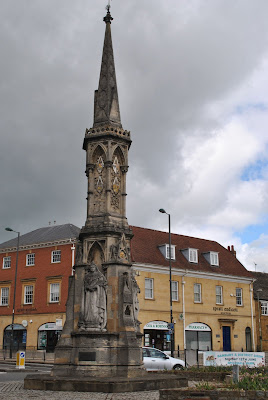 This cross is at the intersection of four major roads -- those to Oxford, Warwick, Shipston-on-Stour and the High Street. This cross was built to commemorate the marriage of Queen Victoria's eldest daughter, Victoria Adelaide Mary to Friedrich Wilhelm of Prussia.

And on the way back to town from viewing the cross we walked through a wonderful Edwardian neighborhood. 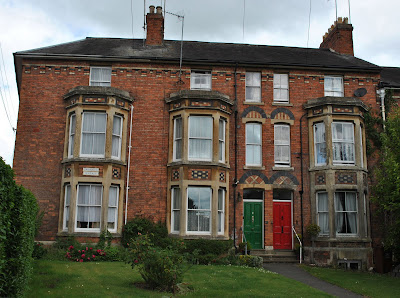 Love these old houses -- and each owner personalizes their door their way -- one green and one red! 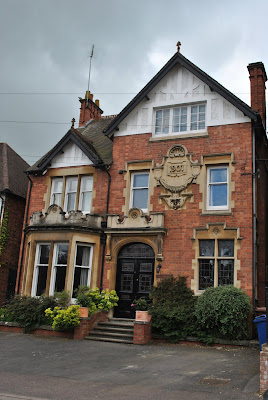 After a good walk around Banbury (where we searched in vain for a Banbury tart -- where, oh, where, were the Banbury tarts?) we headed out to the country to tour country house and gardens.

A magnificent house built in the golden age of country living by the heir to the Shell Oil fortune, Walter Samuel, an avid art collector.

There had been houses on this site since the 15th century and the basis for the current house was built in the 17th century, with additions in the early 18th century. Lord Bearstead (Walter Samuels) bought the house in 1927 and remodeled the house into his ideal of the perfect country house.

It is truly magnificent! 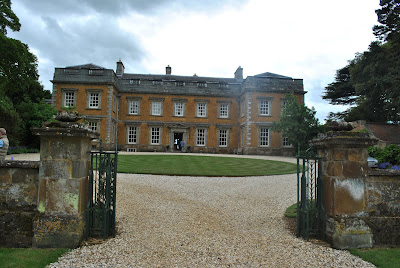 Owned by the Holbech family who still lives there, they acquired the estate in 1684 and the honey-coloured two-storey stone house was built soon after.

No pictures were allowed inside the house -- it was after all a family home -- with stacks of magazines near chairs, a TV remote on a tabletop and the rooms had a lived in air that other tour houses seem to lack.

I told Husband Jim that I could definitely live in Farnborough Hall -- he smiled and said "of course, you could!" But he knew what I meant -- that although it was large it wasn't too large and it did have a homey atmosphere about it. 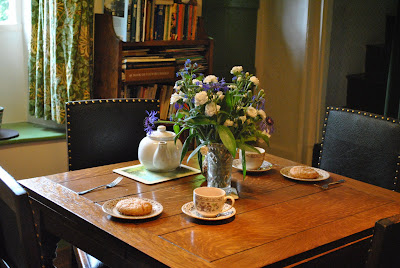 Served properly in cups and saucers at the dining room table -- with Eccles Cakes which we had picked up at the bakery. 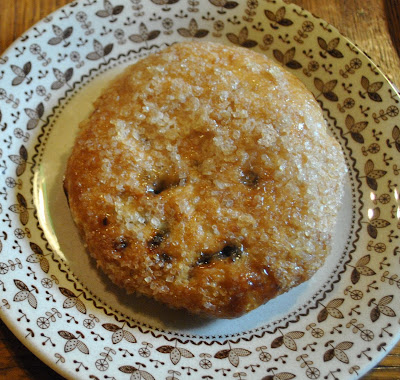 They were very good and went wonderfully with tea!

It was a good Saturday outing in England -- a cloudless blue sky gave way to darker clouds and spitting rain and a good chill in the air! But it was still a fun way to spend a Saturday!
Posted by Martha at 12:27 PM

Oh what a beautiful trip! I love those old English homes too...I would live there too. Thank you for the tour and your tea looks delish with the Eccle Cakes. I'm at Pink Sat., hope you can come over.
Hugs
FABBY

Eccles Cakes.....new to me so I Googled it. Up came pictures, recipes and the history behind them. I sure am enjoying this education. :)

I look forward everyday to your adventures. Thank you for posting your lovely pictures. So fun!

We've driven through the intersection at Banbury cross on many occasions but I've never stopped there - you're certainly showing some lovely homes.
Eccles cakes are my hubby's favourite - I'd better not share this post with him ;o)

Eccles cakes are my very favorite English sweets. When we lived there I bought them all the time. When we moved back to the US I made them for myself. Nothing better!
If you can, be sure to bring back several boxes of English "mixed spices". The combination is what will make your English cakes taste authentic.
I deleted the first one, because I forgot to tell you how much I am enjoying seeing your posts from England!

This is so nice to England through your eyes and camera lens. I doubt I'll ever see it in person so I'm loving your posts, especially your tea today. My husband's great aunt who was from England served home made eccles cakes and would never dream of serving tea in a mug, only good bone china teacups.
Judith

Can you get Ecces cakes in Kansan? Most bakeries carry them here - but then Victoria can be more English than England!

Actually, Pondy, there is a store called Brits in Lawrence (about 1 1/2 hours from my part of the prairie that carries them and they are good but are commercial (think bagged chocolate chip cookies) and not like the bakery ones I got yesterday.

Priscilla -- thanks for the tip about the Mixed Spices -- I'll have to look for them when I go to the market the next time!!!

I think I could bring back a whole SUITCASE of food items!!! Not including clotted cream and double cream which would be a whole COOLER by itself!

Looks like you two are still enjoying the delights of the Cotswolds. I haven't had an eccles cake in years, the perfect treat with a cup of Yorkshire tea.

Martha,
Lovely homes and yes...the nursery rhyme was a favorite of mine. I always wanted to ride the horse with bells on! HA!
Fondly,
Pat