A Tale of Two Castles

Of knights in shining armor and princesses fair, that is the romance of castles. There are Disney castles (Prince Charming and Cinderella) and then there are real castles.
One of the gems of England is . . .

Warwick Castle. It started as a motte-and-bailey castle (the remains of which is across the lane from Blue Row) -- with a mound, wooden buildings and enclosures. But then stone fortress towers were built, then curtain walls became added and then it was developed into a lavish palace.
Warwick, for most of its history, has been home to the Earls of Warwick until 1978 when it was sold by the 8th Earl of Warwick to The Tussauds Group, who undertook major restoration work on the buildings and furnishings. Under their management, Warwick Castle has become one of the most popular tourist attractions in Britain. (Think a permanent Rennaissance Festival).
It was Saturday and the castle was full of children waiting in line to go to the Princess Tower or the Scary Dungeon.
We toured the State Room and found in one of them . . . 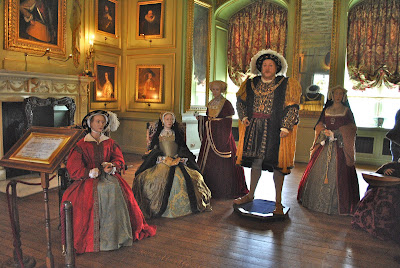 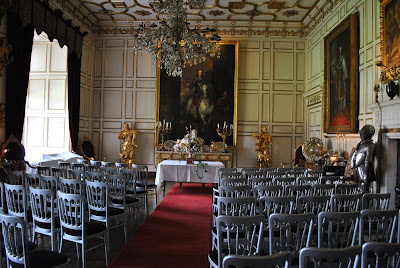 The grand dining room which was set up for a wedding that was to take place this afternoon.
And on the grounds . . . 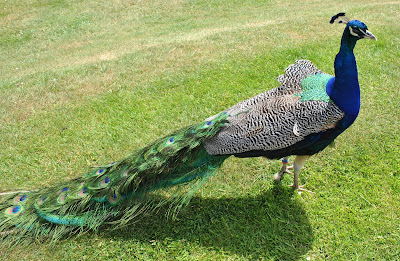 One of the peacocks. There was a whole garden devoted to them!
We then headed five miles away to another castle -- 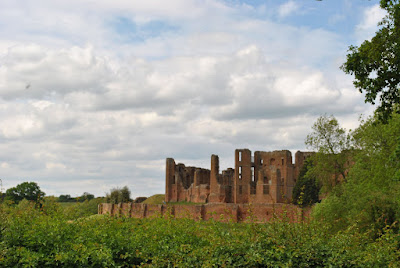 Kenilworth. Which lies in ruin. For Kenilworth, which also started out as a Motte and Bailey, for most of its history, was the King's own castle in the region. Thus it provided a base from which the King could watch over his barons, both in Warwickshire and other parts of the Midlands. Because Warwick was a provincal castle and Kenilworth a royalist one. Kenilworth suffered a different fate. 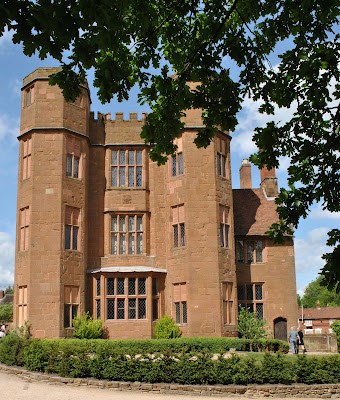 The gatehouse, which was somehow spared, and which became a private residence. It no longer is and is open for tour and exhibits. 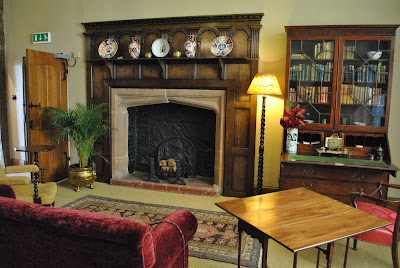 The very livable "living room" of the gatehouse.
After tromping around two castles, it was time to stop for tea. The Stables at Kenilworth was the perfect spot for a "cuppa". 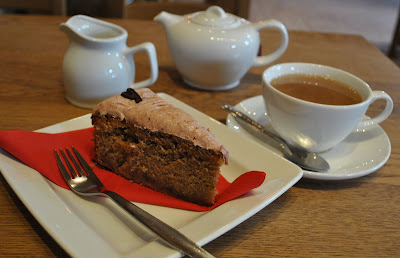 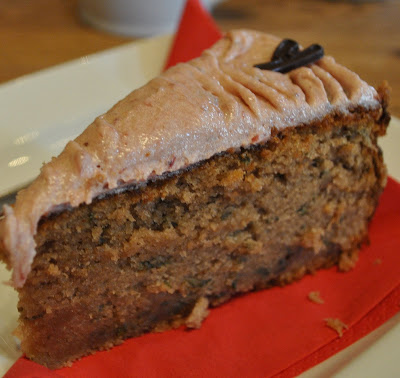 A chocolate, strawberry mint cake. Which actually was quite good. Especially with a reviving pot of tea!
Castles are magical -- whether they are Disney castles or real castles. It was fun to be part of the magic today!
Posted by Martha at 3:03 PM

I love to visit castles. Do you know, Denmark has more castles per sq km than any other country in the world? We've stayed in two of them and I'd love to repeat the experience.

I loved my trip to London when my aunt and I visited there a few years ago. Your pictures are wonderful and remind me of what I liked best about England... the green grasses and the castles!! Lovely posting!
Karen
Ladybug Creek

I thoroughly enjoyed reading about the two castles. Any chance you could get the recipe for that cake??? It looks so yummy.

I am just living vicariously through your blog - keep it coming!
Makes me want to hunt out that clotted cream at our local 'Wealthy Living' and use the strawberry rhubarb jam I just made.
Can't wait for tomorrow...

It was good to see King Henry again. I visited him two years ago there at Warwick....and all his wives, as well as the other figures on display at the time. There was a 6-foot tall woman opera singer in a gorgeous cream gown standing by a grand piano too...I was impressed with her height (being a tall person myself) and wondered how she must have stood out in her day.

Your England posts are very enjoyable and thank you for sharing them with us.

Great post!~ I love tales and also modern day tours of English castles an such; the historical reference to King Henry the Eighth and his ill fated wives is always sad, yet historically interesting also.

What a charming cream tea from lasts week's tea.., I love cream tea and that tea room looks delightfulAlso, with regard to last week's Tuesday tea post:

~ (I was out of the office, after last weeks tea's for several days, so I'm much later getting by to visit than I would have preferred);

..,Yet I must say what pure delight it was to have you partake once again with TTTT and also with my 83rd, 'Tuesday Tea For Two'!..,

Thanks so very much for joining us and we look forward to hopefully having you join us once again in a few days; it's always a pleasure!

I love your blog!

It's been years since I visited Warwick Castle but agree that it was wonderous. Most of the castles around us are 'ruins' which I still like, but to see how people lived 'stately houses' are a better option...like your gatehouse.

Martha, you are now in the shire where I was born!! I am really enjoying all your news from home.

Martha, I'm really enjoying your reports from the English countryside. Your blog is a happy place for me to visit since one of my favorite sites, the General Decorating forum, is currently embroiled in a bunch petty malarkey which makes me very sad. Keep tantalizing us with those delicious looking tea cakes and sandwiches. Yum!!!

This is a wonderful place to visit! I don't believe I have ever been to a castle - what a great experience for you!

I'm so glad you have the same taste in touring that I do. lol I'm really enjoying the trip.
AT

I've been to Warwick, which is amazing, but not to Kenilworth. I envy you for hearing the choir practice at the cathedral. I'm sure it was, well, divine!