Sunday, we went to Hogwarts Dining Hall . . . immortalized in the Harry Potter movies. It wasn't a movie set, but instead was inside this building . . . 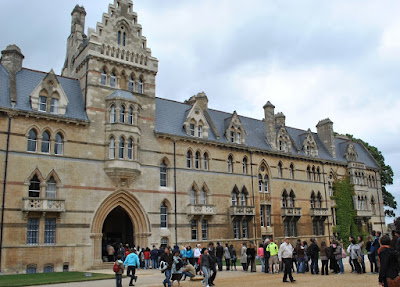 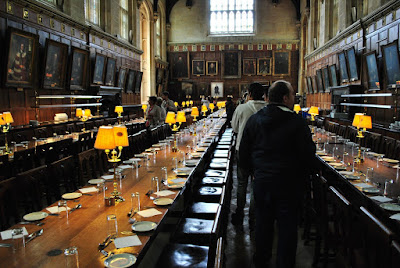 The Hall as it is used for students -- set up for the next meal! Three rows of tables run the length of the room. 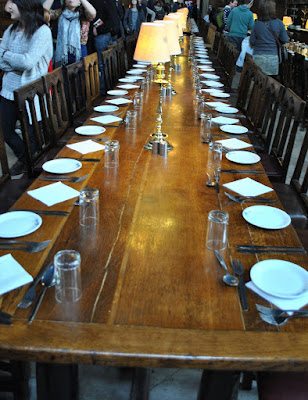 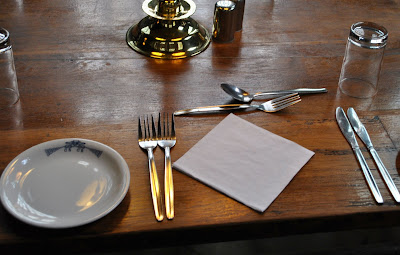 All properly set in English tradition with bread plate, two forks and two knives and the dessert fork and spoon at the top. A glass for beverage and as a concession to modern day -- a paper napkin!
Entrance into the Hall is limited because it is a used dining room. So viewing hours are between meals -- the clean up is done and the places are set once again!
And in the hall before the Hall . . . 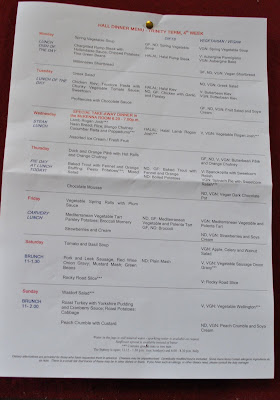 A menu for the week.
Hogwarts isn't the Hall's only claim to fame. Think Alice in Wonderland. Lewis Carroll (also known as Charles Dodgson) held the Christ Church Mathematician Lectureship and while there met the Liddell family whose daughter was Alice. Weaving magical stories to keep Alice entertained, Charles eventually put them in written form and the stories became known as Alice's Adventures in Wonderland.
Christ Church was a big inspiration for Dodgson . Alice's father sat at the High Table in the Hall and each night after dinner he would disappear down some stairs in the back of the hall (thus the rabbit hole) and 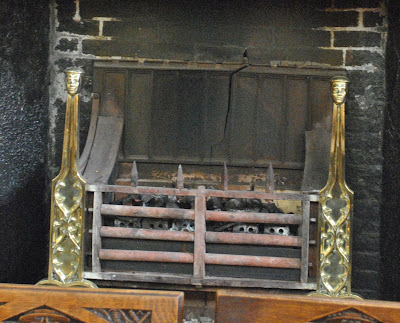 The expanding neck of one of the characters were inspired by these fire dogs with extra long necks! 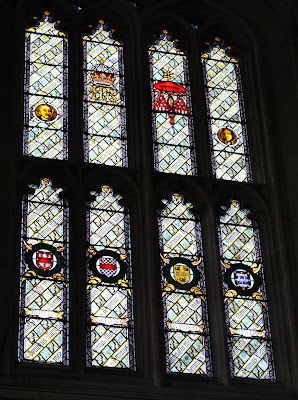 Alice and Dodgson are immortalized in one of the windows in the Hall -- Charles is on the left and Alice on the right. 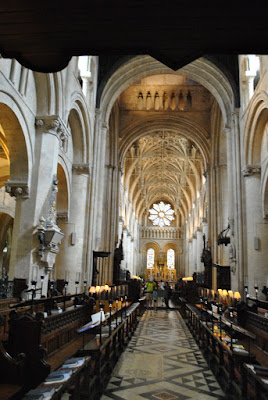 And of course, Christ Church is the only college with a cathedral on campus.
Before we headed to Hogwarts (because we knew we would be too late for lunch) we decided to have lunch at another literary icon in Oxford. 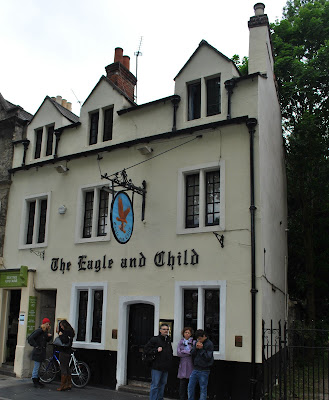 The Eagle and Child Pub (or as locals call it "The Bird and the Baby".
It was where the "Inklings" met regularly.

Inklings included J R R Tolkein and C. S. Lewis among others.
And since it was Sunday . . . we had a Sunday pub lunch 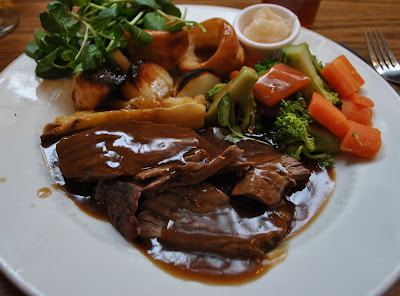 Roast beef for me 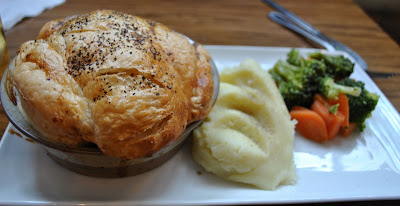 Lamb shank pie for Husband Jim
There is a lot of walking from The Bird and the Baby to Christ Church and around the campus and before we left town, we stopped at a tea room for 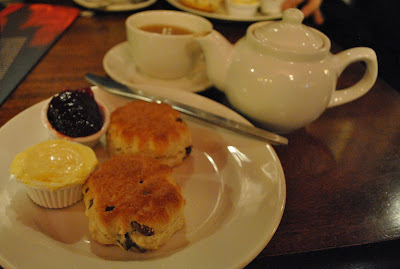 A cream tea. Which will surely fortify you after long long walks!!!
It's Thursday and I'm joining Susan at Between Naps on the Porch for Tablescape Thursday. I can't think of a better tablescape than Hogwarts!!!!
Posted by Martha at 1:18 PM

What a marvelous adventure. When I first began blogging almost a year ago, you were trying to bounce back from an assault to your health. I give praise that you have healed so beautifully that now you are engaged in such a wonderful trip. Loved Thr dining hall. Didn't know that tidbit of information. Cherry Kay

I had no idea that there was a real dining room that was used as Hogwart's dining hall. It sounds like you had another wonderful day in England.
AT

WOW, I'm a Harry potter fan, it's just wonderful opportunity to have some fun! Nice pics !!
I loved!

Cherry Kay-- this trip is my REWARD for having both knees replaced last year. And I must admit that I couldn't have done it before -- with my bad knees -- I must have climbed a million stairs and walked a hundred miles in the month that we've been here!!!

Hi Martha, Oh I am so jealous that you are in England but so happy for you too. I am going to come back and read all the posts from beginning to end and drool over the photos. My dream trip, as I haven't been back since I was born and lived there. Hoping we can go within the next 5 years. I will ask you for pointers.
Enjoy, so great!
Linda

How fun this is. I've read some of the books, but not seen the movies. This is delightful.

What a wonderful pub meal and cream tea - just lovely. I am having fun just watching you enjoy!

I took a look at the students' menu...they sure do eat well! It was fun to see a bit of Oxford through your eyes.

I loved the look into the "Hogwarts" hall and the story of Alice and Lewis Carroll. Thanks for some great pictures.

What a wonderful post!!! Sounds like you are having a wonderful time. I don't think anyone can beat THAT dining room!!!! Thank you so much for sharing your adventure and enjoy your remaining time there!

Your trip is so filled with so many wonderful side trips. How great is it you got to go to go to Hogworts! So perfect. Loved all the information you have shared with us. It's almost like being there with you. Have many more happy days. Safe travels. many blessings, marlis

I love this post! My husband and I are huge Harry Potter fans (and JRR Tolkien as well). Our son is in college now, but he started reading the Harry Potter series in fourth grade. After he'd asked me several times to read them, I started on the first book, and I was hooked. Then I passed it along to my husband, and we were all hooked. When he was in high school, our son decided he had outgrown Harry Potter (much to our chagrin), but Hubby and I still love them. Can't wait for the last movie to come out.

I went to England and Ireland with my husband in 1999, but we had not started reading the Potter series yet. I did love being in England, though. Seeing your pictures really makes me want to go back. Thanks for sharing!

Could you possibly repost The Pugs Bite the Red Knee?