The Summer Solstice, Druids, A Follower and Me

The most famous stones in the world.
When we lived at Pitts Cottage, they were our neighbor for they were a mere 5 miles away. No matter how many times you see them, they are still awesome -- these giant stones of Stonehenge!
More than nine hundred stone rings exist in the British Isles. Of these, Stonehenge is the most well known!
The Brits market attractions differently than we Americans. As you're driving along the roadway, you can see the stones from the car. Rising skyward out of the Salisbury Plain. 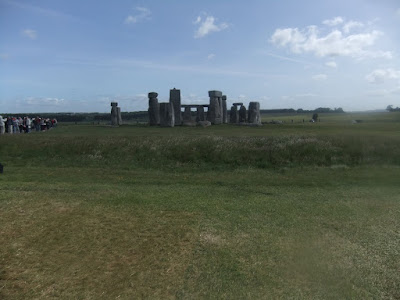 In America, they would be fenced off so that you couldn't see them unless you paid admission to see them. A big tall fence would enclose the stones! But not in Britain!
Some Stonehenge Facts:
Stonehenge was built between 3100 - 1100 BC.
The circle was aligned with the midsummer sunrise, the midwinter sunset and the southerly rising and notherly setting of the moon.
The ground plan and structural engineering of Stonehenge incorporate sophisticated mathematical and geometrical understandings on the part of its builders.
And although the Druids are associated with the stone rings today, they had nothing to do with the construction of Stonehenge. Druids of yore were known to conduct their ritual activities mostly in sacred forest groves not amongst stones on the plain! 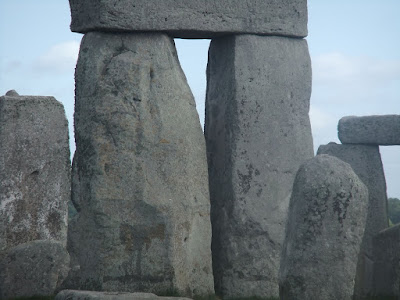 There were two types of stones used in its consruction: the "bluestones" (weighing as much as four tons and brought from 240 miles away) and the Sarsen stones (averaging eighteen feet in height and twenty-five tons in weight)
The construction of Stonehenge required more than thirty million hours of labor! 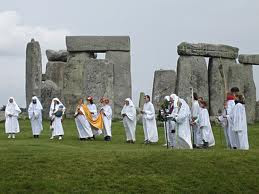 When we were there the end of May, alas, we saw no Druids -- for the rituals they perform at Stonehenge are on the Summer Solstice, the Winter Solstice, and the Spring and Fall Equinox.
Of which, today is the Summer Solstice -- so would assume that there would be a Druid sighting or two if you visited the stones today.
But we did see . . . 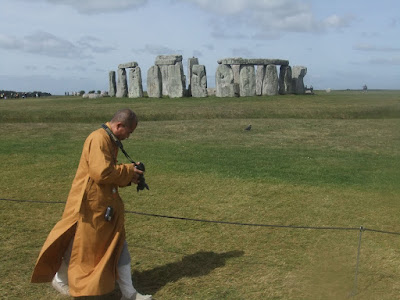 One of the Dalai Lama's followers -- just a regular tourist with camera in hand!
One of those interesting pictures, me thinks!
As for the me: one of our favorite pictures from a 1980's trip we took to England with 12 year old Daughter Sarah, was the three of us standing in front of the stones . . . we updated the picture this trip so that it's a picture of an older (and wiser) Jim and Martha, a grown-up Sarah and new family member, son-in-law Andy.
It's Wednesday and Stonehenge and the Summer Solstice is for Outdoor Wednesday. Please join Susan at A Southern Daydreamer for more Outdoor Wednesday posts!
Posted by Martha at 6:29 PM

This is a site I have always wanted to see; however, I hate to fly. Loved seeing the pics.

One of the BIG to do in my Bucket List!!

I saw a show on our PBS station about these...it is truly fascinating!

The first time I saw them, it was amazing! All I could think was "how on earth did they create this?"

Is Stonehenge not fenced in any more? I saw it in 1997, and it was enclosed by a great big fence and yes, we had to pay admission to see it.

Oh, yes, it is enclosed by a chain link fence -- but in American they would put up a big wooden baracade so that the only way you could see it was to pay to get in.

You can park and walk across the road and look at it through the fence for NO CHARGE. We saw many people do just that!

And there is a rope around it so that you stay a certain distance from the stones. You used to be able to get up really close, but alas, not any more. (All though you still can at the Rollrights and at Amesbury)

Have you ever read Tess of the d'Urbervilles, which has one of the most memorable endings a novel could have, against a backdrop of Stonehenge and Salisbury Plain? I won't say more as would hate to spoil it for anyone who hasn't read it.

We missed seeing this site when we were in England. I regret it.
Joyce M

I wish to see this place in person someday....

I just want to know why you didn't ask me to go with you back in May?!?! I was free! LOL! I bet it was awww worthy. I came by via Susan's party, but I missed it myself. I took pics of my pergola all dressed up this afternoon (with the 2 hour lull in the rain), and I REALLY hope you'll stop by and take a peak, and let me know what you think of the progress! :)
xo,
A

Here's how to get inside the Circle:
http://www.solvingstonehenge.co.uk/page8.html