Beer for Breakfast, Lunch and Dinner . . .

You can have your beer and eat it too!!!! And for breakfast, lunch and dinner! Without being suspected of having a problem and having to go to AA meetings!!!
It rained today -- a good rain and I could almost hear the plants saying "aaahhh"!!! So instead of going out and doing some weeding, I decided to stay indoors and bake. And with a spare bottle of beer in the fridge, some self-rising flour in the pantry, I immediately thought of beer bread! 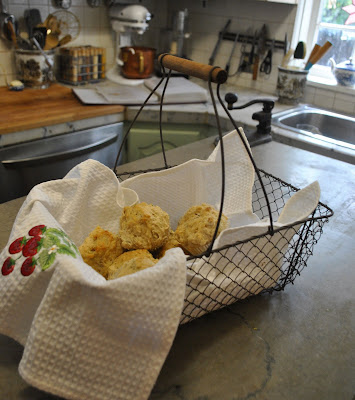 But not in loaf form -- in muffin form. There are, after all, only two of us and in loaf form, we tend to eat the whole thing! At least I can freeze the muffins for later meals and even though we eat more than we should -- like at least one right out of the oven slathered in butter -- enough get put into the freezer for later meals. 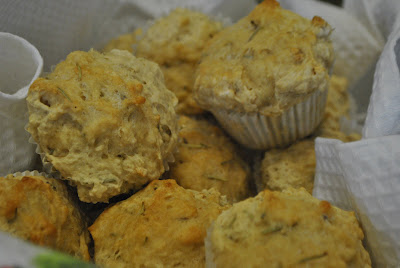 It's such an easy recipe that you can see where the term "quick" bread came from. And they are so good. I added some herbs and garlic and the aroma wafting from the kitchen was heavenly!
It's still hot on the prairie. It did cool down during and right after the rain but then when the sun came out, it turned steamy . . . 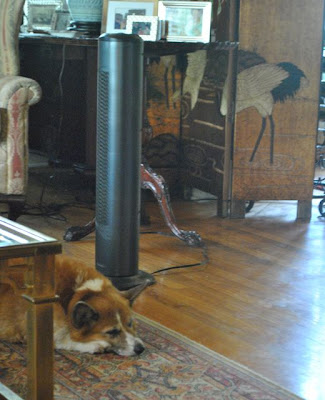 Oliver still finds the best place in the house to be in front of the fan. Oliver is not a dumb dog -- and he does wear a fur coat in the summer. So a dog needs to stay cool!
BEER BREAD
3 cups self rising flour
3 T. sugar
12 oz. beer -- I used a Sam Adams but even a Bud will work
Mix all ingredients together and pour into greased bread pan. (Or you can use muffin tins or mini bread tins (it will take 4 of them)) Bake in a preheated 350 oven -- for 45 minutes. Take out and spread butter over the top and bake for 15 more minutes. Note if you make muffins it takes about 15 minutes, then top with butter and bake 5 more minutes.
I put about a good two tablespoons of fresh rosemary into the batter as well and a good tablespoon of minced garlic.
Posted by Martha at 7:00 PM

Bread looks yummy! hot here, no rain and at night my Heidi parks herself in front of the tower fan in our bedroom.

Martha,
Your bread looks yummy! I purchased lemon poppyseed muffin mix today for a light treat! Just talked to Dad...he told me the rain was refreshing! Lucky you!
Fondly,
Pat

So simple yet so delicious. I've got the beer but no self-rising flour. I'll be putting some on the list because the muffin size is perfect to go with a salad--or, just a cold beer.

I love beer bread! YUM. Thanks for your sweet comment Martha.

I've never made a beer bread, but this looks quick and easy.

LOL! I'll have to tell my husband! Seriously, they look delicious, especially with the rosemary in there. I'm glad you got rain... only wish it had reached up here.

These look appropriately gnarly and the herds you've folded into them guarantee they will be delicious. Beer for breakfast is"a good thing".
Have a fabulous day. Blessings...Mary