How to Keep the Garden Alive

Temperatures on the prairie have been triple digits for most of July. Rain, too, has been almost non-existent. It is the way of the prairie during July and August -- lots of heat and little rain and we're used to it.
And even considering that, we do like to garden but I must admit that even prairie plants tend to wilt when the temperatures have been way too warm and there has been little moisture.
So my morning chore during most of July has been . . . 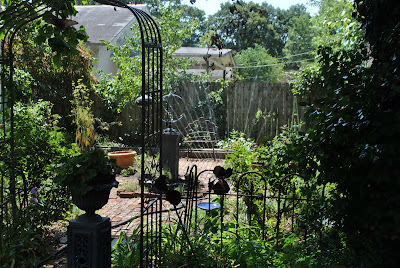 To water the garden -- the method I prefer is a sprinkler . . . it may not be the best but it is an old fashioned way of getting water to thirsty plants. 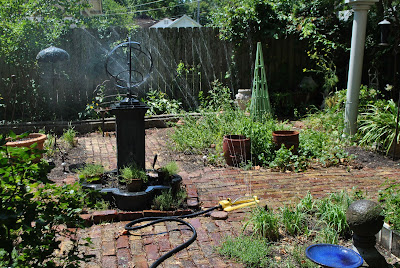 And during the heat wave that we've had the last week or so, we leave the hose and sprinkler in place for we know that we'll have to water tomorrow!!!!
We did get a bit of rain yesterday and we noticed that the lilacs and other plants that we don't normally water looked perkier this morning.
We also noticed that although the plants are not growing at the rapid rate that they did in spring they are surviving and once we get cooler temperatures, I'm sure that they will once again thrive.
We grow herbs and flowers in our garden but we do love fresh vegetables. Tuesday night is Farmer's Market and off I went with my wire basket . . . and came back with it full of good produce including . . . 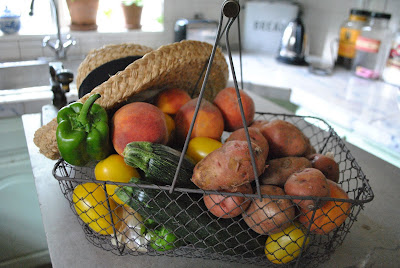 tomatoes, potatoes, zucchini and green peppers, onions and garlic and the best peaches which are so juicy and smell like peaches!!!
We promptly turned the green peppers into . . . 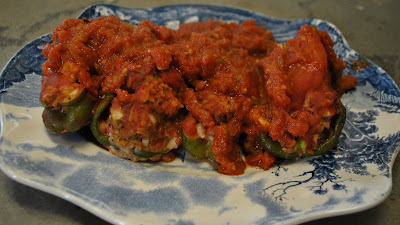 stuffed green peppers. It's a meal for summer and it is the summer fare of our childhood. My recipe is my mother's adaptation of the stuffed peppers served at The Forum Cafeteria in Kansas City -- one of our Sunday After Church Dinner places. And I always thought that they had the best food -- especially the strawberry shortcake which cost 75 cents and I always whined until I was permitted to get it (with the understanding that I would eat all of my dinner before I could even take a bite of shortcake!)
MOTHER'S FORUM'S CAFETERIA STUFFED PEPPERS
Creole Sauce
1 pound ground beef
1 small onion
1/3 c. chopped green pepper
1/2 t. chili powder
1/8 t. salt
16 ounce can whole tomatoes
16 ounce can tomato puree
1 cup cooked rice
6 whole green peppers
Paprika
Prepare Creole Sauce and allow to simmer while preparing stuffed peppers. Mix beef and onion, chopped green pepper. Add chili powder, salt, tomatoes and cooked rice and mix well.
Cut 6 whole green peppers in half lengthwise and remove seeds. Spoon stuffing mixture into each pepper half. Place stuffed peppers in a single layer in large shallow baking dish. Sprinkle with paprika and pour can of tomato puree over and around peppers.
Bake at 350 about 30 minutes until browned and meat and peppers are done. Spoon hot Creole Sauce over peppers and serve.
CREOLE SAUCE
1 large onion
1 t. minced green pepper
1 clove garlic, minced
1/4 t. chili powder
1 can tomatoes
1/2 t. salt
1/8 t. sugar
Mince onion; combine onion, green pepper and garlic in a skillet to which you've added olive oil. Saute over medium-high heat, stirring frequently until vegetables are tender. Add tomatoes and continue to simmer. If it thickens too much, add water. Serve over stuffed peppers.
It's Wednesday and time for Outdoor Wednesday -- please join Susan at A Southern Daydreamer to see what everyone's been doing outside this Wednesday!
Posted by Martha at 7:33 PM

Stuffed peppers are so delicious - I make them often so I am printing out your recipe. I so enjoyed meeting you and getting acquainted!

Send any of your rain our way, Martha! We've been encouraged not to water...and the lawn is looking pitiful. My dad adores stuffed peppers just like yours...I may have to make him a batch when we visit next week. He'd be in heaven~

stuffed peppers.....yum! You have to try the peach pies...when I saw them in Tea Time I could hardly STAND waiting to make them. So easy, so cute! Take some pix if you do and let me know.

Martha,
Your stuffed peppers reminded me of my first taste at my Grandmother Ford's! In later years I made them as a newlywed for my father~in~law. He had seen them in Kansas City at the American Royal, but had never eaten any. I think on that day, I won his heart! Thank yo u for the memories of family, once again!
Fondly,
Pat

I don't know how you are managing with the heat. I don't think I could do it!

Okay. That's it! Stuffed bell peppers were just discussed on the HGTV forum. (You were involved in that too I think.)

So I'm going to get some bell peppers this week and make some. Since DH doesn't like the pepper part...I'll just make a thick patty and cook his stuffing unstuffed. ;-)

Hi Martha,
I think we're getting your rain and everyone else's too!
It's chilly here, not summery at all.
Your stuffed peppers recipe sounds delish, will have to try it soon.
Maggie

Your garden looks happy! We've had to water the plants in pots twice a day even with rain. The weeds, however, thrive on whatever weather comes their way.

Love the basket of fresh fruits and vegetables.

I'm glad the garden has held on during the heatwave. it's good you don't live in a community with water restrictions. I love stuffed peppers. They were a standard feature of my mother's summer table. Thanks for the memory.Have a great day. Blessings...Mary

oh, my goodness, Martha, I had forgotten the Forum Cafateria!!!! My mother and I used to go there when we were down town shopping. Being only 10 when we left KC, it is sometimes hard to remember it there. I remember "The Italian Gardens" Restaurant because there were cousins in my class who were the grandsons of the owner. Wow, memory flood coming on...
I wish I could send you some of our lovely Oregon weather. Delightful 70's here.
Take care

Your stuffed peppers look wonderful! Every other morning I water the garden and all the flowers...it is really a nice routine. Every other afternoon I pick vegetables out of the garden. It's a nice life! Just wish it wasn't so hot! I can imagine how hot it has been on the prairie for you! Have a good rest of the week.

I've spent a lot of time adding extra water to our gardens in addition to the sprinkler system this summer. Our plants are making it, too, but they sure do look miserable. Your stuffed peppers look wonderful. Thank you for sharing your recipe. Cherry Kay