Not Software But Hardware . . .

16 years ago we painted our 1980's oak cabinets. First they were white, then six years ago we decided to paint the bottom cabinets 30's green and the uppers beige. Sometime between then and now we changed the knobs to a brushed silver type knob. But . . . we still had the original bin pulls on the drawers that we put on the cabinet drawers 16 years ago.
We liked them -- thought they had the flavor of a 1920's kitchen but . . . 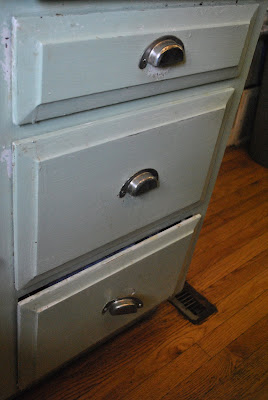 They were showing their age, they were not brushed metal and . . . 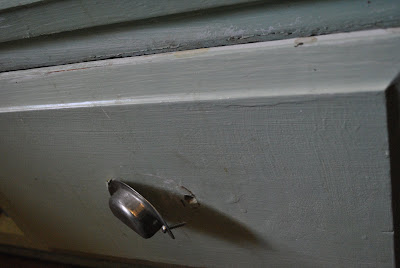 The bottom drawer pull was bent, could not be fastened back into the drawer wood so . . .
I decided that new pulls were needed. I bought some at Home Depot but they screwed in from the front and that was a problem with the old pulls so . . .
I bought another set from Lowes and they were too big -- I discovered that I needed a 3 inch center -- I could not just buy pulls and they would work so . . .
I found some at Restoration Hardware -- they were 3 inch center -- they were a great brushed nickel and they were on sale!!!
They came this week and so . . . 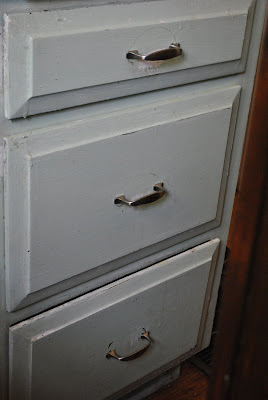 Saturday I put them on the drawers -- and I really like the style -- they have an old fashioned feel and they . . . 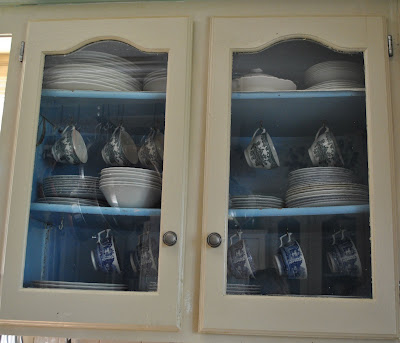 Look really good with the knobs on the cabinet doors.
It's a small change but I like my choice. I can now open the bottom drawer by using the pull rather than having to use the top of the drawer!!!!
It's Monday and it is a small metamorphosis but I'm joining Susan at Between Naps on the Porch for Met Monday. Join her to see all of the transformations this Monday!
Posted by Martha at 3:45 PM

Martha,
The change is a lighter look...nicely done!
Fondly,
Pat

Isn't it funny how one small change can lead to another and then another and before you notice it it all looks different!

Hi Martha, what a frustrating time you had finding those new pulls. The new ones look great! Now I know where to go when I want to replace mine. :)

Knobs and pulls can change the look of a kitchen. I'm glad you persevered and found exactly what you wanted.

Isn't it good to get things sorted the way you want.
Maggie

We went through a similar hardware change in our elderly home a few years back. We were desperate for new kitchen cabinet handles but, alas, the holes for the old ones were just a bit off today's standards. We ended up painting the cabinets and filling in the holes. It was after a long search. I think yours are perfect for Linderhof's kitchen.

You are right they look great. Over the years things have degraded to the point where they don't work quite right and I have let it ride and ride and ride as I don't entertain and it is just me here now. One day I took a look around the room I was in and realized that the place was old and tired with broken stuff everywhere. The furniture is too good to just junk, but the refinishing or real woodworking to repair is hard to get done. So your "little" things here and there add up and inspire me to once again try to spiff a few things up...

How wonderful to find these attractive and quality "pulls" - on sale! From experience, I know they add up in the sense of $$$.

Big or small a metamorphosis is a good thing :)