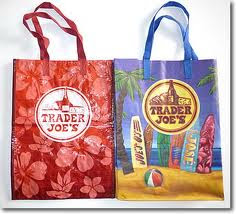 I'm not a "I love to shop at Trader Joe's" sort of girl. I've been to them about three times in different cities but I was very impressed with their selection of products as well as their prices and a little confused as to the small size of their stores. But since they don't have rows and rows and shelves and shelves of the same product (as do most grocery stores) they don't need to be "Superstores"!
To me, they are like an "Upscale Aldi's" and they (both Aldi's and Trader Joes) are both owned by the same people which is why I find many similarities between the two stores.
And last Friday, two of Trader Joe's opened in Kansas City. It made the news -- both print and television -- and there were lines waiting to get in. I purposely stayed away!!!
But today, friend Shirley Ann and I went to the city. I mentioned Trader Joe's (she's never been) and we decided that if we got near one of the two stores that we would stop but that we would not seek them out -- me being fearful that the crowds were still there.
And we managed to drive by the Missouri store and my fears were confirmed -- the crowds were still there!
We did stop and made a quick tour of the store picking up a few items. I'd like to go back in a month or so when it's quieted down and take a bit more time to see what is available.
What I picked up . . . 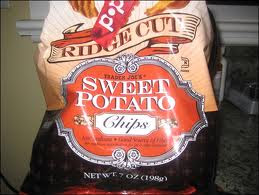 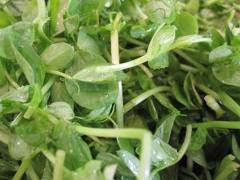 Some pea sprouts -- had never before seen them in a store and there is a recipe that uses them -- hopefully, I can find that recipe tomorow!!! 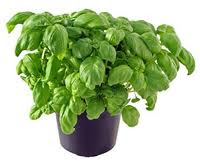 A basil plant -- which reminds me of the one I bought in England. I planted my basil late this year and the weather has turned hot -- it hasn't grown in leaps and bounds as it usually has by this time in July -- sigh -- so this plant shall help supplement by garden pickings. 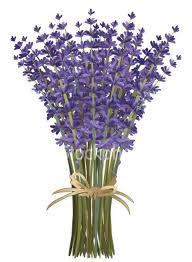 A bouquet of fresh lavender with supple stems. I plan on making little lavender woven baskets to use as favors at a luncheon next Thursday.
It was an interesting experience -- people with carts filled to the brim, all of the cashier stations opened and most people bringing their own carry bags. And so many people that it was hard to maneuver through the store . . . and once arriving at the checkouts, it was a long wait until it was your turn!
I'm sure some of the craziness will be gone once people have their initial "Trader Joe's Fix" -- and then the store will settle into whatever is normal for a Trader Joe's store. That's when I'll be back!
Posted by Martha at 7:30 PM

I would love to shop at Trader Joe's but the nearest one is miles away. They carry many items that aren't available in mainstream grocery stores and their quality is great. I would definitely wait for the crowds to thin out too.

I have never shopped at a traders joes either. But I am with you on the crowds. what is the sense of going when you can't really shop. Like what you got my basil is growning so good so I have been making pesto to freeze for the winter when i am whining about no fresh basil
Cathy

We have three TJ's in Long Beach. I go there quite often! Their orange cranberry scones are to die for! Love the Greek Yogurt too, plain, no fat. Dried fruits....oh, and those amazing frozen mini croissants - 6 to a box, you let them thaw and rise overnight and bake them in the morning....yum! I could go on ;)

PS: I think the croissants are actually 8 to a box. Very flaky and delicious and make the kitchen smell wonderful as they bake.

Sara -- I'll have to add those to my shopping list -- we just took a quick run through today -- didn't have time to look at EVERYTHING!!!! But I'd love to keep a box or two of those croissants in the freezer!

The closest Trader Joe's to us is a 90 minute ferry ride and about 2 hours by car across the border in Everett WA. Whenever I go down there I drop by....and it's right next door to a Tuesday Morning!

Martha, I'm like you. I'm not going til the mayhem ends. So silly.

I think Trader Joe's is the kind of store that entices you to try different things that you'd ordinarily overlook at supermarkets. We have a T.J. very near our favorite Whole Foods so I like to combine shopping at both.

Larry and I are thrilled that they have opened in KC and we don't have to allow time to shop when we go visit the kids in St. Louis! -- Karen

I am so jealous that you have a new TJ's but two???? REALLY jealous.

hi Martha!
When we moved to NH that was one of the first things I checked... how close was the closest TJ's! Mine is about 30 minutes away. It is one of the small, older ones and I would love to have it closer to me. I think you hit on their popularity- they chose the best and don't have a million choices for you to go through at the store. (I HATE walking through a mega store for one gallon of milk;) Two of my favoirtes: frozen basil/cilantro cubes- fabulous for soups and beans. And Sweet relish with real sugar. It's the only place I can find it around here.
Hope you are staying cool!
happy summer,
joan

I'm a huge fan of Joe's. I have been shopping there for years. I don't know how I could get by without some of their items. I love their dairy products. The flowers and plants are always fresh. Their cheese selections are outstanding. And more than anything else I love TJ's Irish Breakfast Tea. I think their prices are comparable to the other larger supermarkets in the area.
I'm glad you now have access. I know you are going to love it.

I was at Ward Parkway at 8:20 on the first day was in line to pay 55minutes. Yesterday was better only 15 minutes. But i live so close i can just run in....thanks for sharing..Pat H

I don't get to go often like some of the people I work with do BUT, love their wine selection and such great prices. And I like the vintage look of some of their boxes!

It is one of our favorite places too.

I finally...am near a TJ's and go a few times a month! Two things I love: their olive oil is very good...and their mango shaving cream! yes, great smelling and smooth shaving cream in an orange upright tube! You never know, right?