The table in front of the bookcases in the living room is known as The Williamsburg Table -- it was made by The Kittinger Company under the auspices of Colonial Williamsburg. I'm not sure when but it is marked and it's a wonderful table. Solid mahogany, it has the birdcage mechanism that allows it to turn -- for in Colonial times, you would pour the tea and then turn the table so that your guest could pick it up!!!! It also has the "piecrust" edge and wonderful carved base and feet.
It was a Craig's list find in the city and I felt lucky to have found it especially at that price!!!
It was originally bought to serve as a tea table between the wing chairs in the living room. Folded so that the table was flat and against the wall so that it could be whisked out and used whenever needed -- without moving lamps and "things" off the top.
However . . . to have a table and not to be able to put things on it . . . . well, eventually, it was put to use as a table -- with just a lamp and another "thing" on it . . . and then . . . 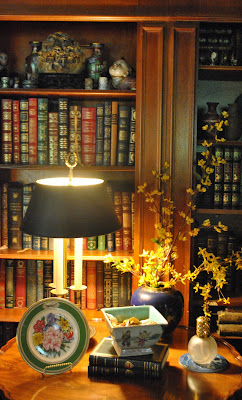 It's a full blown tabletop!!!! With lamp still in place, a cloisonne ginger jar filled with forsythia, a plate, an Asian bowl on a couple of books and one of my Lamp Bergers. 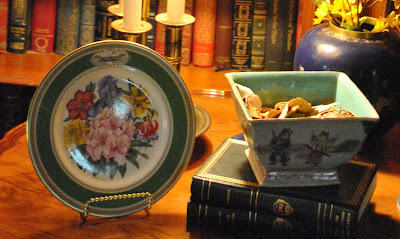 The plate is not any plate -- but a gift from Daughter Sarah to commemorate our trip to the Chelsea Flower Show in May -- it's a 1981 souvenir plate from the show. What a thoughtful gift -- arriving at Linderhof just because she thought I might like it!
The bowl is a great Asian piece that I fill with potpourri -- rose in summer, orange and cinnamon and spice in winter months.
It's Tuesday and I'm joining Marty at A Stroll Thru Life for Tabletop Tuesday. It's always fun to visit with Marty and everyone else who has such pretty tabletops!
Posted by Martha at 5:08 PM

I love everything from the Williamsburg collection. Do you know, we lived for three years in a house designed and built by one of the original way-back-when architects of the Williamsburg reconstruction. I loved it - if I can ever find the old photos I'll blog about it.

The table is definitely a treasure. Such a stunning piece and you have created the perfect vignette on it. I love the lamp and the beautiful plate. Such a lovely setting in front of the bookcases. Thanks so much for joining TTT Hugs, Marty

It's wonderful! I love the table and your display looks great. I also love your book collection and I'm seriously coveting your book shelves.
AT

Hi Martha! Oh, what a lovely table and many pretty things on it! Just lovely.
Be a sweetie,
Shelia ;)

Martha,
Exquisite table!!! Your vignettes are lovely, always! I enlarged your photo so I could get a better look at the ruffled edge! Took my breath away! Great find!
Fondly,
Pat

Your home is so gracious and beautiful. And...I love those books on the shelves....what amazing covers they all have. Are you a collector of old books? They really knew how to make an attractive book in those days!

When we were newlyweds, we lived very near Williamsburg and went several times a month--to have lunch at Chowning's and then read the newspaper or a book under a tree. We often wandered into the furniture shop near the Inn and picked out all the pieces we'd buy when we had a house. Your table was one of those pieces. Such fun to dream!

Thanks for your help once again. I'm ordering the cb you recommended.

The plate Sarah gave you is sooooooo beautiful and so very thoughtful. Every time you look at that plate you will think of that cherished memory of the two of you attending the Chelsea Flower Show together. Loved this post but I HAVE to ask you this, do you have forsythia blooming right now?????

Love your vignette on your beautiful table~ and what lovely plate from your daughter!