Orchids For All and All for Orchids

Missouri friend Katherine and her garden friends made arrangements to visit the "orchid cave" in the city and invited we Kansans to join them.

The business in the cave is Bird's Botanicals and . . . 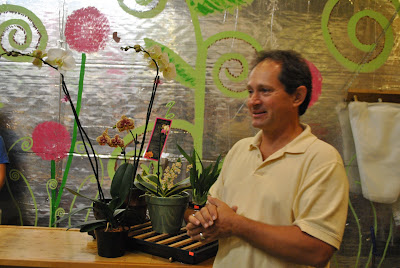 We got to not only meet David Bird but also got a private tour of the caves and some excellent tips on growing orchids and getting them to rebloom. He wants his orchids to live and thrive -- unlike the ones you get at Home Depot or Costco (they're hoping to see replacements purchased -- not additions as David does) 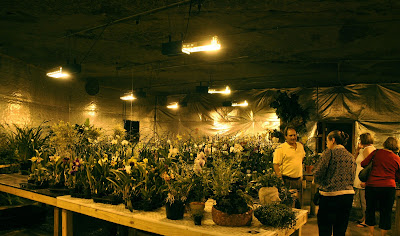 And the orchid rooms . . . not a window in sight and the temperature is the same summer and winter! The triple digit temperatures of this summer did not affect his business as it would have had he grown his plants in a regular glass greenhouse. 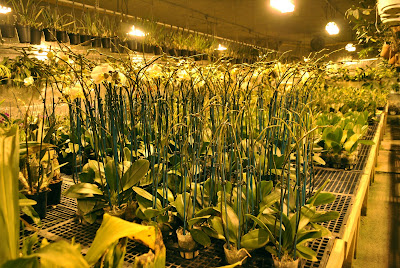 One of his specialties and the biggest seller -- white moth orchids. These are being readied for the opening of the new Kauffman Performing Arts Center next month. 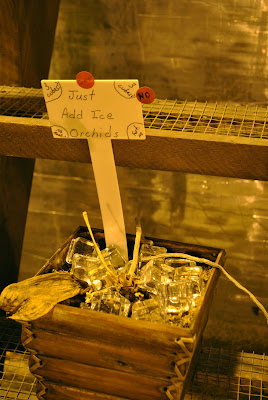 I guess a "new method" of orchid watering involves putting ice cubes on the plant so that they slowly melt and "water" the plant as they do.

David said that the worst thing you can do to an orchid is to put ice on it's roots! But Lowe's and Home Depot want to sell more orchids and so encourage this watering method.

I had just recently heard of it. A friend waters hers with this method. I've not talked to her about what David said but I certainly will next time I see her. Who, in my opinion, would be right on the best way to water orchids -- a clerk at a Big Box Home Improvement Store or a gentlemen who grows and owns thousands of orchids?

And the orchids themselves . . . 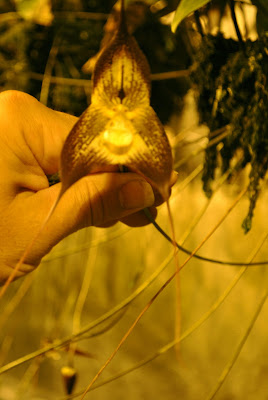 A Dracula orchid -- very rare and very hard to grow. He does sell them but they do require special attention. 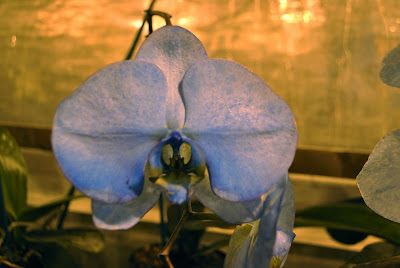 A blue moth orchid. Easiest of all to grow but this blue color was fascinating to me and it wasn't "dyed" (as so many cut flowers are) but was a natural color. 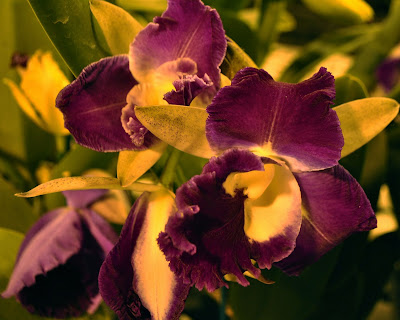 A corsage orchid -- the large variety. 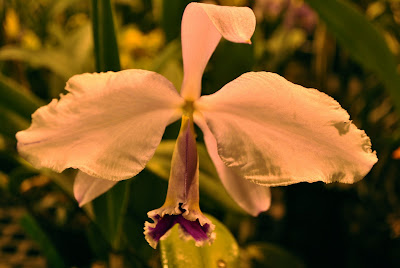 The name misplaced but I love the shape of this orchid. 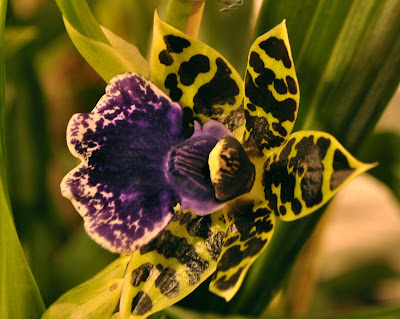 Another unknown variety but I loved the color.

(I didn't take as many notes as I did pictures!) 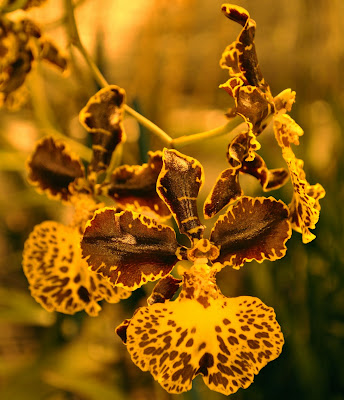 A chocolate orchid -- the last one he had (and it was for sale) and it's called chocolate because that is what it smelled like! 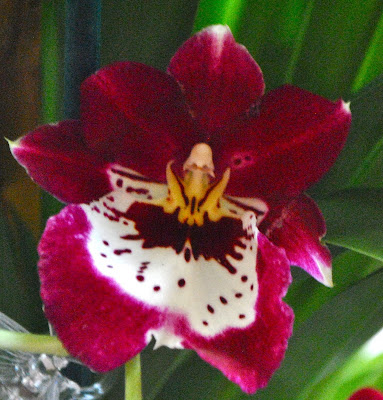 The pansy orchid. So named because of the sweet pansy face!

When David asked, after the tour, if we had any questions, we all said almost in unison "What can we buy?" And so, home with almost everyone came an orchid. As well as some of the orchid food that he recommends.

And after the tour, we all caravanned to EBT Restaurant for lunch. I've wanted to go "forever" and have never been. But I certainly will be back! 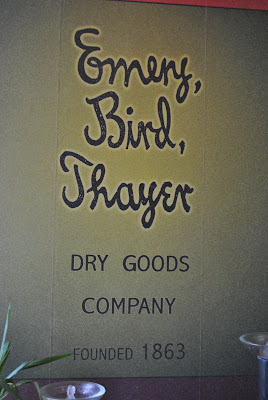 EBT stands for "Emery Bird Thayer" -- a longtime and beloved department store in downtown Kansas City that was closed in the late 60's and the building (which was on the National Register) was torn down in the early 70's.

Many of my childhood clothes as well as my career girl clothes came from Emery Bird's.

But at least some of Emery Bird's lives on at the restaurant . . . 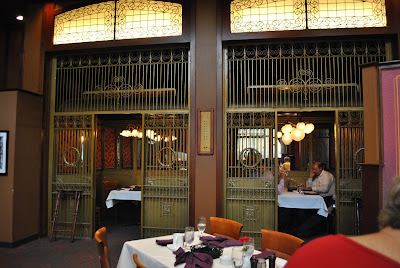 The elevator doors now open onto private dining rooms -- I've walked through those same doors many times. And there was always an elevator operator to take you to the proper floor! 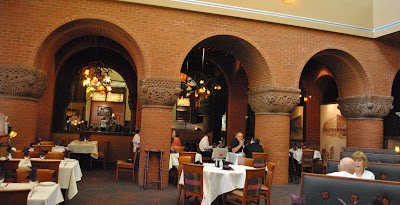 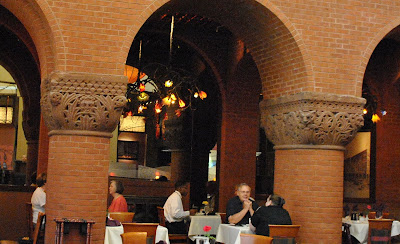 The bricks are new but the plasterwork dates from the 1890's when the building was built. 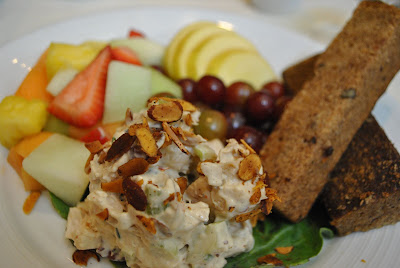 Reminiscent of the luncheons I enjoyed in the Emery Bird Thayer Tea Room -- chicken salad, fruit and banana bread.

It was a stellar luncheon!

And what orchid did I bring home? 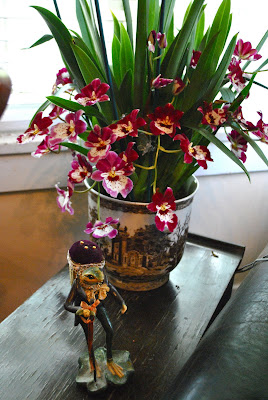 A pansy. A bonus -- the fragrance which is amazing. Not only does it scent the sunroom but whenever we are gone and come back home, the whole house smells like the orchid!!!! It's on an end table in the sunroom. In front of a north window.

It's a great souvenir of a fun day filled with friends.

It's Tuesday and time for Tabletop Tuesday with Marty at A Stroll Thru Life. Please see what everyone has on their tabletops this Tuesday -- I can't imagine that anyone has anything as fragrant as my orchid on a tabletop!!!!

You had the perfect day! I loved the old department store tea rooms. It was a special treat with my mother, sisters and grandmother. And I love the orchid that you brought home. I hope it performs for you for many years to come.

Beautiful post! Love those flower shots.
Hope to see you on my blog:)

What an exquisite orchid! And some orchids have the most wonderful fragrance. I think you chose perfectly. And what a great restaurant. I miss the big downtown department stores of my childhood, and the restaurants I went to there, most often with my grandmother, but with my mother, too. Lovely memories.

LOoks and sounds like a most wonderful and memory filled day!! The orchids are gorgeous ... Happy Tuesday...HHL

So beautiful and interesting. I love orchids.

The orchid house reminds me of our honeymoon. We stayed with friends of my Aunt's who grew orchids for the Royal houses as well as running a guest house.

I must say that orchid is really lovely!