But change it does. And it's a thought out change -- sometimes sketching the idea on paper before I move the items to the tabletop. 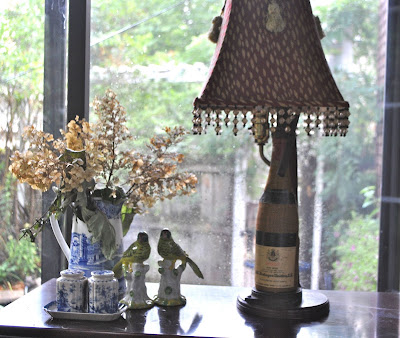 Became this vignette. Nothing was planned. The lamp has always been there -- it's a real wine bottle -- the vintage was the year we were married. The rest of the lamp is a wine opener!

The blue and white salt and pepper shaker were a gift from dear friend Pat. I had a luncheon and after, I put them on the table instead of putting them in their proper place. Shame on me!

And Friday's luncheon included the birds as part of the centerpiece. After the luncheon, I put them on the little table when I took off the luncheon tablecloth and put the breakfast room back to rights.

And there it all stayed all day Saturday and then Sunday I looked at the table and thought "what a neat vignette"! I like it and it was so totally unplanned. A vignette made out of laziness actually for instead of putting things away, I used the table as a landing zone!

Sometimes, it does pay to be impromptu and spur of the moment for it's a good vignette. How long will it stay -- I'm not sure. But for August at least, it will remain.

I'm joining Marty at A Stroll Thru Life for Tabletop Tuesday. See what other great tabletops there are this Tuesday.

I'm changing furniture for the first time in a long time. Its a big deal to move the heavy pieces so like you I just change the tabletops, a lot! I usually change with the seasons. I love your unplanned vignette, its lovely. I love the Spode blue pitcher, my favorite. I love hydrangeas too and they make wonderful arrangement all year long.
Thanks for sharing.

Looks very lovely here with the light coming in!

Martha,
Lovley impromptu vignette!!! I adore the lamp and its special meaning to you and husband Jim! I spied the salt and pepper shakers, so glad you are enjoying them, dear friend! Lovely August vignette.
Fondly,
Pat

You and I obviously attended the same school of design! LOL. I have friends who move their furniture all the time, so I come home and stand and look at my room...and then I think....Nope, I really like it just the way it is. If I started moving things, I think that I would end up putting it all back in the exact same spot. Your impromptu vignette is perfect against the window. The pair of birds look like they've just dropped in from the garden. Hope that you'll consider finding a new friend and participating in our Tables for Two Party this fall! Cherry Kay

Rarely is anything ever planned around here, just a whim, and then all of a sudden I have a huge mess and have to do something. Your vignette is lovely. You have some of the loveliest blue accessories. Love hydrangeas. Thanks so much for joining TTT. Hugs, Marty

I just adore the idea of your lamp...that is so unusual and with the wedding year...I like that!

Ugh -- I am on my laptop which I hate so if I spell things wrong or post a half finished comment ... you willknow why!

I can't let Howard see this post; I love to move furniture around. I'd have everything on wheels if I could! I'd also repaint the walls in most rooms every year or so.

LOVE the wine bottle lamp -- did you make it or find it? How charming that it's your anniversary year vintage!

I didn't have many hydrangea blooms this year, but I have a few of them drying. Better that than none!
Cass

So beautiful and tasteful, Martha! And definitely making for a bit of envy from those of us who are aesthetically challenged...

I love the lamp. It is so unique. I wish I could move furniture but my space doesn't allow it. So I move stuff around a lot to make it look fresh.