I'm sad that this is the last Tea in the Garden Saturday . . . it's been a fun summer and although not as many teas as I would have liked were in the garden (it's hard to have a tea party outside when it's triple digits as it was so much of this summer on the prairie).

But cooler weather has arrived (although next week it is supposed to be hotter -- but it is Kansas!) and it is glorious to be outside once again.

It's been so much fun this summer to join Bernideen for her Saturday party.    Her post this week is terrific for it is a recap of all of her wonderful garden teas!!!

Friend Sally kindly watered some of my plants while we were in Minnesota and turnabout is fair play!
She called and wondered if I would "babysit"!

I fixed us an icy glass of Earl Grey tea and brought out a plate of Mother's cheese biscuits.    Husband Jim was going to a function and needed a savory treat (and they could spare a few) and besides, I also had baked enough to send Sally and Husband Bob off  with a bag of their own.

It was really pleasant out and so I brought the tea and treats to the porch.    Sally's going to England (lucky duck) and we went over her itinerary and talked about those places she was going that we had been in the Spring!


Tea and treats -- the treats on blue and white Spode, of course!!!!


Mother made these often -- they were good before dinner nibbles with drinks or with glasses of tea for a bridge luncheon.    They are supposed to have pecans but alas, someone (it was either Husband Jim or Oliver) ate most of the pecans in the freezer -- I had enough for Sally's treats but not enough for the whole batch.     They really are better with pecans! 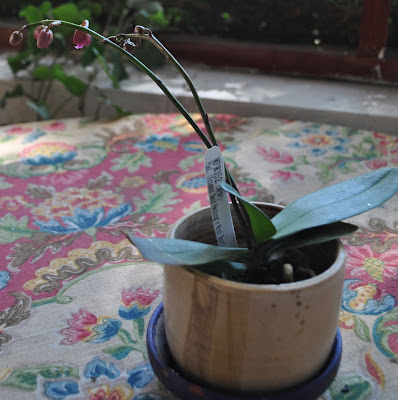 Sally's wee orchid that she got when we went to Bird's Botanicals in August.    It's a daunting responsibility -- she'll be gone 10 days after all!!!!       It's full of buds and I'm hoping that it does bloom before I have to give it back.    I'm anxious to see how big the blooms will be.    I'm assuming that they will be a magenta . . . we'll see.

The cheese biscuits are an old recipe.    My mother never really did cheese straws but she did make these "biscuits" (think English cookie biscuit rather than Southern biscuit).       But these biscuits and the cheese straws are cousins for both are just flour and butter and cheese.    But these are rolled into balls and a pecan placed on top.    So they're really a savory cookie.     I've not made them in a long time.   It's one of those recipes that I sort of forgot about! 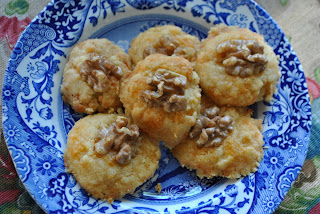 Sally and I enjoyed our plateful . . . Sally said that she and Bob would enjoy their sackful . . . and Husband Jim said his group enjoyed their big plateful.     So much so that he came home with an empty plate!!!


MOTHER'S CHEESE BISCUITS
1 cup butter (2 sticks) at room temperature
8 ounces extra sharp cheddar cheese, finely grated and brought to room temperature
1/4 t. salt
Big dash of cayenne pepper
2 c. flour
pecan halves
Preheat the oven to 350.    In a large mixing bowl, combine the butter, cheese, salt and cayenne and mix with your hands until well blended.    Add the flour gradually and mix with your hands until firm and smooth, adding a little more flour if necessary.
Roll the pieces of dough in the palms of your hands into balls the size of large marbles and place on ungreased baking sheets about 1 inch apart.    Press a pecan half in the center of each and bake till slightly browned but still fairly soft, about 20 minutes.
Posted by Martha at 4:33 PM

Martha,
Had we had Skype...you'd have been shocked seeing my reaction to Cheese Biscuits. . .I couldn't imagine why you had put nuts on them! I have Southern influence in my roots and I was thinking BIG, PERFECTLY ROUND, TALL, FLAKY...well, you get the picture. After reading your explanation...I'm thinking those would be a perfect treat with tea after working @ the Clinic!!! Thanks for sharing this delightful recipe....and I'm so glad you DIDN'T see my inital reaction!
Fondly,
Pat

What a treat, and so simple to make. I will definitely be trying the Cheese Biscuits!!

I hope you get to see the orchid bloom. I've always wanted one, my husband had one at his office that his secretary mothered. When she left for another job, I tried, but killed it!! So...I admire anyone that can grow a healthy one! ;-D

Boy, Sally has the advantage of someone who's been there giving helpful "where to" tips! Your pecan story makes me remember at my house when I run out of peanuts and see the little squirrels waiting at the door I steal my hubbys pecans. He doesn't like that! Another great recipe here and yes I am printing!

Oh yum to the biscuits -- they look divine, and cheddar is one of my favorite foods!

The orchid will be fine as long as you don't water it more than ONCE while it's in your care. Too much water is about all that can kill an orchid like that.

I have a recipe for a cheese biscuit that takes a pot of English cheese - sooooo good. I am definitely going to make your mother's biscuits though, because they look so good.
I get fooled every time, on hearing 'tea' and thinking 'hot' to see a glass or two of iced tea. It reminded me of my shock, when we lived in Oklahoma, when I ordered tea and was served a tall glass full of amber liquid and ice cubes. I learned quickly!

Hi Martha,
Your biscuits would be a treat for sure. I love cheese! I hope you get to see the orchid bloom before it has to go back to its home. Have a lovely weekend.

Your cheese biscuits look delicious and will be a nice selection to serve at my next tea.
I know the feeling of going to the freezer to get the pecans - in my case it was a huge bag of walnuts, only to find that DH has been snacking (heavily) on them.
Judith

Thanks for posting this recipe! Can't wait to make some! Have a great day!
Lottie

Hi Martha,
this was a wonderful tea time with savory treats. The cheese biscuits sound really yumma. I enjoyed the whole story. What a luck to have a friend, who babysit the plants. And so funny that your husband ate the pecans, can understand that because pecans are truly delicious. Thank your for this delightful tea time.
Best greetings, Johanna