I am working on genealogy -- trying to find my roots.    I'm not dedicated.   I hit a roadblock and then I put it down for a while.    So it's been a slow process.     I rediscovered Cousin Janet a few years ago and she promised that Cousin Lena had genealogical information and that when she found it . . .

She found it and I headed north and hopefully, Cousin Lena had a treasure trove of family history!

But Janet also said that she had a surprise for me . . . besides the information . . .

And what a surprise it was!!!! 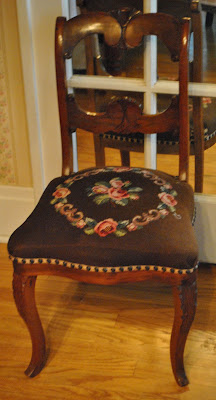 Two sweet old chairs -- I'm not sure of their age but it appears that the back is handcarved and there is also carving on the legs. 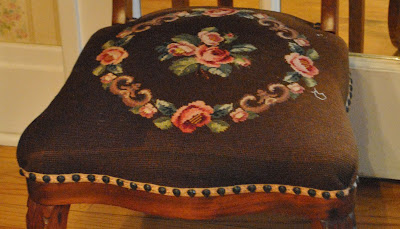 The seats are covered in needlepoint -- and I can't think of a better seat covering than needlepoint and I adore the pink roses which are perfect for our bedroom. 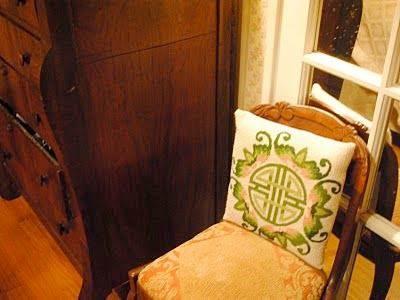 Cousin Grace's Chairs -- or at least two of them that were in our bedroom. 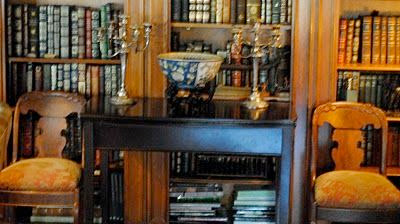 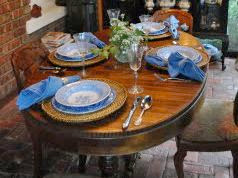 The breakfast room where they replaced

The Duncan Phyfe  Chairs that we painted black a few years ago.     I like the wooden chairs with the table in the breakfast room because the sideboard is painted black and it's a better contrast I think.

It's Monday and I'm joining Susan at Between Naps on the Porch for Met Monday.    It was fun to play "musical chairs" this week when I brought my gift home!!!!

Martha,
Musical chairs, indeed! Those are so delicately beautiful. I adore all the handiwork of past generations craftsmen!Finding your roots must be quite interesting...good luck on your quest!
Fondly,
Pat

First of all, your new to you chairs are absolutely gorgeous. Do you think a family member did the needlepoint seats? The needlepoint is just gorgeous and as you know I dearly love needlepoint and do a lot of needlepoint myself. I have dabbled in family history as well and have learned something that you may already know, the Morman Church in Salt Lake City, they have a website that is a wealth of information, ancestry.com. They have info on every family in this country. I know you must have seen the advertisement on the TV, welllllllll, it is true. Check it out if you haven't already.

Martha, you have the loveliest home! Your new chairs are a perfect fit. Congratulations on a great acquisition.

Hi Martha - I like your sort of Musical Chairs. Isn't it funny how one things leads to another, just like dominoes.

Hi Martha,
Wow, what special chairs! I love the needlepoint. I wouldn't let anyone sit on them, I would say you my look but don't sit LOL
My Mom, Dad,Sister and niece are the ones in my family that have worked on our genealogy.
Its wonderful you and your cousins are working together to trace your family tree.
Have a sweet day, Elizabeth