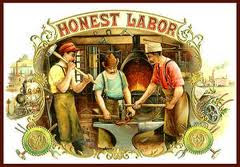 It's Labor Day
It is . . .
The symbolic end of summer
The day before school starts
The last day to wear white shoes
The beginning of football season -- both college and pro
A Federal holiday

It's interesting to note that Labor Day has been a National Holiday since 1894!!!    At first Labor Day was celebrated with street parades to exhibit to the public the strength and esprit de corps of the trade and labor organizations followed by a festival for the workers and their families.    In later years, Labor Day was a good day for politicians to campaign for people were gathered for the parades and festivals.

Politicians still campaign on Labor Day but parades are farer and fewer than they were in earlier years.
Americans, it seems, now use not just the day but the weekend for camping and family get togethers.   Often barbecues are fired up and an assortment of foods are charcoaled.

We wear our white shoes to church for the last time on the Sunday before Labor Day and put them in a box on the shelf in the closet.

Unlike when we were children, school in our little town started in mid August so Labor Day is just a holiday now to the school children rather than the end of summer and the start of the school year!

Husband Jim and Sarah's Andy are looking forward to the football season.     Jim is a Chief's fan while Andy has many teams -- the Minnesota Vikings, the Chief's, K-State's Wildcats and Minnesota's Gophers.    He takes his football seriously.       To me, football is the perfect background for a Sunday afternoon nap!!!

We light up the grill for Labor Day -- it's not the last barbecue of the season for warm September days are perfect for  barbecues and we have even been know to smoke a brisket or a rack or two of ribs in the snow!!!!


Husband Jim does what I think of as the perfect hamburger . . .


Our go-withs vary but we love the Colorado Olathe corn grilled along with the meat, or grandmother's coleslaw, our favorite potato salad or a new recipe if I've found something that looks interesting.    Icy bottles of beer is the perfect beverage.

Great post. I didn't know we have had Labor Day that long. It's a time for us to really enjoy the BBQ also. This year we are having burgers, nice and juicy and with a great slice of vine ripe tomato, swiss cheese and vadilla onion. Couldn't be better. Add some macaroni salad and I am a happy camper. Not crazy about beer, but a chocolate shake makes it perfect to me. Have a super day. I love football too, so I am glued to the TV. Hugs, Marty

Happy Labor Day weekend. Ours varies from year to year. Our high school has it's reunions Labor Day weekend so sometimes, we're there. Often, we see family as we did yesterday. Today, just us enjoying the cooler weather. Tomorrow some gardening!

Enjoyed reading your Labor Day post! My hubby just loves BBQ. We've been eating alot of turkey burgers this summer, trying to eat a bit healthier and they are actually pretty good! Your blue cheese crumble hamburger looks YUMMY! Hope your holiday weekend has been wonderful :)