This was originally posted on April 21, 2009.    I had finally gotten the shelves built and things arranged in the "shed".     Believe it or not, it is still as organized then as it is now.    The only time it isn't is in winter, when I use most of the floor space to store winter fragile pots and statues (including my asparagus jars) -- but then I don't do a lot of gardening in winter anyway!!!


It's Sunday and I'm joining Chari at Happy To Design for Favorites Sunday.


There are flowers at Linderhof as well -- pansies, the last of the tulips, and primroses. However, instead of flowers, I want to share my fairy tale potting shed. 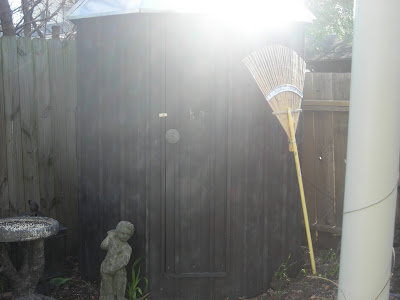 It's small -- six feet at it's widest points but it does have eight sides and a pointy roof also with eight sides and the sun is shining on that bright sheet metal roof causing a glare. We're hoping to take that roof and make it looked like aged copper.

It started out life as a deer blind and I got it for a bargain. But alas, it had no door (for it was to be entered from the trap door in the bottom) but one was made for me and as a bit of whimsy, I used an old watering pot rose as a door handle. 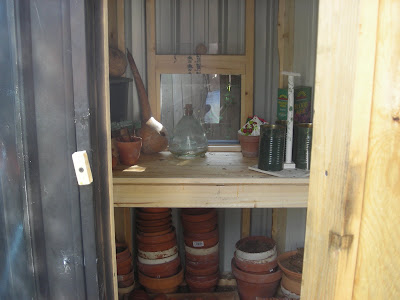 I had a shelf built across the back last week and so, organization of the potting shed took place. All of the pots were placed under the shelf. 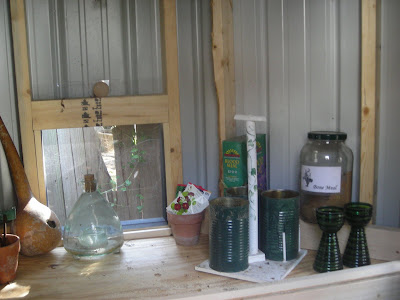 And on top -- my jar of bone meal, my homemade flower carrier which comes in handy when you pick flowers in the garden -- fill the green cans with water and then put the flowers in them so they stay fresh, a pot of seeds waiting to be planted, my two newest forcing vases. 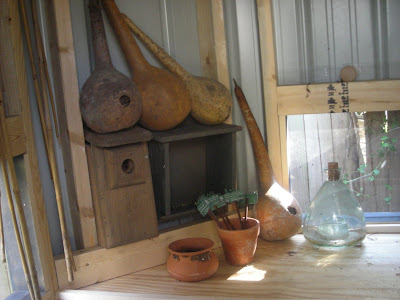 The other side has bird houses which will be placed in the garden soon. As well as a little pot of plant markers for the herb garden. The glass jar is a wasp catcher.

It may be small but it does hold a lot and everything has it's hook so that garden tools can be organized. A copper bucket near the door holds sand and oil and into this I stick my hand tools. I can open the door and grab what I need and it's easy to return to it's proper place when I'm ready.

Although I've not had the potting shed very long, I really can't imagine the garden without one.
Posted by Martha at 5:41 PM

Good to bring in those herb markers as I left mine out all winter and I can hardly read them! Looking very organized here! Organized is a good thing!

You put me to shame with your well-organized potting shed!

That is a very well organized shed. We really need to get ourselves a garden shed. We put all our garden tools, pots, canning equipment, etc in the crawl space each winter. Not very convenient.
AT

Have a Daily Cup of Mrs. Olson said...

I love your little potting shed! Everything in it's place. It's so neat and tidy. I have a potting bench in a small area which I use alot. Still, a shed would be wonderful! Plan on building a little out building next year. Think It will have to be a playhouse. I promised the grandies. Had one at our other home and they miss it. Like you, I stored garden items in it during the winter.

Just came by via Chari's to say hi.

That was a great repurposing of a deer blind. I had a potting shed at my last three homes but not here in the desert. I posted about one of them recently.

I hop you are enjoying your long weekend.

ps. I have a party on Wednesdays that you are welcome to join ;)

My friend, you have such a nice potting shed! I would love to have one...maybe some day! Thanks so much for joining in with the Sunday Favorites party this week...a pleasure having you!

Hope you're having a wonderful Labor Day holiday!
Chari @Happy To Design