Treats for the Committee Meeting 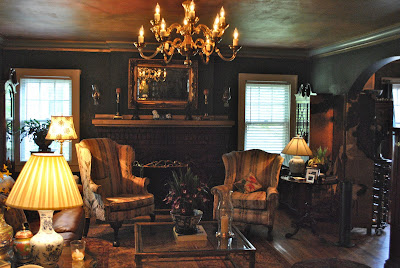 I belong to several committees -- most of which are hosted in homes -- and so I take my turn.     I make sure the house is tidy, the floors vacuumed and the furniture dusted.      And even though our purpose is a meeting, having a little nibble is always appropriate.

And it is easy to set up for this committee -- a big pitcher of icy minted tea and some glasses for if anyone imbibes, they bring their own and all your provide is the glasses!!!!

My nibbles of choice: 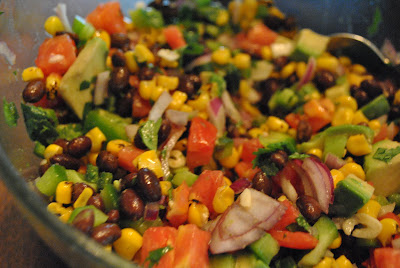 Betsy's Roasted Corn and Black Bean Dip which I've had for a long time.    Betsy is a friend and poster on a food board -- actually the first internet board I ever found -- and this was a very very popular recipe -- so popular in fact that it has six pages of comments (all great) about the recipe! 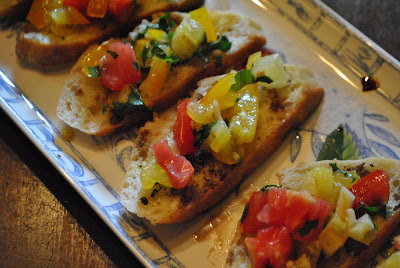 And bruschetta with fresh Farmer's Market tomatoes, garlic and my garden basil.     Summer doesn't get any better than this!

And when we went to the city the day before, I brought home these: 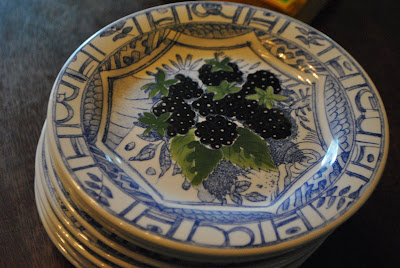 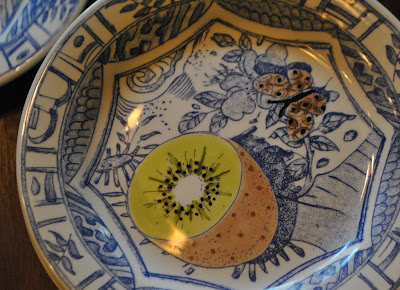 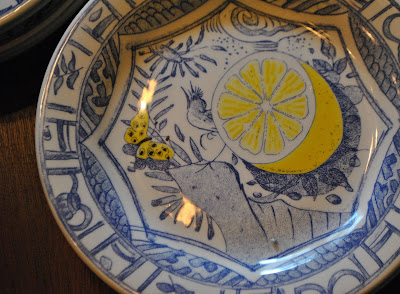 A couple of years ago Tuesday Morning had a 50% sale off clearance and when I was down in Joplin, I bought the big round plate and the sandwich plate.

At other Tuesday's I had seen both dinner plates and these cake plates.

And then I was at a Tuesday Morning who was still having the 50% off clearance sale items and they had eight of the cake plates.  (reduced at that time to $8)   I bought them . . . . but then in a moment of sanity (or insanity) decided that I didn't need them and so on the way to Texas for a cruise I took them back!!!!!


A decision I always regretted after I returned home.

But, alas, there were no more of the plates left -- I looked -- 50% clearance made them a good buy and they flew off the shelves.

But on the Monday before the committee meeting, we went to a Tuesday Morning (for at that time I was on a mission to find a tablecloth and napkins which I had seen on Nancy's Daily Dish blog HERE) -- in fact, that day we went to almost every Tuesday Morning (I have a patient husband when I'm on a mission!) and there on the clearance rack were those plates!!!

Of course, I snatched them up!!!    I have four blackberry, four cherry and one each of the lemon and kiwi.    Ten in all and if I ever see any more, I wouldn't mind getting a few extra.     I really like them for I do adore blue and white and they work so well with my transferware!!!

I'll share Betsy's recipe and my changes for instead of roasting the corn as her recipe instructs -- I found fire roasted corn at Trader Joe's -- opening a package is a lot easier than roasting corn!!!!

The dip was a huge success for three members left with the recipe.     And there was very little left when everyone was gone!

I have seen those plates before...somewhere...maybe at Tuesday Morning and I LOVED them too. I just love the splash of color the fruit makes against the blue and white. Gotta love TM! You've got me wanting to get over to the other two (I keep meaning to go to to look for the napkins and tablecloth for you). I'm having lunch with a friend today and if I have time left I'll pop into one of them.

My hubby makes almost, if not the same, dip. It is SOOOO good. My kids and I gobble it up, so I can see why it was such a hit and three people asked for the recipe.

Glad you found those plates! Fun story! Now we gotta get you the linens.

What beautiful plates! I see why you like them. And the recipe looks/sounds delicious.

I just know that there must be people in your town who, before volunteering for a committee ask 'Is Martha on the committee?'. They know that the work will always be accompanied by a treat when it's at your house.

Looks wonderful Martha! I am always interested in what you are cooking and baking. I just made brushetta for myself the other night while my husband was gone for a week to Iowa to see his mom. I even ate it again he next night as I had leftovers and it is so yummy. I put a little colby jack cheese on top under the broiler and also used green pepper.

I have never seen those plates at TM however, I plan to make a stop there today. I am looking for some blue and white either salad plates or bowls. You can never find anything if you are looking for something specific, at least that is my luck. My plan "B" would be something in cobolt blue. You luck up on some of the BEST "finds". Love that dip too, each time I make it I am always asked for the recipe.

Great way to serve a healthy treat on a hot day!

Martha,
Lovely plates, dear! What a fabulous price!!! I'm copying your recipe to compare with another that sounds very similar. All your treats look delicious! Happy hunting for more of your set!
Fondly,
Pat

Yummy nibbles...and what a fabulous find at Tuesday Morning!

Lady Behind The Curtain said...

This recipe looks awesome! Please come over to Cast Party Wednesday and share your delicious recipe with us!
Thanks,
I hope to see you there !
http://ladybehindthecurtain.com

I'll look for your plates and linens. I've seen them before at our Tuesday Morning. They really are wonderful with your blue and white. Thanks for sharing the recipe. I look forward to preparing it for my friends. Cherry Kay