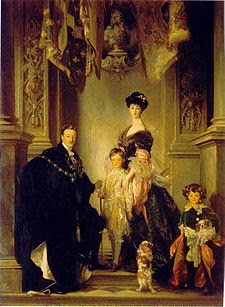 Conseulo Vanderbilt -- daughter of William Kissam Vanderbilt and Alva Smith -- had a life of privilege.    Winters were spent in the family mansion in New York and summers in her mother's idea of a "cottage" in Newport, Rhode Island.

Last week, we visited one of Conseulo's childhood homes --

Marble House in Newport, Rhode Island
Called Marble House because it is made of marble -- both inside and out!!!!

A Chinese Tea House
Which makes a great place for having lunch when you're "doing" the "cottages" in Newport! 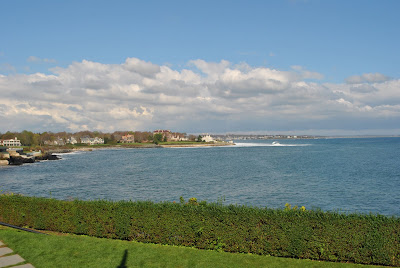 As is the view from the "backyard" of Marble House!

Conseulo summered with the wealthy in Newport.    Balls for 600, dinner parties for 50, some sort of social every night.

Especially a girl whose strong-willed mother was bound and determined that her daughter be Royalty.    So Alva arranged for Conseulo to marry Charles Spencer-Churchill, he the 9th Duke of Marlborough.    To some it seems like a "win-win" situation . . . . Alva's daughter has a title and Charles has $10 Million Dollars to spend on his family's home . . .


Blenheim Palace which we visited in May.

It was fun to see the house where Conseulo grew up -- it surely prepared her for being the mistress of the much larger (although not as extravagant) Blenheim Palace.

We enjoyed our stay in Newport -- we saw The Breakers which is the most famous house and was built by Conseulo's Uncle as well as Rose Cliff which was my personal favorite for it seemed more like a "home" if anything that big and grandiose can seem like a home!

But walking up to The Breakers my first thought upon seeing the house was "it's rather small" and it was compared to all of the lavish country houses we saw in England this spring!

It's Wednesday and I'm joining Susan at A Southern Daydreamer for Outdoor Wednesday.

Amazing!
Makes me smile to think of these houses as 'cottages.'
Thanks for sharing your beautiful pictures.

Ah, that explains the Churchill connection! When we visited Blenheim two summers ago, we were told that Winston Churchill happened to be born there because his mother was there at the time visiting friends. Perhaps she, also an American, was a friend of Consuelo's?

I can't imagine having to be the lady of such a grand house! The whole place would fall apart if that were the case. But Consuelo definitely had the right training for her role in life.

Blenheim must be beautiful. We didn;t have the time to visit it this summer but we visited some other beautiful homes. I did post a lot about them these last months.

Love this post Martha.....Thanks for sharing your beautiful pictures and tutuorial.

Msrtha, if this gets you in time, look for the Black Pearl restaurant on the harbour. I hope it's as good as it used to be in the 80's. look into it!

Martha, as I noted before, we were at Blenheim Palace two years ago when visiting back *home*.
Winston Churchill's father was Randolph Churchill, at one time the Chancellor of the Exchequer born into the honorable families of Lords of Marlborough. His mother was Jenny Jerome, an American and Winston was brought up at Blenheim Palace.
I took a photo of where Winston proposed to his wife on the grounds of the palace.

Agree with Karen that every cottage needs some marble tee hee.
Joyce M

.....and I'm sure, as in all the articles about summer homes and today's decorating magazines 'fabrics and flooring are easy care, to allow for the casual life style of bare feet, wet swim suits, sand and pets'.

Sounds like you enjoyed your Newport visit, Martha. I lived there for about 7 years - my son and daughter-in-law are still there so we get to visit. And, when we do - I love a trip back into Newport and love to take in one of the mansions. Love the Ocean Drive ride, too - yes - they knew how to live the high life in the gilded age. But, you're right, from the photos of the English manor houses - there really is no comparison. American wannabes . . . LOL!
Joy!
Kathy

When we visited Blenheim in passing, it was closed to visitors; must return sometime. I've not seen anything of the American homes but have read a biograpy of Consuelo
http://shelleyshouse.blogspot.com/2010/03/glitter-and-cold.html
and am now reading about Gladys, her successor. I also have a book about the Vanderbilts; Alva never struck me as being very nice, but the family she married into was hair-raising by today's standards. I'm glad to not live in a marble house if I don't have relatives quite that difficult! I count my blessings...Still - all that is very pretty too look at.

Oh no!!! I live in Newport!
Would've loved to have had tea with you at the Marble House.
Next time for sure.
-Debi

Debi -- that would have been wonderful!!!! I would have loved to meet you!

Lovely, thanks for sharing. My favorite vacations always include tours of fabulous homes. Karen is right...every cottage needs some marble!

These pictures are just stunning. Those water shots and lots of beauties you included in your blog. I saw the white squirrels you have. We don't have them here.
printed rucksacks