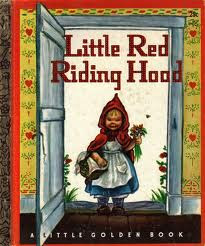 The Little Golden Book of the story of Little Red Riding Hood of my childhood . . . 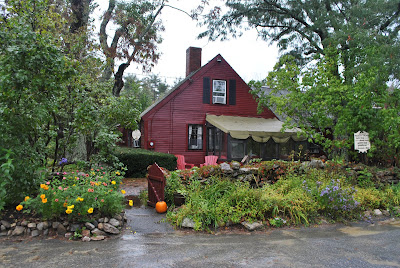 And the real life house from that book -- Grandmother's House! 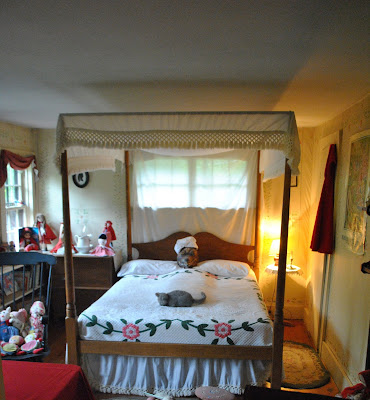 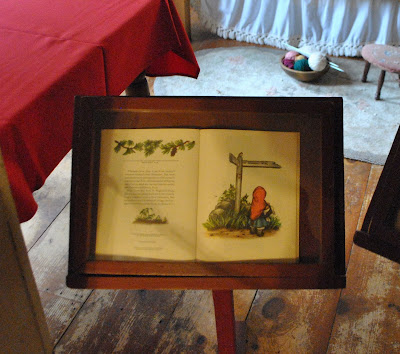 The illustrations from that book are so dear . . . 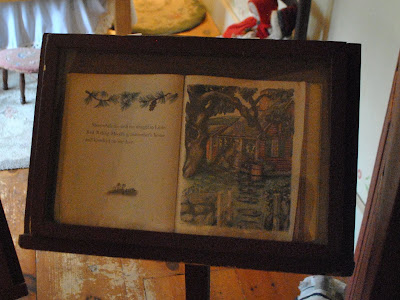 And I especially like the illustration of the house . . . grandmother's house! 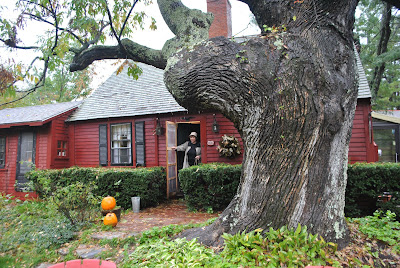 And I'm not the wolf, nor am I Little Red Riding Hood (or even a Big Red Riding Hood) and instead of a red cape with hood I have on a raincoat and rain hat -- it was definitely a rainy day at Grandmother's House! 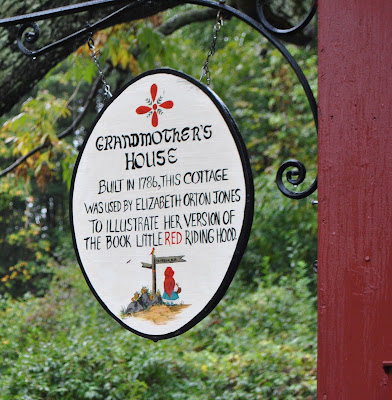 The sign at the cottage . .  . Mrs. Jones lived in the cottage at the time she illustrated the book and thus she drew on her own home for inspiration for Grandmother's House.

It's nice to see something that you're read about come to life . . . and that version of Little Red Riding Hood was the version I grew up with!     I am now off to find a copy!

The house -- Little Red Riding Hood's Grandmother's House is at Pickety Place Herb Farm in New Hampshire.    It's a bit off the beaten track and deep into the woods (but isn't that where Grandmother's House should be -- deep in the woods) but definitely worth a trip if you're in the area.

It's Wednesday and I"m sharing "Grandmother's House" with Susan at A Southern Daydreamer for Outdoor Wednesday.
Posted by Martha at 11:13 AM

What a great place!
I remember for Christmas one year, I received a Madame Alexander doll that was Little Red Riding Hood.
Thanks for sharing your fun trip with us!

Funny I should find this post today... I have 3 Pickity Place cookbooks sitting on my desk right now! Trying to find inspiration for a special event this weekend! I love Pickity Place... your pictures are fun! It's been awhile since I was there, but it really is at the 'end of the road'. Thanks for sharing your Halloween story!

Awwwww, I LOVE the tale of Little Red Riding Hood. I have that very same book, as well as a couple of other versions with different illustrators. I dressed my own little girl in a red cape on her very first Halloween. (I've been meaning to do a post on that.) I sure would enjoy seeing Elizabeth Orton Jone's home, "Grandmother's House" , some day. Thanks for sharing the pictures!

Sheets on the line, love in my heart. said...

what a wonderful blog! grandmother's house was so neat to see...and my favorite part was the large gnarly tree in her front yard!
blessings,
rebecca

I had no idea there was a "real" grandmother's house! Isn't it charming?

What a terrific post! As a children's storyteller, I thought I was big stuff visiting Mother Goose's grave at an historic churchyard in Boston on the Freedom Trail, but never could I imagine Grandmother's House would be in New England, too! Bet our good lady illustrator never imagined some two hundred plus years later folks would be stopping by to visit grandma there, still!! I should pin this so I'll remember!
Joy!
Kathy

OH my goodness, this is the copy from my childhood too, and I have mine. I didn't realize that the drawings were based on a real place. Thank you so much for this post, Martha!

And I never had a red cape for myself, but made one for my granddaughters from a tutorial at the Little Red Hen blog.....

What a lovely place to share with us. That version is the same one that I had as a child too, I was always a little scared of the wolf though!

Oh this is wonderful. The story was my favorite too an what a charming grandmothers house.

She was my favorite too! How lovely to walk into a real storybook house - and how nice of you to share it with other Red Riding Hood lovers!

I hope you and Jim stayed for lunch, it's amazing there. I've been many times. And it is so far out of the way, deep in the woods. The roads are pretty tricky getting in and out, but so worth the trip.