A Project and A Souvenir

I love to do needlepoint and did a lot of it in my early married years.    And then for some reason (a growing daughter, a career, and a busy husband perhaps) I put the canvasses and the yarns away.    Some time later, I put the pillows (or cushions in Brit speak) away.    They were too precious and I worked too many hours on them to donate them to charity or sell them at a garage sale, and so they were boxed up and moved with us to Fort Scott and to Linderhof.    There they remained in a box in a closet.

And then, one day, when I was cleaning, the needlepoint pillows came to light and I decided that chairs at Linderhof needed these cushions.    As so out they came once again and became the living room chair pillows.     Others were used on the chaise and chairs upstairs (only one of which is Mine -- and that one was certainly done in my "country" phase!)

But then when we were going on our transatlantic cruise and we would be at sea 10 of the 14 cruise days, I decided that I needed something to do beside reading books and so, I went to a favorite needlepoint shop in Kansas City, The Studio, and selected a canvas, got the yarn and needles and I was ready.

Not having done needlework for 30 or so years, I think I selected an adventuresome pattern but I liked the design and colors and felt that the finished pillow would work well in a chair in Linderhof's living room.

I made many new friends on board for lots of ladies stopped and visited with me about my pillow.    There were also lots of British ladies on board who inquired about my "cushion".    I always replied that it wasn't a "cushion" (for that goes in chair seats) but a "pillow" (for that goes on a sofa).     Once I became bilingual  and could speak "Brit" as well as "American", I learned that to a Brit a "cushion" is what goes on one's sofa while a "pillow" is one one lays one's head on in bed!     So I'm sure the Brits thought me strange to make such a fancy pillow to lay my head on!!!

It was a big project and after 10 days at sea, it wasn't half completed and so during the six weeks that we spent in England my work bag went with me and I stitched and stitched whenever we stopped and stitched more each evening as we watched television.

I stitched at Wolford Abbey, Windsor Castle, Stourhead Gardens, Hidcote Manor, and Blenheim Palace.   If I sat, I stitched!

And Husband Jim took a few pictures of me stitching away.     Looking back, it would have been clever of us to have pictures at all of those major tourists attractions as I stitched away.    Plus you could see the progress I made from one stop to the next!


It truly enjoyed it and was glad to find needlepoint as a hobby again.     I did finish the canvas before we ended our vacation and so I visited a needlepoint shop in Burford and bought another canvas -- this was a kit rather than a canvas and yarn.


This is a William Morris (who's English) kit of a fox (which wandered by our front window sometimes at Blue Row).     I'm about halfway done with it now and it is relaxing to stitch in the evenings when we watch television.    I took it on our last cruise but there were only two sea days and I didn't get as much done as I thought.     I'm hoping that I'll get it done by Christmas.

But the first canvas . . . once home, I took the completed canvas to upholsterer and pillow maker extraordinaire, Mary and last week, if finally came home . . . 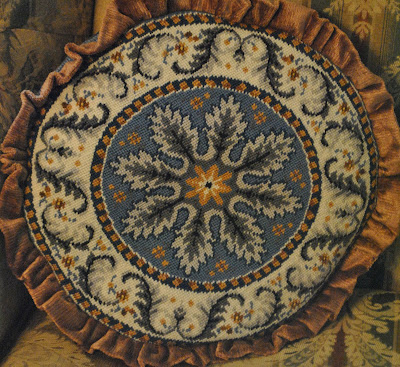 As a "cushion" which it should be since so much of it was done in England!!!!     I think it makes a stunning cushion and I am very pleased with the finished product.     Mary did a wonderful job with the stretching of the canvas and with transforming the canvas into a cushion! 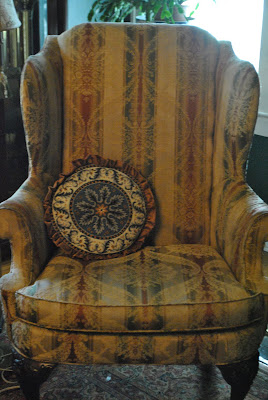 It looks right a home in one of the living room's wing chairs!

It was a project that kept me entertained during our cruise and all through our travels through England and it is also a souvenir of that trip -- many memories are in that pillow.    Almost a memory a stitch!

It's Monday and I'm joining Smiling Sally for Blue Monday . . . for my new "cushion" is filled with wonderful blues!
Posted by Martha at 4:22 PM

I love your cushion Martha! You have made a splendid job of it, and the William Morris fox looks gorgeous too. How nice to restart an old craft/hobby :o)

I would be hard pressed to say which cushion I liked more! Each have special charms...what a lovely reminder of "extra" time spent in your travels.

I have needlepoint dining chairs that were my grandmother's. Her own mother did the needlework. When they began to wear out,I could not toss them in any way. So I covered them a few years ago for a temp solution. Some day, maybe they will become "cushions".

Wonderful needlepoint! It is indeed an extra special project. I am amazed that your sight did not hinder picking it up after 30 years...... Most of the pillows I did were for my mom and she used them for decades. Alas they were worn beyond help when they finally came to me.

Martha,
Your "cushion" is gorgeous! Lovely hues! A nice accent for the Linderhof, indeed!
Fondly,
Pat

Your needlepoint pillow is absolutely gorgeous. As you know I do needlepoint as well and find it sooooooooo relaxing. The fox is so handsome. I can't wait to see that one finished. I think you have just given me inspiration for my next blog post, Needlepoint projects.

Your little round cushion is just lovely, Martha. The memories that are worked into the stitches! I love your new kit, as well. You and I love the same sorts of souvenirs.

Love the finished pillow. I, too, used to do needlepoint--taught classes, etc. But, what really caught my eye was that you purchased your next project in Burford. I know the shop and purchased yarn there to make a souvenir scarf. We loved Burford so much that when we got a new puppy we named him Sir William Charlie Chan of Burford. When I made the move back to town, I did sell all of my needlepoint.

Lovely cushion which looks right at home on that wingback chair.
The WM Fox kit looks challenging, I'll look forward to seeing that in a post soon.

Maggie -- because there is less "counting" it is easier IMO than the first one . . . and I've discovered Ehrman Tapestries and I keep looking for my NEXT project!

This is so beautiful, Martha! And the lovely fox will be too. You not only have an eye for beauty but hands for accomplishment!

That cushion looks right at home in your chair.

Happy Blue Monday to you, Martha!

Please come and peek at my blue when you get a chance. Have a lovely week!