That's what my grandmother called it as each summer she would fill jars (from little to big) with the summer's bounty.      In earlier times, it was the winter food supply but in grandmother's time, it was a luxury not a necessity.

Jars of jelly that shined like gems, jars full of  vegetables in all colors of the rainbow, and jars and jars of pickled vegetables.

My mother canned as well -- she bought and put up a bushel of green beans and a bushel of peaches.    The grapevine in the back yard provided fruit for jam for the winter, and the pear tree provided pears which she made into what she called "pear honey".     They were treats to us and the beans were saved for winter Sunday dinners while the grape jam was always on the breakfast table.

I've canned (and frozen) for the winter as well and like my mother and grandmother, it was because I wanted to not because I had to.

But I haven't really done anything for several years other than pesto.

I bought a peck of crabapples when we visited Daughter Sarah in Minneapolis.    Bought for one purpose only - to make into a crabapple jelly! 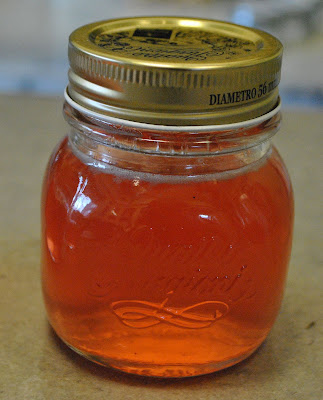 Crabapples make great jelly and all you need is the fruit and sugar for the crabapples themselves have enough pectin in them that, when cooked properly, will cause the juice to jell.

It's a pretty pink jelly for you cook the crabapples with the skin . . . and a peck of crabapples made . . . 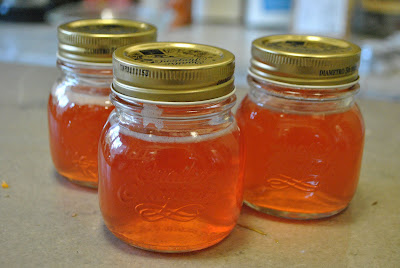 three jars of jelly.     Considering that the crabapples cost $11.25 and there is cost of sugar as well -- each of these jars is worth at least $4 which doesn't even consider my time!     They are not "gold" but are close to it!     We shall, however, enjoy these little jars this winter and I'll think of autumn when I spent an afternoon with the jam kettle boiling . .  .

And besides the crabapples, at the Applefest, we also bought regular apples.    Red Barron's (which I've never heard of).   Bought not for pies nor for jelly but for applesauce!

It's easy if you use the oven method.    It freezes well and it is absolutely the best applesauce.    I'll never buy canned sauce again! 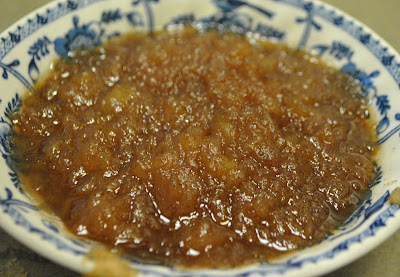 It made a nice quantity -- enough for dinner, enough for breakfast (for it's really good with yogurt) and enough to eat as luncheon dessert.      Two jars were put in the freezer -- for those winter days when we have pork chops.

Not bought at the Applefest nor even at the Farmer's market, but a gift from a friend was a flat of Roma tomatoes . . . 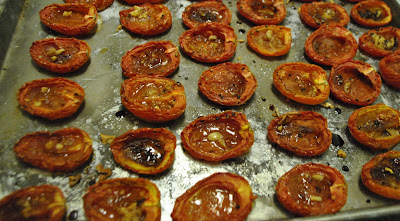 For oven roasted tomatoes are almost, almost as good as sun dried tomatoes and can last a while in the fridge.     Roasted tomatoes make a really good caprese salad for the roasting intensifies the tomato flavor.
We ate caprese for dinner and I served luncheon guests caprese as well.    The remainder are in the fridge -- for we'll have another caprese this week!

I didn't have enough pans to roast all of the tomatoes so with the remainder, I made . . . 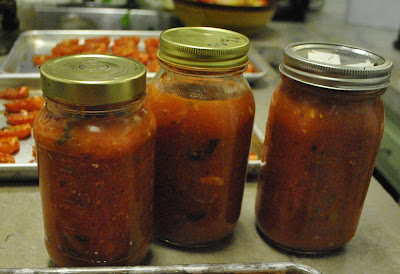 Marinara sauce.    Three quart jars.    One of which was used immediately for eggplant parmesan.   The other two were put in the freezer for quick meals. 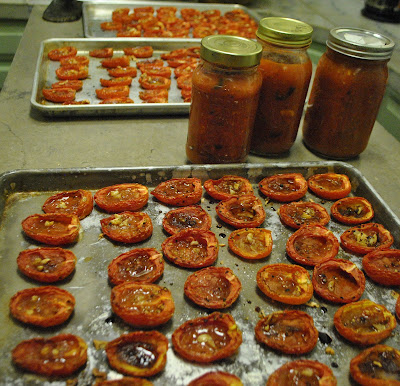 It always gives me a warm fuzzy feeling when I "put food by" through either canning or freezing.    That I am providing well for my family.

We'll enjoy the fruits of my labors during the next few months as I pull a jar from the pantry or freezer.

Since it's Monday, I'm joining Yvonne at Stone Gable for Menu Monday.    Stop by Stone Gable and see what everyone is fixing this week!

Martha,
When you open those jars of "gold" crabapple jelly you will enjoy how wonderful it is to have something made with wholesome goodness and love...things money and the supermarket can't provide. My belated Mother~in~law always made crabapple jelly. It was the best jelly ever on toast! Thank you for the memory!
Fondly,
Pat

It's so satisfying to see foods preserved for special treats in the winter. For me, making jelly and preserves is a labor of love. My aunt still cans green beans, and I still make fig preserves and freeze peppers for winter use. I enjoyed seeing all your 'labors'.
Have a great week.

Your jars of jelly are gorgeous...will bring such light to those dark winter days! Applesauce looks good too, but I have never done it in the oven...and I did not know about oven drying tomatoes either! Lots of ideas here tonight!

What wonderful treats you have in store for you this winter!! And you put in a lot of work which makes them extra special. Love how you made the roasted Roma tomatoes. And herbs or spices added?

It's such a lovely feeling to take jars of preserved food out of the pantry and know that you were the one who did the preserving. I am so happy that my daughter has caught the canning 'bug' and has made pickles, jams and jellies this fall.

Nothing better than enjoying the wonders of the harvest during the dead of winter. I'm so sorry I didn't take advantage of the crabapple tree at the house we owned for more than 5 years. Young and dumb, what can I say.

We "put up" jars of green tomato relish this year and shipped some back to Florida. The rest has been seized by kids and is most likely gone!

Next summer we will do more.

Beautiful jars full of harvest goodness! Home canned food is always better tasting, and better quality food. I love to can.
I've never canned crabapple jelly before. I need to give it a try, especially considering that we have hundreds of crabapple trees in our little town. We planted 3 just in our yard.
Love this post :)

Oh crabapple jelly! I haven't tasted that in years. Yes, you WILL LOVE opening a jar in midwinter, and it is so satisfying to be stocking the larder with the fruits of your own labor.

Beginning at the end of August each year, I get "nesty," (as opposed to nasty!) -- I want to put up food, and knit, and fluff up comforters -- just get everything ready for the winter to come.

I think that's a pretty primitive urge among women, don't you? Nowadays we don't have to "do" for ourselves in the same way, but the instinct is still there.

BTW I roast tomatoes, too, but I freeze them flat in Ziploc bags, and they keep a LONG time.

I think I want to live at your house, Martha.
Cass

I've made crab apple pickles, but never jelly. Your jelly is beautiful!! I made some grape jelly on the weekend from concord grapes a friend gave me! We will enjoy these jellies this winter, won't we! ;0)