Reprise -- It's Fall Outside Too!

This was a post from September 29, 2009.     I love outside fall decorating almost as much as I love putting the annuals out in the spring!     Perhaps it's because the summer heat and dry have done a number on the flowers in the planters.    Perhaps I'm just tired of the way things are that I want a change!


I still buy way too many pumpkins -- I just can't resist!    And then, after Thanksgiving, I always vow as I load pumpkin after pumpkin into black trash bags for the garbage that I won't do it again next year . . . and then I always do!!!!


I'm joining Chari at Happy to Design for Sunday Favorites.

Outside fall decorations are simple at Linderhof -- mums and pumpkins. Mums bought in tight bud so that they will last longer. Pumpkins in all sizes. Each year I promise that I won't buy so many . . . there are so many pumpkins to get rid of after Thanksgiving . . . but mid September to October is a long time . . . and pumpkins one by one creep into Linderhof's garden.

I don't have set plans for outside decor -- the placement of mums and pumpkins vary from year to year. 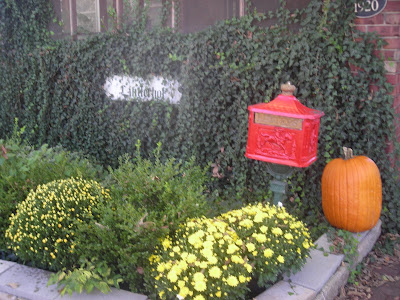 Three yellow mums -- fairly big ones -- in pots not in the ground and a huge pumpkin around Linderhof's mailbox. 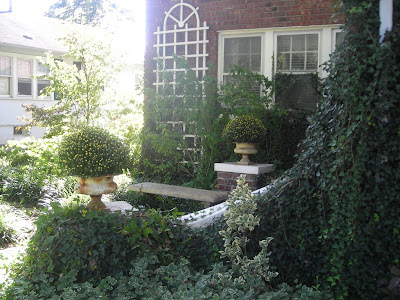 The summer geraniums are replaced by more yellow mums -- also in tight bud. They'll be prettier in a week or two. But they will last all of October and even into November. I'll take the lesser color now for longer color later. 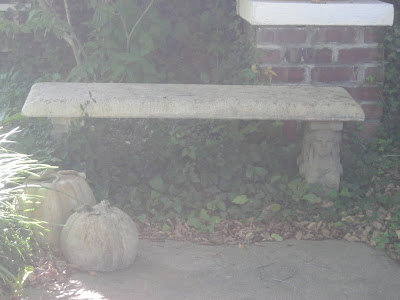 My only permanent outdoor decoration -- two concrete pumpkins. They do turn around to Jack O Lanterns. The leaves (which we leave) are mother nature's contribution to our fall decor. 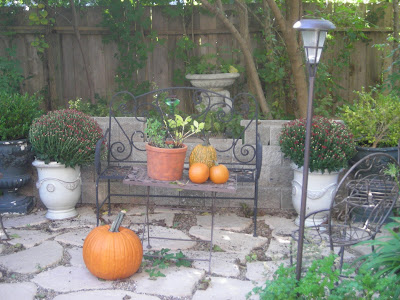 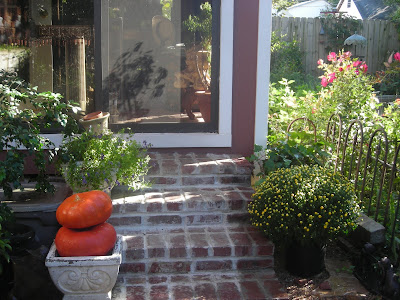 And the back stairs -- a couple of Cinderella pumpkins replaces a tired summer annual in the concrete pot. A pot of mums adds fall color.
In the garden itself, sedums, mums and asters add fall color. And we're waiting for the Autumn crocuses to bloom.
Posted by Martha at 5:57 AM

ALL so very beautiful - but those concrete pumpkins (reversible, even) have REALLY captured my fancy. I wonder where I might find some like them?!?

I love the way Linderhof looks in the Fall with all your pumpkins and mums, so beautiful. I need to get to the nursery to find me some mums, hopefully tomorrow.

Lovely Martha, how have you been? We have been so so busy, I hope to now get back to blogging more faithfully. I want to get my porch decorated this week for Fall too.
Hugs, Linda