That was me -- last Thursday.     When I answered the door, there was the friendly Fed Ex man (he is a familiar face at Linderhof -- we even give him cookies)  with a smile on his face and a big box in his hand!

Not one of our regular boxes -- husband Jim's cigar boxes or my book boxes from Amazon.com but a big skinny box.


Much bigger than most of our usual boxes and with an up arrow -- so the box is not to be "tossed" around!


Was another box -- with instructions on how to get the "goodie" inside -- out!

And inside was this!


A beautiful white orchid -- a double!    I learned at Bird's Botanicals that doubles are very precious!    From friend Cass of That Old House.     What a treasure!

What is one to do when a dear friend gives you such a wonderful gift?

Invite her to tea, of course!

I issued the invitation and Cass "flew" through Cyberspace to Linderhof.

Since it was a rainy day at Linderhof, we set the tea table in the living room . . .


Perfect for tea for two.


The orchid, of course!     So that we both can sit and admire the beauty of this tropical treasure!   A gift from one friend to another.

The Indies cup and saucer.     We're both in love with Johnson Brothers Indies pattern and we both have dishes in this pattern.    Mine (at least two cups, saucers, creamer and a wee teapot) came originally from England on a long ago trip.     Cass acquired hers here.     When I went to England this spring my goal was to find Cass that wee teapot.    But, alas, there was almost no Indies to be seen.   And definitely no teapots -- of any size!

Since we were having tea in the living room (or parlor if you will), we had the hot water in the spirit kettle


which is actually part of my tea set.    But the little flame keeps the water hot so that you can brew and pour tea . . .

in the pot.     This is an Estate Sale find from just before our English trip.    It's English and far older than I had thought and it's price was the same as the dinner that I didn't go to that night.    In my feminine way of figuring things out, it cost me nothing!

The tea, a good Earl Grey, kept in the


1850's tea caddy which was brought home from England this spring.    An always wanted and now have.   It has a key, because in Victorian times, it was kept locked and only the mistress of the house had the key -- tea was precious then.


A pound cake, served on a Spode Blue Italian sandwich plate with a cake knife I brought home from England


It's a cozy tea table.   All blue and white and silver with the golden glow of polish mahogany of the tea caddy.    The gift orchid presides over all.

The tea table -- a Craig's List find -- it's a Williamsburg reproduction and it is a beautiful table.


Such nice carvings on it's legs with it's talon and ball foot (not claw and ball but talon).

And it's not an ordinary tea table, but one with the birdcage mechanism which allows it to . . .


Turn to the left so that Cass can slice a slab of cake and then . . . 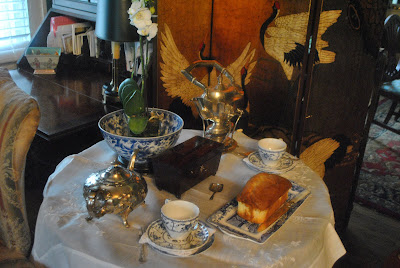 It turns to the right so that I can slice my slab of cake.

Cass sent a note with the orchid which read: 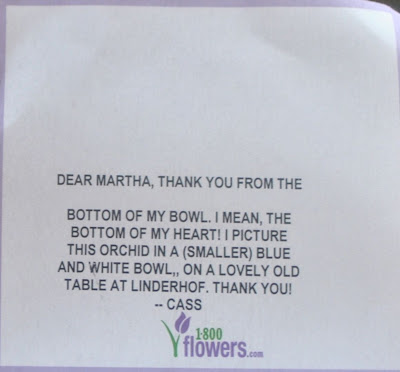 
Tuesday Tea for Two with Wanda Lee at The Plumed Pen
Tea Time Tuesday with Sandi at Rose Chintz Cottage
Posted by Martha at 5:17 PM

What a special present! How thoughtful and kind of your friend!

Love that 'Craigs List' table. I'd better check out their listings more often.

Hope you have a wonderful week. Sure seems that it's off to a great start!

Ah, friends! How sweet of her to send you such a precious gift! Tea together must have been the best part. Your tea setting of course, is fabulous, love the JB tea cups and saucers too! The tea pots and tea chest are fabulous as well. Thank you so much for sharing with us.
Hugs,
Terri

Martha,
How very precious to have such a dear friend...what ever would we do without our Blog Land friends! A cyber~space tea...perfect!
Fondly,
Pat

The orchid is nearly as beautiful as your tea table. What a special gift to receive from a friend :-). Have a wonderful evening, Martha. Blessings...Mary

Just beautiful in every way!

What a dear friend you have to send you such a fabulous orchid!
How lovely your table looks too Martha :o)

A double orchid! How kind of Cass to send you this treasure.
The tea table is lovely for such a special friend.
Judith

What a wonderful FedEx delivery that was! I'm sure we'd all line up for a cyber tea at Linderhof.

Hello Martha,
amazing, that FedEx can deliver such a delicate flower wrapped in a parcel. How nice of Cass to send it to you. And your tea setting is reall charming. All the wonderful things make the setting Royal looking. Thank you for sharing this tea time and enjoy the pretty orchid.
Best greetings, Johanna

Dear Martha,
What a lovely gift from your friend Cass. Your table is fabulous and the tea, a treat for special friends. I love the JB Indies pattern too. Actually, I love anything made by JB. Thanks for sharing your beautiful orchid and tea for two with us today. Have a delightful week and enjoy your posies.

Well, Martha, I'll take the pound cake ... but what are YOU going to have?

You didn't mention that my sending the orchid was a small thank you for your sending that gorgeous big blue and white bowl to ME!

I had so much fun flying out to Linderhof ... on my broom.
A few bugs in my teeth, but it was worth it.

The orchid is gorgeous and so is the "Craigs List" tea table! Love the tea pots, tea box and tea cups, everything is lovely and the yummy cake too! Come over for some tea, you bring that yumminess! Hugs,
FABBY

Wow, what a delightful tea. I think I might have enjoyed it nearly as much as Cass.

What an awesome present from an awesome friend. I am loving the new linen and the bread plate. I can't wait to put cranberry bread on mine over Christmas. You gave me a wonder idea. Thanks so much!

Lovely gift... Fabulous table.. The teatime ambiance looks quite complete and charming... I 'd love to settle in for a cup of tea... Thanks for sharing ..Hugs

What a beautiful, special gift you received from Cass. Equally lovely is your tea setting. Your antique tea caddy is so pretty. I have a nice reproduction but I love the wood grain on yours. Your silver is stunning to!

Friendship! What a gift. And what a lovely tea. You have beautiful things and it's a joy to see them.