This post, from November 1, 2010, tells the story of my little turkeys -- the first one bought oh, so many years ago.    I also have a matching salt and pepper.       My mother was very traditional in her tables, but at Thanksgiving, there was a turkey salt and pepper for the table and at Christmas at Mr. and Mrs. Claus -- they're part of my tradition.


I put away the turkeys for a while -- having tired of them -- turkeys were so "overdone" and became enamored with silver pheasants and quail which were on either side of the big blue bowl filled with pumpkins and gourds.


But after a while, I tired of the pheasants and quail and there the turkeys were sitting on the shelf . . . just waiting for their return to the dining room table!


I'm joining Chari at Happy to Design for Sunday Favorites. 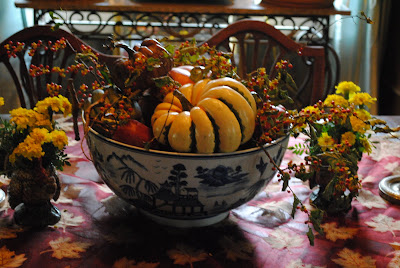 These two little ceramic turkeys -- the first bought years and years ago -- actually, the second November after our wedding while his matching brother was bought after we moved to Linderhof. I like things in pairs!

And although as a new bride, hosting Thanksgiving was something I didn't even think about, I knew someday that the turkey would be perfect for the Thanksgiving table!
And he was!!! So much so, that I decided that I needed two!!!! 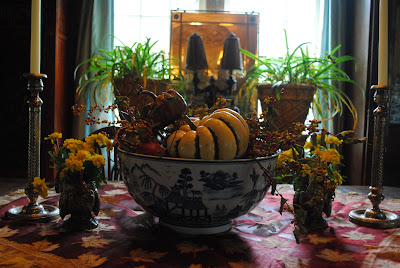 It's November and so the turkeys came home to roost. Nestled next to the bowl of pumpkins and bittersweet, filled with garden marigolds (and after the frost gets those, grocery store mums).
A bit of a change from an October table to a November one.
The turkeys will reside on the table until all of the fall finery is put away to be replaced by Christmas.
It's nice to have keep traditions -- even some as silly as these turkeys.
Posted by Martha at 6:22 PM

Such a lovely family tradition! Love your turkeys :o)

Cute little turkeys..fun that you have had them so long..I love your bowl centerpiece too! What a lovely table!
Miss Bloomers

You always have interesting stories about your treasures, and being sentimental, I love hearing about the history of each piece. It is comforting to me to have traditions that I use each year, and even though turkeys are in abundance, I always love turkey items.

I love your turkeys. We have lots of turkeys in our family. However, some are not on the table. have a great weekend. Ginger

Ginger -- you crack me up!!! My husband's favorite Thanksgiving saying is "may all your turkeys be on the table not around it"!

Nothing silly at all about the turkeys, Martha! It's traditions like those that give special holidays such heartwarming character.

Okay, I am bowled over (hahaha) that you were able to find a matching turkey to your newlywed one. Now THAT is amazing .. wherever did you find it?

Turkeys belong on Thanksgiving tables; they've earned the right, I think. We have turkey S&P shakers, turkey tureens for cranberry sauce, a turkey gravy boat -- yes, there's a pattern here. And one Thanksgiving someone gave me a teeny tiny pewter turkey and he's always somewhere, watching, on Thanksgiving.

And of course, there's my Mom's old turkey platter for the ... turkey.

Love those candlesticks, Martha.
Beautiful table!
Have a wonderful Sunday -- wait till I show you what we're picking up today, for $25. :-)

Sheets on the line, love in my heart. said...

love your turkeys. great thanksgiving decor is a bit hard to come by. your turkey table centerpiece is "the bomb"
love it,
rebecca

I love your traditional turkeys, my friend! They look so cheerful with the bright yellow marigolds! A beautiful autumn table centerpiece...thank you for sharing it with us for the Sunday Favorites party today!

Your table always looks so welcoming.

Martha,
I adore traditions!!! Your table is lovely with your turkeys! I enjoy the history behind how you recieved them!!!
Fondly,
pat