On the last day of the year, I so enjoy looking back and seeing what that year has brought.    And as I did last year, I'm reliving 2011 through my teas.     For everyday that I'm home (and everyday that we were in England) I stop at half past three and have a cup of tea.      Sometimes a friend or two will join me and sometimes I have a real tea party.    But the ritual of afternoon tea is a big part of life at Linderhof.
January 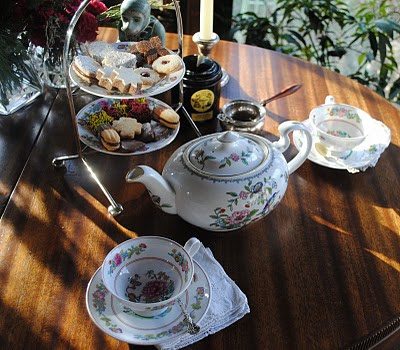 Tea for two with goodies from a favorite bakery in Kansas City -- Andre's.   I'm using my Spode Famille Rose tea cups and saucers and my Aynsley Pembroke tea pot. 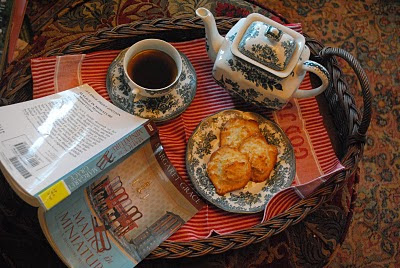 A February Afternoon finds me in the living room in front of the fire with a good book and a cup of tea. The Wedgwood Asiatic Pheasant teapot, cup, saucer and tea plate. 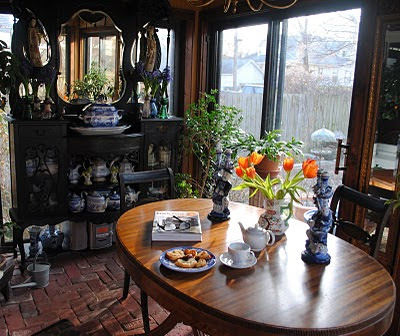 Tea for one at half past three.     Burleigh Asiatic pheasant teapot and tea cup and Johnson Brothers Asiatic Pheasant plate.    A book and good music and it's a delightful respite. 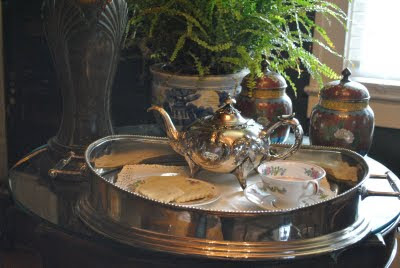 And what better way to celebrate The Royal Wedding than with tea (even though it was morning tea in America and not afternoon tea!) -- an old English silver tea pot, my Spode Famille Rose cup and saucer and lavender shortbread imprinted with "Kate and Will". 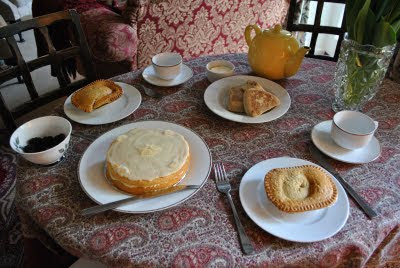 An English High Tea.     Pies, cake, scones, cream and jam.    At our cottage in Wiltshire.   I would have preferred the Spode Blue Italian but it was locked away (sigh) and so I settled for the kitchen dishes! 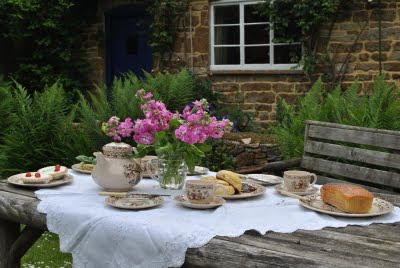 Tea in the Garden at Blue Row, our cottage in the Cotswolds.    We invited a friend who we met.    The china is English and was our everyday (and only) china that we used at Blue Row.    Sigh, I would have preferred something blue and white, but . . . 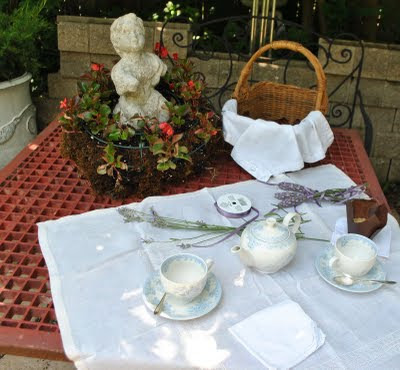 Tea in Linderhof's Garden.     Friend Sally came over and we sat in the garden and had tea as we made lavender wands.    A skill I had and a skill she quickly learned.     The Burleigh Asiatic Pheasant tea pot, tea cups and saucers. 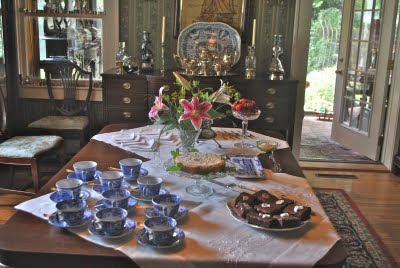 Friends for Afternoon Tea.    Those friends who helped Linderhof "run" while we were gone -- who kept the flowers watered, Ollie fed and walked, and who mailed those bills that I couldn't do online, were invited to a full afternoon tea.     The Spode Blue Room cups and saucers -- for I have enough of those for all the friends I invited! 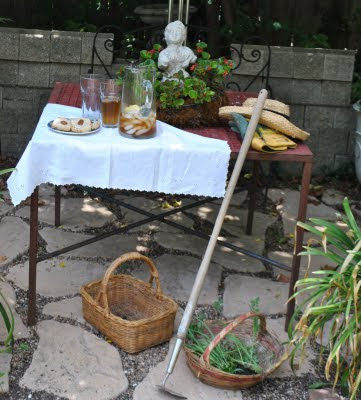 Tea in the Garden.    Lots of "catch up" to do with weeding and such since we were gone . . and I'm a fair weather gardener -- if it's too hot I stay inside.    Icy tea and an extra glass in case a neighbor peeks over the garden fence. 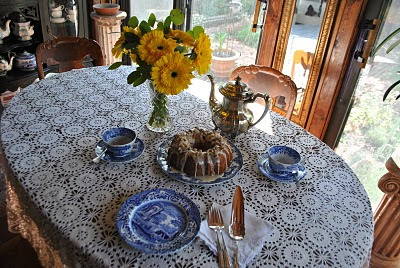 Afternoon Tea and Cake.    In the sunroom with my grandmother's silver pot, my Spode Blue Italian cups and saucers and cake plates.   The treat -- a black walnut cake. 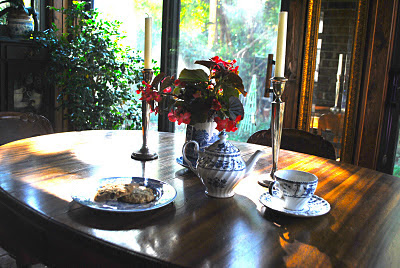 An Afternoon Ritual.     It's just me and it's half past three.   My Johnson Brothers Indies -- my everyday tea set -- the cup and saucer and wee tea pot brought back years and years ago from England. 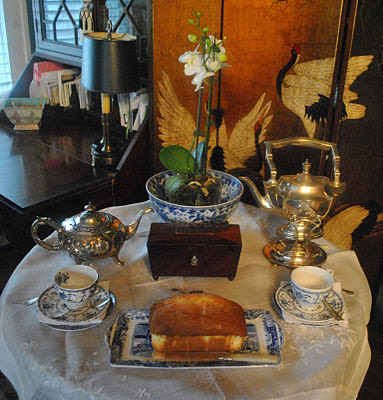 Tea with Cass.   (From That Old House) sent me a beautiful orchid which took center stage on the tea table in the living room.    Because it's Cass, the Johnson Brothers Indies (which we both adore) cups and saucers, a new Spode Blue Italian sandwich plate for the cake, the English silver tea pot and the spirit kettle from my tea set. 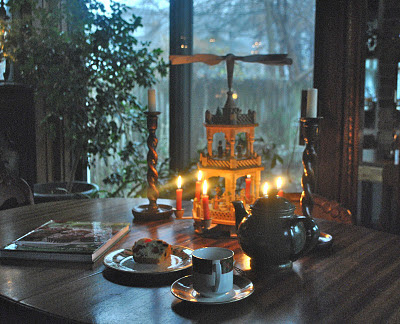 A December Afternoon Tea.     The candles on the pyramid are lit, the tea cup and saucer is the Royal Doulton Tartan (that I hand carried home from a trip to England) and the tea plate is Lenox Holiday (because I could never find tea plates in the Tartan).

I've enjoyed this look back at afternoon teas at Linderhof during 2011.    And I look forward to sharing more pots of teas with friends in 2012.

Happy New Year and so looking forward to seeing the Linderhof month by month in 2012!

I wish I could have joined you, even just once! They all look so lovely! Your afternoon ritual makes me see how important it is to take time for oneself and having tea and a treat is the best way. Lovely pictures!

Wishing you joy, peace and happiness in the coming year!

Martha,
How does one choose a favorite??? Tea in Linderhof's garden reminds me so very much of my maternal Grandmother...that would have to be mine. I have similar linens that belonged to her. Because I was such a TomBoy growing up, she would often serve me snacks out on her cystern (above ground well)and this photo just takes me back to age 6 or 7 years old! Lovely Year of Tea in Review!
Fondly,
Pat

Martha, I enjoyed every single one of those afternoon teas with you!

Martha, this was just a beautiful blog this evening; I enjoyed it so!
I have most of my Christmas away, keeping out red cloth, white angels, a snowman or two. I also took the time to weed my cups and saucers. Pulled out 13 I think I can live without and I can not see any big whole left in the cupboards! Happy New Year to you.

If I win the lottery one of these days, I promise I will fly and have tea with you and Oliver at Linderhof. I can't think of a nicer way to spend an afternoon any season of the year.

Have a Happy New Year.

Martha, loved all of your teas, but the special ones were in England. I too have tea and goodies in the afternoon, a British habit which I have never given up.
I wish you and your family and Oliver, of course, I Very Happy New Year and look forward to your posts in 2012.
Meg

A lovely collection of teas and yummies. Happy New Year, I wish you all the best in 2012!

How wonderful to review the year with teatime treats!
Sending all best wishes for a happy, healthy and prosperous New Year from Normandy.

what a lovely gallery of teas!

What a lovely retrospective of beautiful tea settings to mark times of blessed solitude as well as precious moments with dear friends. Thank you for inviting us along for the journey. Happy New Year! Cherry Kay

What a beautiful journey! Looking forward to the 2012 retrospective!

Very lovely site. I love your corgi. I have two corgis too.