Panettone -- It's Not Just For Tea

We're not Italian.    There's not an ounce of Italian in our blood.    But we love panettone.    For years, we've bought at least one at Christmastime. 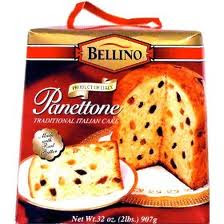 It's a good tea bread and it's great toasted for breakfast especially with scrambled eggs. 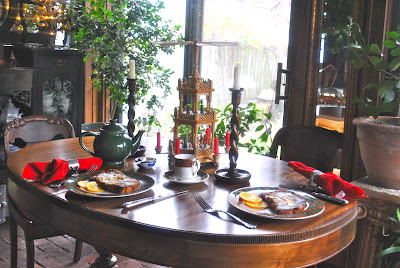 And it also makes for a lazy Sunday breakfast -- French toasted! 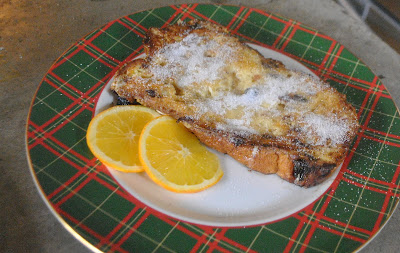 We like our French toast sprinkled with granulated sugar.    No powdered sugar or syrup for us. 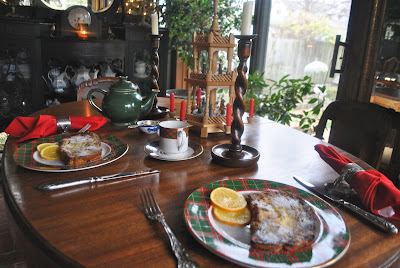 We're using our Christmas china -- as we do for every meal all during December.    It makes the month seem more festive and special.


PANETTONE FRENCH TOAST
1/2 purchased panettone
3 eggs
1 cup milk
Grated zest of 1 orange
1/2 c. fresh orange juice
1 T. Cointreau (or other orange liqueur)
3 T. sugar
1/4 t. cinnamon
Freshly grated nutmeg to taste
Cut the panettone into 5 or 6 vertical slices, each 1inch thick.    Discard the end slices.    Cut the remaining slices in half.
In a bowl, whisk the eggs until just blended, then whisk in the milk, orange zest, orange juice, Cointreau, granulated sugar, cinnamon and nutmeg.    Pour the egg mixture into a pie pan and add the bread slices.   Soak, turning once, about 10 seconds per side.
Heat griddle or skillet on medium heat and brush with butter.    When the butter foams, add a few of the bread slices (do not overcrowd).   Cook, turning once, until lightly browned, 3 to 5 minutes per side.    Turn the slices over again and cook for a few minutes more per side until browned to your taste.
Using a slotted metal spatula, transfer the French toast to serving plates, place them in the oven and turn the oven to 200.    Repeat to cook the remaining bread slices.
And as it is good for breakfast -- French toasted -- so it is good for afternoon tea. 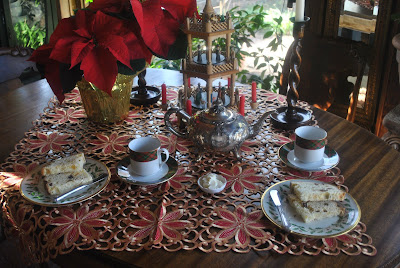 Sliced with a nice orange butter to slather on. 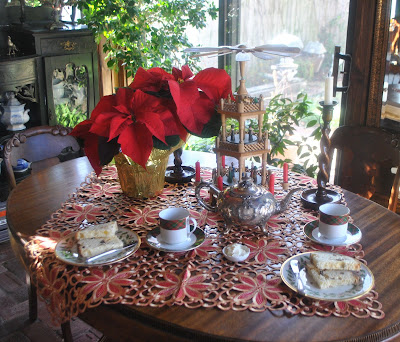 Friend Shirley Ann came over and we lunched and shopped and then ended at Linderhof with a pot of tea (Harney's Hot Cinnamon) and the panettone and orange butter.

We've never attempted to make panettone.    It's too easy to buy!


It's Tuesday and I'm joining the Tuesday Tea Parties:


Tuesday Tea for Two with Wanda Lee at The Plumed Pen
Tea Time Tuesday with Sandi at Rose Chintz Cottage
Posted by Martha at 4:04 PM

i love your table setting. The little centerpiece in the middle brings a flood of memories. When we lived in Virginia- many of the military families had them from Germany and also nutcrackers! Your menu looks delightful!

I love making Panettone. I get the flori di Sicllia from King Arthur Flour. I soak the dried fruit in rum for several days first, then make their recipe in my bread maker. It is so superior to that sold in stores that was made in Italy weeks and weeks ago.
I know you like to make bread, you should try it. You'll be glad you did.

Here in Brazil Panettone is a Xmas tradition , every table have it!
Delicious!

Martha,
I'm intriqued about the Panettone.
I'm not familiar with this bread, but will look for it at the grocer soon! Lovely tablescape for breakfast and for tea! How nice to have festive dishes just for December!
Fondly,
Pat

You've convinced me to buy some panettone.
Your breakfast looks divine.

Have a great evening.

Martha, you make panettone so very tempting. I have never tasted it, but now I think I must buy some next time I am at World Market, instead the delicious German stollen. I can't handle TWO such tasty treats in the house at the same time!

Oh yum, I love it! We used to toast Panettone and serve it with fresh fruit for Christmas morning breakfast when I was a little girl. At that time I didn't have any Italian connection, except that the city we lived in in South America had a huge number of Italian immigrants, and it was THE bread of choice at Christmas. Years later I married into an Italian family, and so continue to enjoy Panettone. Your french toasted version looks really delicious!

Martha, this looks so yum! Your table looks so festive and the Panettone sounds delicious. Thank you for coming to tea today. I got you linked up with no problem. Have delightful week.

Oh, my ... PANETTONE French Toast ... I bet that is a treat! Thanks for the recipe. I use my Christmas dishes everyday, too. Happy Tea Day!

Your table looks very festive. I made Panettone once, in my bread maker years ago but would much rather buy it too.
I like my french toast with syrup, hubby likes his with ketchup - we're all different!
Judith

Hi Martha,
I agree fully. Panettone is the most fluffy, delicious Italian cake. I love it also for breakfast but never tried to make a Frech toast with it. Sounds yummy. Your Christmas china and the silver tea pot are really impressive. Thank you for sharing all those pretty settings.
Best greetings, Johanna

I just want to say I love your town. We came through a week ago on Sunday. I was delighted to see your beautiful fort and the lovely and charming town. I did shop at the two downtown antique shops and of course some vintage china came home with me. Both of these patterns were by Johnson Bros. I told the sweet lady at the antique store to mention to you we came there because of your wonderful blog. We were coming back from visiting my son, in Kirksville, Mo, who is a sports anchor and reporter for ABC. My husband was especially thrilled with the history in your town for he is a historian and wants to visit the fort and town again when it is warmer. I love visiting your blog and tea is a wonderful thing! I saw in your photos the cabinet in the dining room with the antique teapots. Would you please do some close-up photos they look so beautiful. Happy Tablescaping! Pam

I totally agree! That's about the only time we can find it around here, so...I too, love it french toasted for breakfast as well as buttered for tea. Lovely setting as well!
Ruth

You only buy one! :)
I love Panettone - all the ways you've suggested, and then in a bread pudding, the like of which you've never tasted!

This looks so good, Martha.

We are going into StL next week. Will be near Trader Joe's where I bought Panettone last year and made French toast. I am going to pick one up and also chocolate oranges. Have to have those for Christmas!

Martha...Love your table settings. Here we have Panettone's in every supermarket, all year round. In Toronto we have an extremely large Italian community.
My husband likes to have his in the afternoon with some tea......
We have so many kinds and sizes it's hard to choose, usually for Christmas one of my neighbours gives us a big one.

You may stop by for fresh Italian Panettone at our house anytime during the holidays! Matter of fact, I have a nice large loaf ready for slicing in my Christmas teatime post. Trader Joes sometimes sells panettone made with dried cranberries, but good old candied orange peel and raisins are scrumptious. Nice photos, nice recipe. Happy Advent~
poetryinapotoftea.blogspot.com
Hope you come by for a cuppa at my Cup Of Chritmas Tea,
shawn