Epiphany is January 6 -- it's the culmination of the Christmas season and for those of us who are traditionalists, it is the day to take down Christmas decorations.
The past few years, we've had much simpler decorations -- real greens on the mantles and few Christmas things to sit around the house.     Decorating in December is much easier and it is even easier to take down Christmas in January!     Most of the decorations (the greens) go into trash bags and out to the curb -- less trips up and down those basement stairs.
And this year, we had a real tree -- which simplified the undecorating even more so -- the ornaments and lights into boxes and into the basement (and fewer boxes than in years past -- just two trips down!) and the tree also out to the curb where our thoughtful city will pick it up -- for free!
And once the decorating is undone and the house returned to the sparseness of January, we sit down to a cup of tea . . . and a nosh! 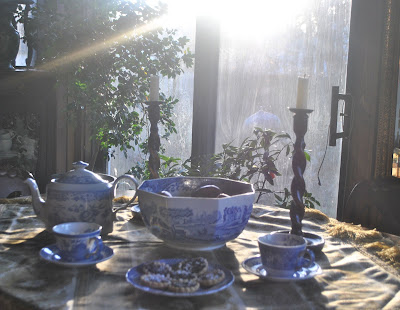 The pyramid gone from the table and a Spode Blue Italian bowl filled with apples will be the centerpiece until the daffodils bloom when we'll start having pitchers of fresh flowers on the breakfast room table.    My old barley twist English candlesticks for we eat dinner by candlelight are on either side. 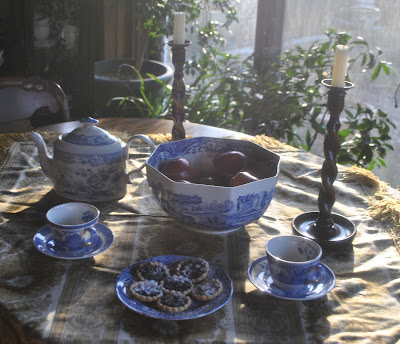 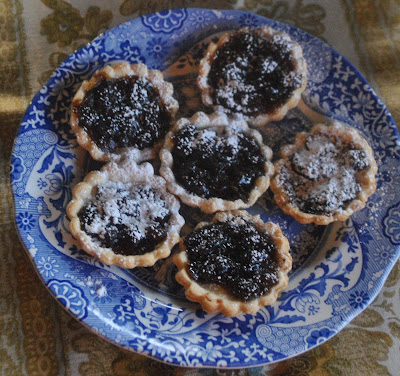 Mince pies -- a traditional English Christmas tea treat which is just as good on Epiphany!

Epiphany is the day that the Magi visited the Christ child in the manger in Bethlehem. 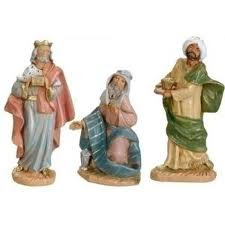 Some people don't add these figures to their nativity scene until January 6 -- but we're not purists and the three wise men (and their camels) are put out when we put out the nativity set.

And if you adhere to the 12 Days of Christmas, January 6 is the day that your True Love gives you 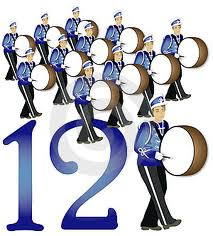 I wonder if Husband Jim will have any surprises for me this year?

The mince pies are quite tasty.    We enjoyed them for Christmas Day tea and since I had leftover mincemeat I made another batch and they were the perfect Epiphany treat.     I bought my first Nigella book when we were in Las Vegas in early December -- her Christmas book and I absolutely adore it.    These mince pies came from the pages of that book and they are "scrummy"!

A new "toy" was my tartlet pan from Williams-Sonoma and it was perfect for these pies and made them much simpler to make!


Nigella's Mince Pies
1 2/3 c. flour
9 T. cold butter
Juice of 1 orange
Pinch of salt
Approximately 2/3 cup mincemeat (I used jarred Nonesuch)
Confectioners sugar for dusting
If you don't have that wonderful Williams-Sonoma Tartlet Pan, get out your 12 hole mini muffin pans along with a 2 1/4 inch fluted, round cookie cutter.
Mix together the orange juice and salt in a separate bowl, cover and leave in the refrigerator to chill.
Put the flour and butter into the bowl of a food processor and blitz until you've got a pale pile of cake like crumbs.    Pour the salted juice down the funnel, pulsing until it looks as if the dough is about to cohere; you want to stop just before it does (even if some orange juice is left).   If all your juice is used up and you need more liquid, add some iced water.
Turn the mixture out of the processor onto a work surface and, using your hands, combine to a dough.    Then form into 3 disks (you'll need to make these in 3 batches, unless you've got enough mini-muffin pans to make all 36 pies at once).
Wrap each disk in plastic wrap and put in the refrigerator to rest for 20 minutes.    Preheat the oven to 425.
Roll out the disks, one at a time, as thinly as you can without exaggerating.    In other words, you want a light pastry case, but one sturdy enough to support the dense mincemeat.    This is an easy-going dough, so you don't have to pander to it; just get rolling and patch up as you need.
Out of each rolled-out disk, cut out circles a little wider than the indentations in the tart tins.   I use a fluted cookie cutter for this.    Press these circles gently into the molds and dollop in a scant teaspoon of mincemeat.
Put in the oven and bake for 10 to 15 minutes.    Keep an eye on them, as they really don't take long and ovens do vary.
Remove from the oven, prying out the little pies right away and letting the empty tin cool down before you start putting in the pastry for the next batch.    Carry on until they're all done.
Dust over some confectioners sugar by pushing it through a tea strainer.
It's Friday and I'm joining Michael at Designs by Gollum for Foodie Friday.

A happy and blessed New Year to all at Linderhof -- 2 and 4-leggers alike!

I'm trying to ease back into blogging, but it's not easy; I'm out of the habit now and I've gotten lazy!

Got to kick my own self in the behind to get going again.

Mince tarts are the food memory of Christmas for me - yummy!
We put our kings to the side of our creche, bringing them to the front on the 6th.

I am almost done undecorating, but I figure greens and berries are the seasonal floral arrangements. I love your blue & white and the whole idea of sitting down to tea after Christmas decorating is put away.

I love all your blue.... We also eat dinner by candlelight. I took the decorations down a bit earlier - too much construction dust LOL

Martha,
Sorry I haven't visited for a few days...had the computer in for repairs and now I'm trying to get "caught up"! Ha! Finally, the lower level no longer looks like a diaster zone...with no computer...I made myself finish putting the decorations away!!! Lovely tablescape and those noshes look divine! See you soon!
Fondly,
Pat