We love roast beef especially for Sunday Lunch -- a tradition of my childhood (but we called it Sunday Dinner) and a tradition that we reacquainted ourselves with during our stay in England.     And no matter how small the roast, for two people there will definitely be leftovers!!!!
But we don't think of roast reruns as "leftovers" but rather new meals.     The second night it was made into what my mother always called "hash" -- leftover meat and vegetables warmed in the gravy.    I took it up a notch by roasting additional carrots and potatoes to add to the mix.    It was very good for it was a cold evening and the rest of the hash made a great lunch the next day.
But, still there was some meat left over and so our third day of beef was turned into 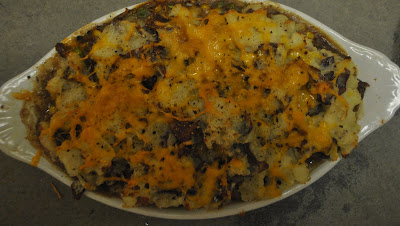 Shepherd's Pie.     It used the last of the beef, I mashed fresh potatoes and added some cheese on top and then put it into a hot oven where it got all warm and bubbly. 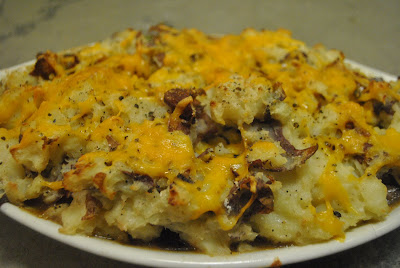 More of the same roast but neither of us felt as if we were eating "leftovers" -- for it was not a "redux" but a new meal.

White asparagus.    Found in the market and served with an herbed lemon sauce -- from Country Weekend Entertaining by Anna Pump -- one of my all-time favorite cookbooks.     The sauce is good with green asparagus, too, but it looks extra pretty with the white.

We made the most of the beef and had three delicious dinners and one true leftover lunch.   Not bad for the price of the beef!


Shepherd's Pie
4 large potatoes, peeled and cubed
1 T. butter
1 T. finely chopped onion
1/4 cup  shredded Cheddar cheese
salt and pepper to taste
5 carrots, chopped
1 T. oil
1 onion, chopped
1 pound cubed cooked beef roast
2 T. flour
1 T. ketchup
3/4 c. beef broth
Cook potatoes in a pot of boiling salted water until tender.    Drain and mash.   Mix in butter, finely chopped onion.    Season with salt and pepper to taste; set aside.
Cook carrots in a pot of boiling salted water until tender but still firm.   Drain, mash and set aside.
Preheat oven to 375.
Heat oil in frying pan.    Add onion and cook until clear.    Add beef and cook until beef is warm.   Then stir in flour and cook 1 minute.    Add ketchup and beef broth.    Bring to a boil; reduce heat and simmer for 5 minutes.
Spread the beef in an even layer on the bottom of a 2 quart casserole dish.    Next spread a layer of mashed carrots.    Top with the mashed potato and spangle with shredded cheese.
Bake in a preheated oven for 20 minutes or until golden brown.
NOTE:    This was the recipe I used as a guideline -- I didn't make this quantity for it was just the two of us and we didn't want to eat Shepherd's Pie for the entire week!
Also, you can make Shepherd's Pie with ground beef instead of leftover roast.   Just brown the beef after you cook the onion and proceed with the recipe as shown.
It's Friday and I'm joining Michael at Designs by Gollum for Foodie Friday.
Posted by Martha at 6:22 PM

Oh Shepherd's Pie!
You may actually force me to cook this weekend.
I haven't been cooking much since saying goodbye to all the holiday houseguests. Cooking for crowds -- and nowadays with our Empty Nest, 5 can be a crowd! -- has made takeout Chinese seem awfully good.

:-)
But a pot roast? What a good idea!
The house will smell GREAT and we'll have wonderful leftovers. I'll let you know how it goes.

Hope all's well with you. Dion got groomed today and is in mourning, as he lost his good "boy dog" smell, and now smells like a cheap gigolo.

But I think he smells LOVELY.

Yummy! I do much the same thing with a pork roast and with a ham - except the ham bone goes on to be featured in soup. I love hash!

It is just the two of us as well and I cook a pot roast frequently just to have some leftovers. Sunday dinners were always special at our house and there were usually other family present too. I like the sound of your shepherd's pie so I shall copy and paste.

Hope you are having a wonderful weekend.

I love shepards pie so that is a great idea for the left overs. Usually on Sunday we try to make something we can have for a couple of meals. When I make a roast, hash is my favorite for the next day.
We had a roast every sunday growing up too.

Martha,
Your shepherd's pie looks delicious! I adore your gratin dishes! Stretching your roast beef is definately "good" on the budget and a quite tasty dish, as well! Thank you for sharing three meals from one!
Fondly,
Pat