I'm a needlepointer and have been for years and years.    I put it down when Daughter Sarah was a toddler and eventually packed away the pieces that I had made.     A year or so ago when I was going through things in the attic, I found the pillows and got them out again and put them back in chairs.    And last year when we did our transatlantic cruise I bought another canvas.   It would be, I thought, a good way to keep hands busy on long days at sea.   (It was and I also found out that it was a good conversation starter -- it was also on this trip that I learned that it was indeed a cushion, destined to go in a chair -- rather than a cushion to be put on a chair!)
That pillow was finished while we were in England and I found a Stitchery Shop in Burford (a village quite near) and found another canvas.
It kept me busy the rest
of the trip and I worked on it at odd moments at home.    Not as steadily as the first canvas, however, and so

I must admit that the last bit always goes much quicker and I feel that soon, I shall add my new cushion to the sofa!

And waiting in the wings . . . is another canvas.    This one is full of flowers which shall also look smashing on the sofa! 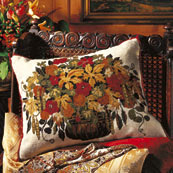 This one I ordered from Ehrman Tapestry.    They have some great pieces and their prices are very reasonable.    This cushion was by far cheaper than either of the other two!     I must admit that I could have ordered several but I refrained -- one at a time . . . and when I am almost finished, then I allow myself to order another!
Posted by Martha at 5:54 PM

Oh, my goodness, your pillows are stunning!!! I just love needlepoint! I have two chair covers that I need to start on. All I have to do is fill in the background but there is a LOT of it. Please do keep us in the loop of how you are progressing.

Martha,
I think you have a lovely "project" in the making! A piece of art, indeed! I, too, did needlepoint when "Mr. Ed" was in the service. While we were living in Germany, needlepoint and cross stitch are two of the domestic skills that helped to keep my sanity while Ed was doing manuevers and the boys were in school. The "stitches" filled many an otherwise empty hour and helped me to focus on something other than my loneliness. I'll be watching for the finished projects!
Fondly,
Pat

That cushion cover will be beautiful - the colours are so rich.
I, too, love needlework....needlepoint and cross stitch. Besides being a wonderful occupation, it is, as you said, a real ice breaker when you're traveling.

Martha,
I am a needlepointer as well. Right now I am in a knitting mode. Then I shall quilt for a while and then back to the needlepoint. Just not enough hours in the day.

It is probably why I get up way too early in the morning!